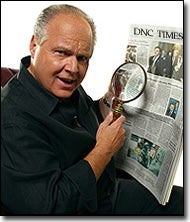 RUSH: Anyway, here’s this New York Times story now. It’s by Helene Cooper. “Now that Mitt Romney has squeaked through with the narrowest of victories in the Iowa caucuses, President Obama and his campaign aides are facing a conundrum as they decide how to tarnish the man they see as their likely opponent in the battle ahead. Do they go the flip-flopper route? Or do they go the out-of-touch, protector-of-Wall-Street route? The two tactics are not necessarily mutually exclusive, and in fact, the presidentÂ’s re-election proponents have in recent days been gleefully highlighting both aspects of Mr. RomneyÂ’s public persona.

“In one portrayal, he is the one-percenter Wall Street type — witness the DemocratsÂ’ display in Iowa this past weekend of a worker who was laid off from a company that was restructured by Bain Capital on Mr. RomneyÂ’s watch. That portrait makes him out to be a conservative ideologue. The other picture paints him as the weathervane-watcher who was for Roe versus Wade before he was against it; who said he believed that humans contributed to global warming before he said that actually he was not so sure about that; and who said he was glad Mr. Obama was ‘copying’ parts of his Massachusetts health reform before he said he would seek repeal of the federal health-care overhaul. ‘Yesterday, Mitt predicted victory. Today, he says 3d would be fine. He canÂ’t even stick to the same position on THAT!’ an Obama adviser, David Axelrod, said on Twitter on Tuesday.”

So the New York Times says Obama’s licking his chops, can’t wait to go up against Romney, and here’s a pull-quote from the story. “It is a high-wire rope to walk — accenting the more conservative parts of Mr. RomneyÂ’s record, while at the same time arguing that he is a politician who is more than willing to shift ground as the ground shifts. There are signs that the Romney-as-ultra-conservative narrative seems to be gaining favor within the Obama campaign.” Now I think this story is fascinating because it is jumping the gun. The presumption here is that Romney’s the nominee, which tells me — and I can’t tell you how many of the professionals and the consultants have told me, not directly, but they’ve let it be known that they think I’m full of garbage when I’ve said the White House wants Romney. I have said for months that I think the White House wants Romney for both of these reasons.

They want Romney so they can run against Romneycare. They think they neutralize any opposition to Obamacare because Romney’s got his own health care plan saddle around his neck and they also want to run against him because he’s Mr. Wall Street. I think they’re set up to run against Romney. Now the media is telling us they’re afraid of Romney. That’s strategic so that we think we should support Romney. But the left is never gonna tell us what they really want us to do, and the left is never looking out for our best interests. So when the left tells us who we’d be better off with, go the other way. And the left has been telling us how worried they are about Romney. Romney would be the toughest for Obama to run against. Now, the New York Times has blown that, the New York Times has a story, Obama chomping at the bit, can’t wait to run against Romney. And my contention is this has been their desire all along. My contention is they think Romney would be the easiest of the likely-to-win Republican candidates.

I know the Republican political professionals have let it be known that I don’t know what I’m talking about — think I’m crazy.