Who Thinks McCain Endorsing Romney is a Great Idea?

RUSH: While all this is going, folks, we’re not gonna ever, ever forget Barack Obama. We are not going to be distracted. Now, Barack Obama is in Ohio as we speak while McCain is endorsing Romney. (laughing) Who’s in charge of this? Who thinks this is good? Who thinks this is helpful? I want to know. There it is: “McCain Endorsing Mitt Romney.” What am I missing? Obviously somebody thinks this is well-timed and a great idea. I’d like to know who. At any rate, Obama is out in Ohio talking about the economy. Now, this is pathetic. He just said — and I kid you not — I read this on the closed-captioning while I was talking to Eric in Billings, Montana. “You’re keeping that extra $40 in every paycheck because I told Congress they couldn’t leave for vacation.” 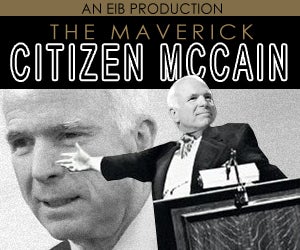 I just pointed out that the New York Times per-issue price increase wipes out your $40 tax cut and then some. Your New York Times per-issue increase of 50 cents is gonna cost you more than your tax cut is. But Obama is out actually saying, “You’re keeping that extra $40 in every paycheck ’cause I told Congress they couldn’t leave for vacation.” I mean, folks, it’s pathetic. We have a president of the United States running for reelection on $40, a tax cut of 40 bucks. Do you remember how Obama fought tooth and nail against extending the Bush tax cuts? That’s real money. That’s not 40 smackers. That’s real money. And he fought tooth and nail against that. Meanwhile, McCain is still endorsing Romney. If they’re gonna do this, you know, do it in ten seconds and then grab the hook. But no.

RUSH: Okay, the McCain endorsement. So I’m listening to PMSNBC during the break and Mark Halperin — I don’t even know where he works anymore. These guys jump around from magazine to magazine. Is he still at TIME? I don’t know. But he’s talking about, and frankly, I had not considered this, New Hampshire loves McCain. This is a brilliant move by Romney because New Hampshire loves McCain. This is perfectly timed. But then a question arose in my fertile mind. Why does Romney need an endorsement in New Hampshire? The polls all indicate that Romney wins New Hampshire easily, so much so that New Hampshire’s considered to be irrelevant now, that South Carolina, that’s the next real focal point.

RUSH: Let’s play a little game here. Let’s just assume for the fun of it that Romney did choose McCain to be his VP running mate like the guy in New Hampshire suggested. What kind of combination would that give us? Here’s what we’d have — and it’s a killer combination indeed, folks! A Romney-McCain ticket: The man who could not beat Obama teamed up with the man who could not even beat McCain. That’s what somebody in the audience in New Hampshire actually asked for today! What a deadly combination.