CALLER: Good afternoon, sir. How are you?

CALLER: Good. And I must say I hear people all the time say when you pick up the phone, “It’s an honor to talk to you,” and they are words, but you have no idea, it’s an honor, it’s a true feeling. Second of all, I wanted to get your take on Donald Trump announcing that he’s going to be running as an independent.

RUSH: Well, I’ve not talked to him about it. I played golf with Trump back in December. I tried bringing this up. This was before the debate that he was doing with Newsmax that ended up being canceled because nobody would show up to it. 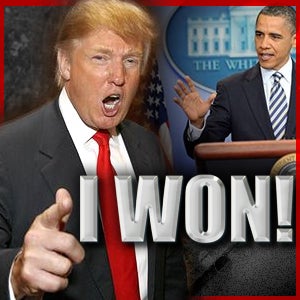 CALLER: You know, but I’m starting to think the same thing because in the beginning when Obama first got elected Trump was out there saying he was better than Bush, this is a bright young man, you know, he’s an up-and-comer, and he stood behind Obama like a sentinel. And then he came out in 2011 and said, no, he’s the worst president, we gotta get rid of him, and then he’s gonna split the vote by running as an independent. Well, that’s just gonna get Obama right back in office.

CALLER: Do you think this is just fanfare, he’s just saying that but there’s no basis to it?

RUSH: Well, I don’t know whether he’s being disingenuous. I’m not saying that. I think that he’d probably drop out before things get too serious. I don’t think he really — you know, look, I’m shooting blind here. I tried to bring this up, he did not want to talk about it. He was not rude about it. He just wanted to talk about golf and his golf course and the tournament and some of the stuff that he had coming up later on that had nothing to do with politics.

CALLER: Well, does this concern you, though?

CALLER: Not at all?

RUSH: No. ‘Cause there’s nothing I can do about it.

CALLER: Oh, no, no, no, I understand that, but I’m just saying as removing Obama from office, this will be an obstacle. A greater one that we already have.

RUSH: Look, people employ all kinds of devices and tools to attract attention. Now, saying that you’re gonna maybe run for office third party ’cause you’re fed up with both parties, well, people are gonna listen to you, people are gonna pay attention. And then when you’ve got their attention, then you do what you really have in mind, whatever it is, I have no idea. I don’t see Trump wanting the pay cut. I don’t see him wanting to compromise his lifestyle. That’s a 24/7, 365 job.

CALLER: I’m sure, but the future of the country’s at stake, so everything is important that we do now.

RUSH: True. It’s true. And look, I have to reserve the possibility here I could be wrong. He could be dead serious about going third party. I just don’t think so. But you know what will happen, I’ll get an e-mail this afternoon when I get home, “Call Trump’s office.” (laughing) So who knows. I’m just doing the best I can answering your question with what limited knowledge I have about this, coupled with a little speculation.

CALLER: Okay, you have said before in times past that you would let us all know when it’s time to panic?

CALLER: And what is your opinion today?