RUSH: I just got an interesting e-mail, and it reminded me of something. I don’t know what it was, ’cause it doesn’t say, that spawned the question in the e-mail. The person wanted to know, “Rush, why was Romney so disliked in 2008?” By the candidates he was disliked, I don’t mean so much by voters. There’s a reason for that. Back in 2008, Romney was the only guy, much as is the case this time around, who had his own independent money. Romney’s independently wealthy, and people have forgotten it ’til this guy asked me this question. I had, too. 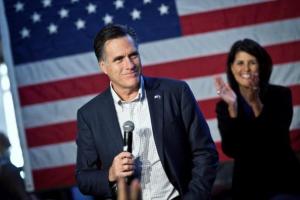 Now, we talk often about how Huckabee and McCain joined forces, but there was a reason for it. Romney was out running a series of negative ads against every Republican, and a lot of them resented the heck out of it, and he was doing it early in the Republican primary. Giuliani hated it. I mean there were a number of Republicans back in 2008 who thought it was unnecessary and gratuitous. And so Huckabee and McCain joined forces in West Virginia and a couple of other states. In fact, you know what I say? Huckabee, he’s out there saying I loved me some Romney back in 2008, what’s happened? I would say, what happened to you? You hated Romney in 2008. You’re lined up against Romney in 2008, you and McCain did your best to take Romney out. What’s changed, Governor?

How come now Romney’s the cat’s meow and four years ago you couldn’t stand the prospect of — just ’cause you’re not running this time around? I don’t recall when you got out of the race in 2008 you lining up with Romney. All these people that tried to take Romney out in 2008 now are in his camp? This is simply party politics. I had dinner the other night with a lovely group of people who still have a high school civics 101 version idea of politics. They think it’s all about ideas. And these people have — I’ll just mention, these people have done a lot to help Nikki Haley. They’re very angry at her now. They’ve done a lot to help Nikki Haley in South Carolina, the governor, and these are Gingrich people, and they think they were led to believe that Nikki Haley would be in there supporting Gingrich.

They were telling me, “We don’t know what happened, Nikki was so… and now she won’t.” I said, “Well, don’t blame her.” I tried to walk ’em through, I said, “What party is she a member of?” “Well, she’s Republican.” “Okay, right, she’s a governor, right?” “Yes.” “To whom do you think she is going to be loyal for her own career advancement? She’s gonna do what the party wants.” It’s no different, you know, freshman members of Congress are brought into the leadership, both parties. It’s part of their party orientation. Okay, look, here’s the way this works here. You’re freshman, and you’re feeling your oats, but you’re nothing unless we help you. You don’t get a committee chairmanship, you don’t get a subcommittee chairmanship, you don’t get a sub-subcommittee. You get no campaign assistance, nothing, unless you support us. If we can count on your vote, leadership, then you’ll go far here. If you’re gonna stay independent maverick, then you’re on your own and we’re gonna be working against you.

It’s no different. It’s a business. It’s the way it works. So they were just sad that Nikki Haley has endorsed Romney. They thought Nikki Haley would come out and endorse Gingrich. It’s not the way party politics works. So I just find it fascinating that Huckabee and McCain, you name it, from the 2008 roster, hated Romney. They were doing everything they could to sabotage Romney. Now four years later, guess what? They are loving themselves some Romney. As the Huckster’s out there saying, they’re loving themselves some Romney. Now, they’re asking me, “What happened to you?” Well, yeah, there’s no McCain in the race this time around. Every race is different. In 2008, Romney had an entirely different position among the candidates than he does now.

I haven’t changed. I’m still who I am, my ideas, I’m consistent. I don’t change. And, by the way, I don’t recall endorsing anybody in 2008. And I think, you know, after McCain got the nomination, we did our best. There wasn’t a whole lot that could be done but we gave it our best here. We did, Snerdley. We did. After the nomination took place. But I think the question’s only being asked half correctly. Huckabee wants to run around and say, “Oh, Rush is being a big flip-flopper. Rush flip-flopped!” No, you’re flip-flopping. Governor Romney was actually targeted by Governor Huckabee. Governor Huckabee actually took steps to take Governor Romney out and now he is loving himself some Romney. The question I think is for Governor Huckabee. What’s changed? What’s different? Of course nobody’s asking the question but me.

But anyway, the reason for bringing all this up, was this question I got from people, why is Romney so disliked? And I think with all of this money that Romney has spent — Romney hasn’t, but his super PAC against Gingrich, it’s a multimillion-dollar attack on Gingrich. And I think, I could be wrong, but I think that may come back and haunt Romney because others have learned from him. So people like Ron Paul now and a lot of the other candidates are now engaging in these scorched earth tactics because when Romney did it against Newt, it worked.

I think it’s unfortunate it’s come to this. I don’t like seeing any of this transpire. But this is why Giuliani doesn’t support Romney. It’s why Fred Thompson hasn’t come out for him. It’s because they don’t like the super PAC spending all this money in scorched earth and they remember it’s what Romney did in 2008. Now, it’s also fair to say, hey, this is politics, this is what happens and money is the way this is — and that’s all true, too. I’m not condemning Romney, don’t misunderstand. I’m just saying that you start this process, you demonstrate that it works, you’re gonna cause copycats, and it’s now starting to take place. Several others who were dealt this way by Romney or Romney’s PACs in 2008 are now starting to respond in kind. The media keeps asking, for example, what’s Newt’s problem with these attacks? I mean this is politics. What the hell does he expect? And these are not attacks. Newt’s engaged in self-defense. Newt was wandering around minding his own business, he got hit, he got hit, and he got hit, finally some people have sent him enough money that he can retaliate now.

It’s not Newt that’s doing the attacking. It’s Newt that’s doing the defending. And, you know, Romney took a chance, it helped him in Iowa, he was able to really cut Gingrich off at the knees in Iowa, and he showed the others that it’s okay to slam away that way. So they’re now slamming away, everybody is slamming away at everybody on the Republican side. It’s just once it starts and once it’s shown to be effective, then here come the copycats. So Newt now is going after Romney on this Bain Capital business, and you might say that they’re not defensive, but I don’t know that Gingrich would be doing this had Romney not taken the steps he took in Iowa. But Newt’s out there saying, (paraphrasing) “This guy, he’s not a conservative. All he does is go in and take over companies and fire people, lays ’em off. This isn’t capitalism.” He’s laying into Romney the way the Democrats are going to. Bain Capital is going to be the Halliburton of 2012 if Romney does indeed get the nomination.

Bain Capital is Romney’s hedge fund investment firm, and they did, they went over, they bought companies and in not very many cases but in some they downsized, let some people go, which is what happens, you streamline. One of the reasons the company was for sale was it was in bad shape, you buy it, you have to streamline it, make it more efficient, and that involves laying people off. Now, grab sound bite 34. Romney, you have to tell me if he stepped in it here. (interruption) No, I know, Newt’s ad on Bain Capital looks like something the Democrat National Committee will put out, and just like I didn’t like in 2000 when George W. Bush said he wasn’t gonna balance the budget on the backs of the poor. No! He was talking about compassionate conservatism, using the language of the left.

I know it’s to get the moderates and the independents and so forth, and Newt is using the language of the left in going after Romney on Bain Capital. That makes me uncomfortable, too. That’s what I mean: Once this stuff starts, Katie bar the door. So this morning in Nashua, New Hampshire, at a Chamber of Commerce breakfast meeting, Mitt Romney had a few words, and among those words that he spoke were these…

ROMNEY: I want individuals to have their own insurance. That means the insurance company will have an incentive to keep you healthy. It also means that if you don’t like what they do, you can fire them. I like being able to fire people that provide services to me.

ROMNEY: If someone doesn’t give me the good service I need I want to say, “You know, I’m gonna go to somebody else.”

RUSH: Okay, now, there are — let’s see — one, two, three, four, five, six, seven words here that are going to be: “I like being able to fire people.” You can see the ad now, can’t you? A smiling Mitt Romney with the biggest grin, biggest smile they can find — huge — right in the middle of the TV screen; underneath it: “I like being able to fire people.” Newt will run an ad that says, “See, I Told You So!” (laughing)