RUSH: Romney’s speech last night, his acceptance speech was one of the best that he’s given. We have three sound bites to illustrate. Here’s the first:

ROMNEY: President Obama wants to put free enterprise on trial, and in the last few days we’ve seen some desperate Republicans join forces with him. (crowd booing) This is such a mistake for our party and for our nation. The country already has a leader who divides us with the bitter politics of envy. We have to offer an alternative vision. I stand ready to lead us down a different path where we’re lifted up by our desire to succeed, not dragged down by a resentment of success. (cheers and applause) 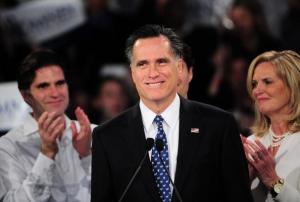 ROMNEY: Our campaign is about more than replacing a president. It’s about saving the soul of America. This election is a choice between two very different destinies: President Obama wants to fundamentally transform America; we want to restore America to the founding principles that made this country great. (cheers and applause) He wants to turn America into a European-style social welfare state. We want to ensure that we remain a free and prosperous land of opportunity.

ROMNEY: This president is making the federal government bigger, burdensome, and bloated. I will make the federal government simpler, smaller, smarter. (wild cheers and applause) He raised the national debt. I will cut, cap, and balance the federal budget. (wild cheers and applause) This president has enacted job killing regulations; I’ll eliminate them. He lost our AAA credit rating; I’ll restore it. He passed Obamacare; I’ll repeal it!