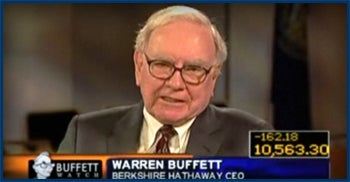 Now, what does Warren Buffett do that is significantly different than what Romney did at Bain Capital? That is my question. In fact, ladies and gentlemen — by the way, this is me defending Romney better than he defends himself, just so you know. You can argue that what Romney does is a lot more noble than what Warren Buffett does, in this way. Warren Buffett buys into fat, healthy companies. I remember once, the primary owners of ABC, Cap Cities, the head honcho, Tom Murphy, Murphy and Burke, the dynamic duo. And I remember I had occasion to be in their presence one day and they just happened to let it slip that they do whatever Warren Buffett wants done. He was the huge investor at the time in Cap Cities/ABC.

I just mention that not as a criticism of anybody, don’t misunderstand, just it’s an illustration of how he buys into fat and healthy companies and then sucks a lot of money out of them in management fees. That’s one of his strategeries, even though the companies were doing great. Bain Capital did under Romney and still to this day, Bain Capital goes in and tries to turn around companies that are on the rocks, that may not survive. And with a lot of these companies, it’s usually a question of Bain or bankruptcy. For example, if Bain had wanted to try to buy Solyndra and save ’em, would anybody in the regime have hated Bain Capital? No, they’d-a loved ’em if Bain Capital would have moved in there and tried to help Solyndra, as an example, as an illustration.

So for many of these companies that Bain acquires, Bain’s the last hope for these companies to stay in business and keep their employees. Bain Capital saves, you could even say creates, jobs, which is more than Obama has ever done. But my only point is that Warren Buffett essentially does same thing. I mean, a different strategy, buys into healthy companies, but he’s just as big a capitalist entrepreneur as Romney was. See, Buffett plays it smart strategically. He says, “Yeah, I’m not paying enough taxes.” Oh, what a great guy. What a great guy. “I’ll pay even more taxes than I’m supposed to.” Oh, what a great guy. And that, ladies and gentlemen, is one of the reasons why so many high profile people spout the liberal line, just to prevent any heat descending on ’em.

“Are you saying, Mr. Limbaugh, that Mr. Buffett doesn’t really believe what he’s saying about taxes?” I don’t know, but I’m telling you that what he says on taxes buys him a whole lot of insurance. What he says about estate taxes and what he says about his family shouldn’t keep anything of what has a earned, the government should get it all, I guarantee you it buys a lot of goodwill in the media. And I happen to know — and this, folks, is a personal bugaboo of mine, I just… “hate” is too strong a word. Pet peeve, close to it. I have a pet peeve with people who say and do whatever they do to curry favor with the media. Phonies, I despise ’em. I know it may be smart, but it’s something I couldn’t do. I couldn’t be that disingenuous. Some people find it so easy to do, I just have a resentment for it. But I’ll guarantee you that Warren Buffett could not have become Warren Buffett believing what Barack Obama believes.

Warren Buffett could not have become Warren Buffett by having to live under policies implemented by Barack Obama. If Barack Obama or someone like him had been president during Buffett’s life there would be no Warren Buffett. And I contend that Buffett knows it, is my point, but that Buffett has made a calculation, and Gates, and all these other guys, made a calculation that they can go through life heat-free by simply saying they’re pro-choice, that’s a big one; that they are for open borders, let the illegal immigrants come in; that they are for paying higher taxes. If they spout the liberal line while living the pure capitalist lifestyle, they will be excused, and, in fact, they’ll be heroes, and other leftists will want to be just like ’em. And then the media will say, “See, you can be a big lib and still be a big successful capitalist.” No, you can’t, is the bottom line, you can’t.

So here’s Romney, on the other hand, who’s a much smaller version of Buffett and happens to be honest about it when he goes out and says, (paraphrasing) “Well, yeah, you have to be able to fire people. I like being able to fire people that aren’t doing the right kind of job.” And that’s controversial, and that results in a statement that makes him politically weaker? That’s absurd! It happens every day in this country. It’s absurd because it’s a reality. So, are we supposed to go through political life not able to be honest in order to succeed? Is that what we’re being told, you cannot be honest in politics and succeed? You have to lie; you have to make it up; you have to have a spin policy, a PR strategist; you have to say things that you don’t believe in order to get where you want to go? 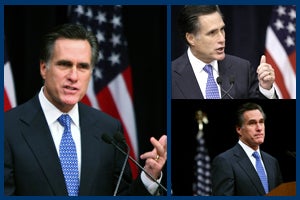 He wants you to think he is, all for the furtherance of an image that allows him to be insured or inoculated against mainstream criticism, mainstream media criticism. That’s what he seeks. That’s the vacuum in which he hopes to live in. In fact, not just that, he wants to be idolized by ’em — which he is! So… (interruption) Yeah, I know. Cap City fired a lot of people. In fact, I’ll tell you something. I will tell you something: If it weren’t for the fact that Cap City fired people when they took over ABC, this show wouldn’t exist. The man who was my original syndication partner was given his walking papers when Cap Cities merged with ABC, and part of his retirement package was two hours of satellite time that he was allowed to program and profit from if he could.

And after an exhaustive international search for talent, he found me — and the rest is history. And it wouldn’t-a happened if Cap Cities hadn’t fired him, and Bain Capital had nothing to do with it. Mitt Romney had nothing to do with it. They got rid of a lot of people that worked at ABC. Soap operas. (interruption) Oh, yeah, I’ve met Warren Buffett. I’ve played in Warren Buffett’s charity golf tournament on 9/11 when the Twin Towers were hit and FAA ordered everybody down. We had 45 minutes to get on the ground. That wasn’t enough time for me to get back home, so I landed in some obscure airport around Orlando and had to drive back, and I got here at 2:30. I was on the way to Omaha. It was gonna be my second consecutive year playing in the Warren Buffett charity golf tournament.

He’s a nice guy. He’s funny as hell. He’s eminently likable. (interruption) No, I don’t know everybody. But, yeah, I’m just sitting here and it’s striking. Buffett is twice, three times Bain Capital — and our guys don’t even have the guts to go after Buffett! No, our side goes after Romney — and I know why. We’ve discussed it. Some of the stuff. Newt just is livid over the super PAC, the ads that were run against him in Iowa. It’s payback time. Now, Rick Santorum is even upset about it. Santorum has defended Romney, and he doesn’t like to.

He doesn’t want to have to defend Romney because Romney’s the front-runner, but Santorum says that this rhetoric coming out of the campaign ads for Newt and Perry “is putting our whole free-market system into question,” and he’s right. He said, “It’s this hostile rhetoric, which unfortunately — and I don’t want to stand here and be a defender of Mitt Romney — but, unfortunately, even some in our own party now, even some running for president will engage in with respect to capitalism. It’s bad enough for Barack Obama to blame folks in business for causing problems in this country. It’s one other thing for Republicans to join in on this,” and he’s exactly right about that.