Denver Lost Because God Was Watching the Huckabee Forum on Fox

RUSH: At the very end of this program — and some people may have not heard it, so I could skate by saying, “No, I never said it, there’s no way, you didn’t hear it.” But toward the end of the program, I said maybe three words, I forget exactly what I said, but the implication was that I thought the Broncos would beat the Patriots. (interruption) That’s

But I had forgotten something. I had forgotten there was gonna be another Republican debate that night, Saturday night at eight o’clock. It was called the Huckabee Forum. I shoulda known God would be watching that instead of the Broncos and Patriots. So there can’t be any other explanation for this. But that does not count in the Sullivan Group opinion audit. A prediction of a sporting event does not even qualify as an opinion in an audit. And besides that, the Sullivan Group audit ended long before my prediction on the Broncos. In fact, you’re the only people I told that I thought the Broncos would win. Everybody, all of my friends asking me, “What do we do?” I said, “Take the home team this weekend.”

The stats are that 75% of the home teams win. That’s the only one it didn’t work out for. I was right, I said, “Pick the home team. If you bet all four, pick the home team, you’re gonna have a 75% winning ratio.” You do, it’s the best weekend in the world, the stats are reliable. Home team wins. And what was the only exception? Giants at Green Bay.
(interruption) How do I explain what happened to the Packers? I think there are a lot of factors. Aaron Rodgers hadn’t played in 20 days. He took a week off in the final week of the season once they had blown their chance to go perfect season. Then they had a bye week. You could tell the timing was off, didn’t look like the Packers at all on offense.

Meanwhile, the Giants just kept playing and playing. Their momentum kept building and building and building. The Giants were clearly the better team yesterday. They’re peaking at the right time, just as they did back in 2007. These next games are gonna be, you know, the Patriots, that’s a lock over the Ravens. And the Giants and the Fort’iners, I’m gonna have to think about this one, ’cause both teams peaking, playing right at just the right time. 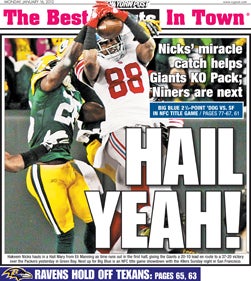 RUSH: You know, any way you slice it, Tebow did pull off a miracle in the playoffs. Tim Tebow did. He had atheists praying to God that he would lose. So even that, you’d have to say, is a major, major achievement. Senator Jim DeMint (R-SC) has announced he is not going to endorse anyone in the South Carolina primary. That may be a bit of a blow to Romney. Maybe the Huntsman endorsement will probably make up for that. (laughing) Just kidding. No, seriously, this is interesting, folks. I’ll go through this pretty quickly because of the constraints of time, the previous segment. It’s like asking me, “What happened to Green Bay and the Giants?” It’s real simple: If you look at the Green Bay defense, they’ve been giving up 400-plus yards a game. 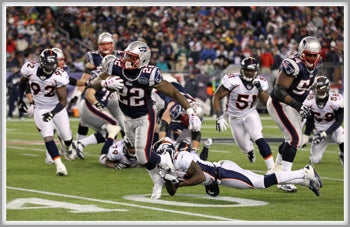 It’s the playoffs. I don’t care what the stats are in passing. If you can’t stop anybody, and if your offense sputters, “Sayonara,” and that’s what happened. The Green Bay defense just wasn’t able to stop the Giants, and the offense had a bad day. They weren’t able to overcome it, weren’t able to overcome their own mistakes. The Patriots have a horrible defense. They have been Swiss cheese. They’ve had to score a minimum 30 points a game this season to win. One of the reasons Brady is so fired up, by the way, is because of that, being a little ticked off. But they got the best-of-all worlds. They get the Baltimore Ravens come in and that team as constituted right now and the way they’re playing, that offense can’t score more than 20 points. Brady can have an average day and win that game. You got the Fort’iners and the Giants, and that’s a classic game on the board. Who knows how it will end up.