Dingy Harry is Full of It

CALLER: Master Maha Rushie, this neophyte grasshopper slips carefully across the rice paper to bask in the majesty of your wisdom and intellect and offer a humble observation.

CALLER: Joanne was headed somewhat in the right direction, but she missed your point earlier in the program, and that is that it’s all about ideology, and it is all about ideology. And these moderate conservatives and these Tea Party members that are in favor of these isolationist candidates are going to keep splitting the vote, and we are running out of time. In about 60 to 90 days any of those candidates out there that are truly conservative, that would run against these RINOs in the Senate and in the House, they’re gonna have to declare. And if they don’t have confidence in who’s going to be the nominee, they are not going to declare. And Reid and the Democrats have already recognized this. He came out this weekend and stated that the Republicans, he hoped they had learned their lesson from the Tea Partiers and not to listen to ’em, and he hoped the Tea Partiers would stop interfering with government. And he knows that between the media, the Democrats, and the establishment Republicans, that Romney and his like will fold like a cheap lawn chair. And they cannot withstand the media scrutiny, and that’s what’s going to promise us possibly 12 years of Democratic control of the Congress and the Senate. 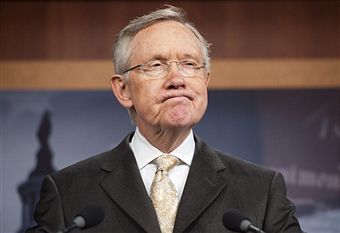 RUSH: Well, I lost track of your — I’m still fixated — obviously you are criticizing Ron Paul in there. Correct?

RUSH: You’re criticizing Ron Paul as a pseudo-conservative who is attracting people under false premise?

RUSH: That this is splitting the vote?

CALLER: And the moderate conservatives and the evangelicals.

RUSH: Okay. And that would be McCain, Romney, so-and-so?

RUSH: You know, our caller from Mississippi was making a really, really good point on this Harry Reid business. What Harry Reid really wants everybody to forget is the midterms in 2010. That’s what Harry Reid wants everybody to forget. With Harry Reid’s words over the weekend, he’s trying to confirm in the minds of Republicans that the Tea Party will read them astray, and he cited the battle that the Republicans took this huge PR loss on with Boehner and the boys on the extension of the payroll tax. Dingy Harry said he hoped the Republicans “learned a lesson,” quote, unquote; “learned a lesson,” talking about the fight House Republicans put up in the payroll tax holiday debate in December.

He says, “It was a disaster for them politically,” and it might have been at the moment, but it’s not now, people have forgotten, it’s not a thing that’s gonna be remembered. (chuckles) Well, some Republicans may remember it, but it’s not gonna be a presidential election issue when we get to November. Harry Reid and the Democrats are scared to death of the Tea Party caucus in the House of Representatives. They are scared to death of it. The Tea Party caucus in the House is what is the doorjamb, if you will, on legislation being rubber-stamped in the House and Senate; and he is trying to intimidate Republicans by saying, “You’re gonna lose PR battles, you’re gonna lose image-wise if all these Tea Party people have their way.”

He’s saying, “I hope you learned a lesson. We cleaned your clock in that payroll tax extension debate. We embarrassed you, and it was because Boehner and the boys had to pay attention to the Tea Party people.” What they really are afraid of is conservatives and conservatism triumphing or winning and they don’t want anybody to remember the midterms, the November 2010 midterms. That’s what they want to wipe from everybody’s mind. If they could do that, that would be huge. November 2010 was a shellacking for the Democrats, and it was independents and Republicans coming together to vote against Obama and his policies as often and as frequently as they could and as far as down the ballot add as they could go.

It was a devastating defeat for the Democrats, and natural Dingy Harry and every other Democrat would like to recast that election. Position it as a quirk of fate. Over the weekend, Dingy Harry also called the Republicans in Congress “obstructionists on steroids.” He obviously thinks that we have forgotten that he said just last week that no matter who the Republican nominee is, if he’s elected, Harry Reid will not work with him. Harry Reid said, “No, I’m not gonna work with whoever you nominate,” while we are being told that we have to elect a candidate can work with the other side, to get along with people, “Gotta come together.” The Senate majority leader is out publicly saying, “I’m not gonna work with whoever the Republican nominee is if he wins. No way, Jose. It ain’t happening.” Yeah.

Democrats had not produced a budget. They haven’t done anything they’re constitutionally required to do. It’s all been politics. Pure and simple. But this whole notion that the Tea Party’s a bunch of extremists and the Republicans had better learn that, and they should ditch ’em? The Democrats, if we will just have the courage to listen, will tell us every day what they are really afraid of. Do you think Harry Reid is really interested in Republicans doing the right thing? I mean, doing things that will help them? You think Harry Reid is really motivated by having the Republicans do well and elect people that will do well from the Republican point of view? Hell, no!

Harry Reid is telling us they’re scared to death of the Tea Party, and they’re ticked off at ’em and that the Tea Party is the only thing stopping them from getting done what they want to get done. The Tea Party is the only brake of Obamaism. That’s what Harry Reid’s telling us. Now, whether our people have the courage to admit this to themselves is another matter. (interruption) Well, no, I doubt it because what happens, the Democrats and the media start ripping into Sarah Palin, what’s our party do? Throw her overboard! Did they not? It’s sad but true. “We can’t have the media saying that about our candidate. We don’t have a prayer.” I can’t tell you number of people I know who said, “Rush, you gotta drop Palin. They’ve destroyed her.”

“Yeah, we gotta nominate somebody they can’t destroy.”

That’s what he’s doing? When he tells us, ‘You guys gotta get rid of the Tea Party, they’re embarrassing you,’ he’s doing this for our benefit? Harry Reid, who said last week he’s not gonna work with whoever wins the Republican nomination if that person is elected president?” Why is it so hard to believe these people? We sit around, we demand truth all the time, we get it from ’em (actually a camouflaged way), but what’s so hard about believing them? I remember blowing up some guests at my own house, at the dinner table. I literally blew up. I think I told you people the story. I lost my cool, I lost my patience because these guys were telling me. They’re just quoting media report after media report how stupid Palin was.

They said, “Look, they’ve destroyed her. We’ve gotta move on.”

I said, “Thanks. I don’t want to have you guys in my foxhole if I’m ever in one. You run around and you have a white flag in your back pocket to wave it whenever it’s convenient? Since when are these people trying to help us?” Harry Reid says over the weekend, “You gotta get rid of the Tea Party. If you want to avoid being embarrassed like we embarrassed you in November, then get rid of them,” ’cause Harry Reid said, “I don’t want to embarrass you guys! I actually want to work with you. I would like to help you guys win something now and then.” That’s Harry Reid? Right. We’re gonna believe that? God help us.