RUSH: An amazing debate last night. I’ve been taking the temperature of people who watched it and I always find it fascinating. I was jumping out of my chair last night on a couple of occasions, because I’m the one who said — and you all know — all this would take from the get-go is somebody to consistently, constantly articulate conservatism properly with confidence and good cheer, and that person, if done from the get-go, would end up owning this. And the fact that that didn’t happen throughout the course of the debates, for a host of reasons, highlights when it does happen, like last night.

But I checked with some people and some thought, “Well, yeah, big deal, too little, too late. Romney’s got this in the bag. It doesn’t matter. Everybody watching has already made up their mind. Nobody’s watching whose mind can be changed.” The negativity disguised as people trying to be realistic was a little interesting to me, though off-putting at times, because I’m one who never thinks it’s over. I’m the one who thinks it’s never too late. And I thought last night everybody — except Ron Paul, and this was even good, he was incoherent. I’ll tell you one of the funniest things. Fox obviously had an arrangement with

Twitter, because they read questions that people had tweeted. So there’s obviously some arrangement. It was Fox News/Wall Street Journal, and then there were some tweet questions.

So after the debate, the first thing that happened, before any post-debate analysis or anything, Bret Baier threw it to John Roberts, who was in some Fox studio, and he had to, in the obligatory fashion, run through a segment on what Twitter people thought of the debate. I had the sound down. I wasn’t listening. I had turned the sound down ’cause it irritates me, so I was just reading the closed-captioning. All I was looking at was the graphics. It was hilarious. The Ron Paul robots had taken over Twitter, and the only guy who consistently won on every — I couldn’t believe Fox actually put this up… They had to contractually be obligated to it because they had every candidate listed, and a green bar above the line for positive reaction, a red bar below the line for negative reaction.

And every question, foreign policy, domestic, didn’t matter, there were five or six questions, every question, Ron Paul’s green bar was the same size. Every other candidate was mostly in red. (laughing) Every Republican got negative reviews on Twitter, except Ron Paul on everything had that same giant upside green bar. And I said, “Well, the Paul people stacked Twitter.” And poor old John Roberts, who had to report this as though it was meaningful and objective, about all he said was — at least this is what I read on the closed-captioning — he said, “Well, this is an example of what straight talk will get you.” Meaning Ron Paul is the only guy up there tonight with straight talk. Which, of course, that’s fatuous. But we’ve put together — (interruption) Well, no. I said Ron Paul was incoherent in a positive way. He needed to be incoherent. The Ron Paul influence needs to be reduced, is what I’m saying here, he was incoherent.

His foreign policy on Bin Laden and Saddam was incoherent. And Ron Paul gave everybody a chance last night to see what he really is and what he really believes. And another good thing to point out was the field has been winnowed. Huntsman wasn’t there and, sadly, Michele Bachmann wasn’t there. There were only five people and it made for a much better debate. There were actual debates. Bret Baier strategically made the decision a couple times just to shut up and get out of the way and to hell with the format and to hell with the time limits and let people go at each other. It was actually, in a couple of instances, a couple of cases, a really genuine debate, rather than an extended, protracted interview session, like a Meet the Depressed or a Sunday morning format. 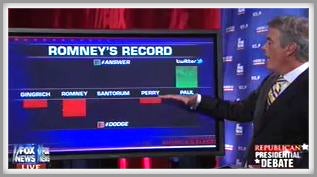 Perry did better. They all did. (imitating Perry) “South Carolina is at war with the federal government.” They all did well. And Romney did, too. Romney, he did enough to maintain his position. And everybody was firing both barrels at him, his tax returns, Bain Capital and so forth. But Newt, as Frank Luntz pointed out last night post-debate, Newt is the only candidate to get a standing ovation in a debate ever that anybody can remember. And it happened in a back-and-forth with Juan Williams. This was classic. I’m gonna play it for you very soon here as the program unfolds before your very eyes and ears.

Newt did something last night that was new, for Newt, that he hasn’t done in previous debates. He had Juan Williams acting as the provocateur. Juan Williams, of course, is black, so Juan Williams was asking the black racial oriented questions on Martin Luther King Day. And one of the questions he asked was, “Mr. Speaker, you’ve been saying that young…” I’m paraphrasing now “…you’ve been saying that young black kids need to take janitor jobs and so forth. Don’t you understand how that can be insulting and off-putting?” And Newt said, “No, don’t understand that at all.” And then proceeded to explain how that is a great starting thing for anybody to learn the concept of work and getting paid. He had a great line and, at some point in it, which you will hear if you missed it last night, he got a standing ovation.

The thing that he did that was different is he never said one word of it to Juan Williams in the sense he never (as in previous debates) looked at media guy who asked the offensive question and said, “This is what you media people always do. You’re trying to get us fighting. Let me tell you about the media.” He didn’t even mention the media at all. He took the question and he answered it. He swung for the fences and hit a grand slam, did not mention Juan Williams’ name, did not accuse Juan Williams of ill motives, just answered it. To me, it stood out as a different strategery for him to get the same thing accomplished.

Because what happened in that debate last night — if you watched it and you saw the applause, you may have seen that standing O — every time 100% conservatism was explained (in a positive, enthusiastic, cheerful way) it just drew unstoppable, positive reaction from the crowd. It was the greatest illustration yet of what the thirst is for, of what the hunger is for, and what it will have been that wins, or would have been that wins. It was everything that the establishment Republicans don’t want to hear and don’t want to see. I have to say I think it was the best debate yet. It was Newt’s night but they all did well. This was Newt’s best debate so far, by far — and most of his have been good.

It’s gonna boost his standing with people who think it’s important we nominate somebody who can go toe-to-toe with Obama in the debates. Obama doesn’t stand a prayer. If Newt were the nominee and had a night like Obama had last night, Obama doesn’t stand a prayer, in the debates. Now, Obama’s probably not gonna agree to do very many debates. There’s no way Obama’s gonna agree to do three. Max two. Why should he? (interruption) To hell with standard fare! He’s got more to lose, the more debates he does. He’s got nothing to defend. He can’t. There’s no law that says the sitting president, the incumbent has to take three debates. League of Women Voters may be ticked off. (interruption)

He won’t look like a coward. He can make it look like he doesn’t have time for it. He’s president of the United States; doesn’t have time for these Chihuahuas nipping at his ankles. Yeah, he’s too busy screwing up the country, too busy running around making all kinds of messes here to get distracted here by talking with the extremists and so forth. There’s any number of ways that he could repel it. But, anyway, I have the sound bites here, and what I’ve done is I’ve asked Cookie to put together a montage of the Newt statements with the applause left in. I told her, “Leave the applause in. I don’t care how long the sound bites go,” and then we have the bites that stand alone by themselves.

One thing that became crystal clear to me — it’s always is crystal clear, but the thing that surfaced again, made itself omnivorously present last night. It is clear with Obama and his crowd, they want the government to do everything for everybody. Newt had so many great lines: “99 weeks of unemployment benefits, that’s an associate degree.” Ninety-nine weeks in school is an associate school. If it’s 99 weeks on unemployment, what are we talking about here. It’s way too long! The whole concept of Obamacare and what to do about illegal immigrants. It became crystal clear again that the message from the liberal Democrats — and this is the challenge for us — the message from liberal Democrats is that government will do everything for you, that the role of government’s to do everything for. And our message is, “We want to teach you to do it yourself. We want to teach you to do it for yourself and how much better off you are — and everyone else — is if you do it yourself.” That is the message behind Newt’s theory on young poor people taking jobs no matter where they are — in schools, janitor jobs or what have you. So, it’s the ongoing competition that we face. We’re up against people who want to tell people, “We’ll do it for you. We’ll plan your life for you. We’ll plan your health care for you. We’ll plan this or that.”