RUSH: Here is the Newt montage, ladies and gentlemen. This is the montage of the — whatever you want to call them — the home runs, the grand slams, just the salient points that he made during the debate last night.

GINGRICH: I know among the politically correct you’re not supposed to use facts that are uncomfortable. 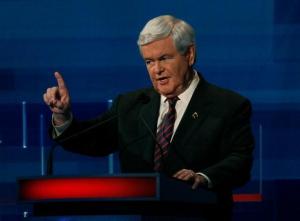 GINGRICH: So, here’s my point, I believe every American of every background has been endowed by their creator with the right to pursue happiness — and, if that makes liberals unhappy, I’m gonna continue to find ways to help poor people learn how to get a job, learn how to get a better job and learn someday to own the job.

GINGRICH: The Social Security actuary estimated, if you make it a voluntary program, you actually reduce wealth inequality in America by 50% over the next generation because everybody becomes a saver and investor and you have a universal investing nation.

GINGRICH: Andrew Jackson had a pretty clear-cut idea about America’s enemies: Kill them.

GINGRICH: We actually think saying to somebody, “I’ll help you if you’re willing to help yourself” is good —

GINGRICH: — and we think unconditional efforts by the best food stamp president in American history to maximize dependency is terrible for the future of this country.

RUSH: All right. That’s a montage, and, as we go further, we’ll play the individual questions and hear those answers in context as they happened. And the standing O came from the answer, “Here’s my point. I’m gonna continue to find ways to help poor people learn how to get a job, learn how to get a better job, and to learn someday how to own the job,” and the place erupted! The place erupted, and we all know why it erupted. The place erupted because people on the Republican side of the aisle are thirsting for somebody to say what they believe in a philosophical sense, in an ideological sense. This country is under assault from people who want to strip away all of our humanity. They want to take away all of our individuality. They want to make every decision for us because they have an inherent view that we are all incompetent.

They treat us in a condescending manner. They’re better than we are. They look down on us. They want to manage and control every aspect of our lives, and the people in the Myrtle Beach building last night and the audience watching know full well what made this country great, what full well is needed to continue this country’s greatness and to save it from the assault that’s being waged on it by Barack Obama and the liberal Democrats. And they don’t hear it articulated! They hear instead people afraid to be critical of liberalism, afraid to be critical of Obama. So somebody last night cast aside the fear and just hit them between the eyes — I mean the left — with what’s wrong about what they do and what they want, and what’s right about what they want and how what we want is great and good for everybody! It doesn’t matter their gender or their skin color or their sexual orientation.