Scott Walker: A Man on the Bleeding Edge

RUSH: A couple of things here about Governor Walker in Wisconsin. You are looking at somebody on the bleeding edge, not just the cutting edge. This guy is at the forefront of where every other governor in this country is gonna eventually end up. The unions, state employee, public employee unions are bleeding every state dry. He took them on. He has turned a $3.6 billion deficit into a projected $300,000 million surplus, all because the state employees are paying a portion — not all, a portion — of their benefits, like the people in the state who work for them pay for their own stuff. Now, the Illinois method of trying to deal with this was to raise taxes 66%, and it did not help them. It’s killed them — and that decision was made by a lame duck Democrat legislature in Illinois. 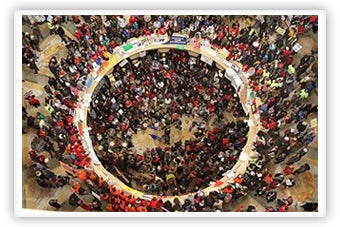 Scott Walker is doing everything that every other governor eventually is going to have to do. John Kasich gave it a shot in Ohio. As I say he’s more than the cutting edge, he is the bleeding edge. The other governors are not gonna have any choice. It’s either do this or go Greece. Indiana is doing exact same thing, and Mitch Daniels there is triumphing as well. Now, I want to tell you. Scott Walker… I mentioned this Heritage Foundation speech I did here last fall. He was in the audience, and it was in the midst of that period in Wisconsin where all the Democrats had fled the state and refused to vote on his legislation. It really is, in the state of Wisconsin,a story of Sanity versus Thuggery.

It is a story of the entrenched, big government bottom feeders trying to hold onto everything they have at the expense of the people who pay them. It cannot be stated enough. Under Scott Walker, in Wisconsin, the unions — state unions in Wisconsin — have exactly the same powers that the federal unions under Obama enjoy. That’s what he’s dealing with, and he is courageously fighting it — so much so that they’ve got this recall effort to send him packing, and they are accepting signatures “Mickey Mouse” and “Adolf Hitler.” They will be counted on these recall petitions! Now, you say, “How is that possible?” There’s only one answer to that: “Democrats!” That’s how it’s possible.

Who is it that opposes proper identification, photo ID, to vote? It’s Democrats. There’s only one reason to oppose that, and that is you want to cheat. There’s only one reason. You have to submit a photo ID for practically everything in life — to get on an airplane, you name it — but when the same thing is mentioned about voting, here come the Jesse Jacksons of the world talking about racism and discrimination and trying to deny voting rights. It’s absolutely absurd. They’re admitting they want to cheat. What the hell is this, Mickey Mouse and Adolf Hitler signatures count on recall petitions? Somebody who hasn’t lived in the state but 28 days moves in, rents an apartment for a month and leaves, counts?

But it is what it is, and this is what he’s up against. He knows it, by the way. He’s not bellyaching about it; I am. He’s just dealing with it as needs to be said. But this is the battle that every state is going to be facing at some point because they cannot print money, and, at some point, they can’t borrow it. They have to be able to pay it back. You have to have a photo ID to vote in union elections! The very same people who demand a photo ID in union elections oppose it in statewide or national elections. There’s only one reason. There’s only one reason that Adolf Hitler counts as a signature or Mickey Mouse counts: You want to cheat.

We’ve decided it’s much easier just to play by the rules and trying to win legitimately as it is to cheat. You spend less time if you just go for it. All it takes is the right message. Governor Walker’s got it. Everything that he said his policies would result in have happened. He has shown that the unions in Wisconsin are lying. All of these end-of-the-world predictions about what life would be like for people in Wisconsin have not manifested. Just the opposite. People in Wisconsin have received their property tax assessments, and, lo and behold, they’ve gone down. In this economy, they’ve gone down. You might think, well, that would be enough. In a fair and sane political world, yeah. It would be enough. But if Mickey Mouse and Adolf Hitler can sign a recall petition, there’s no doubt in my mind they can also vote.

So that has to be accounted for, planned for. Not whined about, has to be counted for. By the way, do you know unions are illegal in China? Obama, Thomas Friedman, all these Wizards of Smart love it. Anybody found trying to unionize in China sent to prison. I wonder if — Thomas L. Friedman, Thomas “Loopy” Friedman — even knows that. He’s always advocating we need to be more like China. “A select few elites are making the decision, too many committees, too much legislation, too many people trying to decide this stuff and it gets bottled up. We need a few, maybe ten really smart people making all the decisions,” and Thomas L. Friedman thinks he should be one of the ten. You tried to unionize in China? If you try to pull off in China what they’re doing in Wisconsin, it’s the union that goes to jail, prison camp, reeducation, hard labor, what have you. Good behavior: in six months being sent to a North Korean labor camp.