RUSH: Jim Clyburn of the Congressional Black Caucasians this afternoon on MSNBC Andrea Mitchell NBC Reports, they’re having a discussion about Clyburn’s criticism of Gingrich. By the way, we have sound bites coming on this. The long knives are out for Newt on this “food stamp president” and janitor work for school kids. It was racist. Oh, the media is going nuts over this. It was racist. Wait ’til you hear some of these bites coming up. This is one of them. It’s a little out of order, but I wanted to get to it. To James Clyburn, the former chairman of the Congressional Black Caucasians, Andrea Mitchell said, “Tell me what you think is wrong with the way that Gingrich characterized his outreach, jobs for young people.” 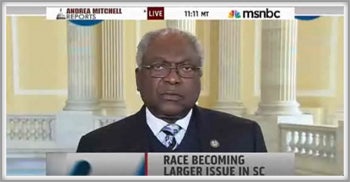 CLYBURN: People who are poor are not suffering from any kind of a work ethic. I grew up pretty poor, but I got up at four o’clock in the mornings and delivered milk on a milk truck before going to school at 8:30, and I don’t need Newt Gingrich to tell me what it is to have a work ethic. What he is talking about is stratifying people. He’s saying that the poor children in their schools ought to be the janitors in their schools so that the other people in the schools, who aren’t so poor, can see them, uh, as their servants.

CLYBURN: To talk about what his daughter may have done, his daughter was never a janitor in the school that she attended — and that, to me, is a double standard.

RUSH: (laughing) So it’s all about servants! The white kids want to be black kids as servants, and that’s Newt’s hidden agenda. Now, we sit here and laugh. I guarantee you, folks, the sad thing about America today is there are a significant number of people who will hear James Clyburn say that and agree — and they’re Democrats, and they will think exactly that. All he’s gotta do is put the thought in their head, and so, “Yeah, yeah, what he’s talking about is stratify! He wants the poor children in the schools ought to be the janitors so that the other people who aren’t so poor can see them as their servants.” There is literally intellectually no way to get there from what Newt said. Zilch, zero, nada, but… (laughing) They’re servants! All of this for just mentioning food stamps. Isn’t Clyburn a public servant Clyburn’s a public servant, frankly, is not doing a good job, either. Not for me. You know, clean was one of the Obama supporters played the race card on Bill Clinton in South Carolina in 2008 — and Clinton did not like it.