How Romney Should Respond

RUSH: Here’s that Wall Street Journal piece: “Mitt Romney’s 15% — After his tax rate news, he needs a big reform proposal.” And here’s a pull-quote from the story. “When he recently visited the Journal, Mr. Romney all but said he didn’t think he could propose a tax reform with lower rates because he’d be attacked as a rich guy. Well, Governor, you are a rich guy, and with the 15% news, you’re going to be attacked anyway. What matters is how you respond,” to this kind of thing. What matters is what you do with it.

This is what, if I might say, without choosing sides here, this is what Newt did with Juan Williams’ question the other night at the debate. He turned it into a teachable, inspirational moment, and he got a standing ovation and he flummoxed Juan Williams and he flummoxed the media and they’re still tied in loops and trying to figure out what happened to ’em on it, trying to mischaracterize it as racism. And as I pointed out on Tuesday, Newt didn’t attack anybody. He didn’t go after Juan Williams. He simply used that question, bouncing off his food stamp comments and young kids doing work, janitor, custodial, whatever, as great training, as great character building. It drew a standing O.

Here’s the Journal piece, excerpts. “Mitt Romney hasn’t yet made the case for lower, flatter tax rates as a boon to economic growth, but perhaps he’ll be inspired by the power of his own example. In South Carolina yesterday the former Massachusetts Governor said his effective tax rate is ‘probably closer to the 15% rate than anything.’ Let the mayhem begin. Mr. Romney said this week that he’d release his 2011 tax return in April, at which point you can expect Team Obama to howl like Occupy Wall Streeters and demand that people like Mr. Romney pay higher tax rates. Rather than play his usual defense by saying he doesn’t favor cutting taxes on anyone making more than $200,000, Mr. Romney could use the opportunity to make the moral and practical case for lower rates and fewer loopholes,” for everybody.

“He might start with a tutorial on tax policy using his own return as Exhibit A. It’s likely that he enjoys his relatively low rate because most of his income is derived from investments, which are taxed at 15% for individuals (after they are first taxed at the business level), rather than wages, which are subject to a top rate of 35%. A big reason that rate on wages is so high is to offset the thicket of loopholes and carve-outs in the U.S. tax code — such as the mortgage-interest and state tax deductions. Why not save on compliance costs and billions of hours in paperwork by eliminating loopholes and taxing all wages and salaries in Mr. Romney’s 15% neighborhood?” Why not make the case for the 15% flat tax?

“Mr. Romney has proposed cutting the corporate tax rate to 25% from 35%, and on Monday he showed a little more reform leg and said he thinks no one should pay more than 25%. That’s a start, but he and the rest of the GOP field missed a chance to explain why. Is it morally right for the government to take more than a quarter of anyone’s income? Does it hurt the economy? Does it really raise more revenue with all those loopholes that Congress inevitably writes on behalf of the powerful?
“When he recently visited the Journal, Mr. Romney all but said he didn’t think he could propose a tax reform with lower rates because he’d be attacked as a rich guy. Well, Governor, you are a rich guy, and with the 15% news, you’re going to be attacked anyway. What matters is how you respond. Newt Gingrich jumped on the news yesterday and called it ‘Mitt Romney’s flat tax,’ in mock homage to the former Speaker’s proposal for a 15% voluntary flat tax. Team Obama won’t be so witty or kind, and it will spend $1 billion assailing the Republican as a morally obtuse fat cat who doesn’t understand the problems of average Americans. If Mr. Romney doesn’t want to spend the campaign defending his 15% tax rate, he’ll get out front and propose a serious tax reform.”
Go on offense, in other words. Explain this. It’s a teachable moment. Income tax and capital gains are not the same thing. And Romney needs to start by discussing the difference between income tax and capital gains tax, investment tax. Capital gains tax is an additional tax on money that’s already been taxed once at the highest level of 35%. It’s not 15% instead of 35%. It only becomes that if you cut out a step. People can be taught.

RUSH: I want to take the Wall Street Journal analysis of Mitt Romney, this 15%, I want to take it a little further. Some other things that Romney could say. And, look, it’s easy for us sitting here at a distance to come up with things. I resent it, still do sometimes. “You know what you shoulda said? (muttering).” But still, I offer my two cents anyway. When all this kerfuffle starts about Mitt Romney, this 15% tax rate, he can say, “Look, we live in America, not some failed Soviet satellite. I favor a flat, or fair tax. I want to get rid of the IRS, or most of it. I favor denying big spending Obamacare liberals our income. I favor putting Obama and his reckless spending radicals on a diet, a diet we call private property rights. We call it limited government. We call it taking our country back.”

Start shouting a little conservatism here. Turn this around and go on offense. This class warfare garbage, it might work in these cloistered campaign circles surrounding Obama, but this is not our country. This is not a country that has been living under class envy all of these years since its interception. This is not about have and have-nots. It’s about protecting all of us from a bloated federal government. It’s about protecting us from everybody who benefits from bloated federal government and never-ending federal spending.

Now, here’s what Romney doesn’t do, all this talk about Romney, 15%, his speech income, he doesn’t know how much, how little and so forth. Let me tell you what Romney doesn’t do. Romney has not played over 90 rounds of golf in three years while everybody is suffering. Romney has not flown all over the world on the federal government’s dime. Romney has not had lavish parties and concerts on the public’s dime. Romney has not lived like a king on other people’s money. He has sent his wife on government jets four hours ahead of him to the same destination. Romney is not responsible, nor is any other Republican, for the 16% unemployment, real unemployment in this country. Romney is not responsible for increased fuel and food costs. He’s not responsible for any of this.

Now, if the left wants to discuss this kind of thing and the media wants to talk about it, let’s talk about it. What financial sacrifices have the Obamas made? What money of theirs do they have that is theirs, that they have earned? How many no-show jobs has Michelle Obama had? How many people get to spend other people’s money like they do and then act like they’re entitled to do it, in the midst of so much economic suffering throughout the country? Mitt Romney’s not up there telling people don’t go to Las Vegas, don’t go to resorts. Mitt Romney’s not up there promising to focus laser-like on jobs and then not do it. Mitt Romney hasn’t grown the federal budget by $5 trillion.

Did Mitt Romney turn down the Keystone pipeline? Is Mitt Romney responsible for rising energy costs and depleting energy supplies? All of this is Barack Obama. Every ounce of misery, economic misery in this country is directly traceable to the Oval Office and the offices of Pelosi and Reid, and every other Democrat on Capitol Hill, and every Democrat staff member. Mitt Romney’s tax rate is not responsible for one deleterious thing that’s happened to any person in this country. Mitt Romney has done more to empower and enrich individuals with Bain Capital and the other things he’s done at the Olympics than Barack Obama could ever hope to do because Barack Obama’s done nothing but ruin people’s lives. And we want to talk about Mitt Romney’s 15% tax rate and how much he makes on speeches, while we don’t talk about Bill Clinton’s $82 million in speeches, his average fee of $181,000 a speech.

And in all of this economic downturn I ask you: What financial sacrifices have the Obamas made? See, one thing Romney could say: “If I’m elected president, I will actually be taking a pay cut, but for Barack Obama the presidency was a path to becoming a millionaire.” The presidency is going to cost Mitt Romney money. The presidency was a path to wealth for Barack Obama and for Bill Clinton. Now, you want to talk about morality and decency and who’s a good guy and who cares about the little guy and so forth? This is all a crock, folks. This is all the way this silly game is played. Of course, it’s frustrating for us that there’s (groans) apparently not a candidate that thinks like I am articulating things here.

I know it’s frustrating, but this is what happens when there’s not a genuine conservative. Newt comes close, in his moments where he shines. If somebody said something like this in a debate, the standing O would never end. The moderators would lose total control of the debate. Plus, everything I said has an added benefit: It’s all true. None of it’s made up. In fact, I just scratch the surface. Nobody ever says this kind of stuff to Obama’s face. They asked Jay Carney yesterday, “Well, what about the Clem transcripts?” Carney said, “Well (muttering). It’s not important. It’s not relevant! What do you mean? He’s the King! He doesn’t have to tell you that.” That’s just their attitude. 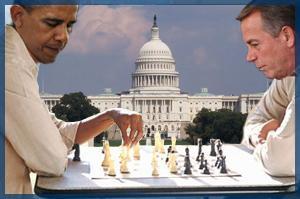 BOEHNER: This is not good for our country. Uh, the president, uh, wants to put this off, uh, until it’s convenient for him to make a decision. That means after the next election. Uh, the fact is the American people are asking a question right now: “Where are the jobs?”

RUSH: Well, yeah. You could hit it a little harder than that, but basically. Now, Rick Perry says Americans should be “unhinged” by this decision. “Asked about the decision expected from the State Department that sources say will call for a rejection of the Keystone pipeline, Rick Perry says, ‘It’s no surprise, but it doesn’t make the decision any better. It doesn’t surprise me, but it’s again the president’s focused more on the next election than on the next generation. Getting this country independent of foreign sources of crude from countries that are not our friends is problematic. This is Canadian oil. There’s a possibility we could lose it to China with that decision. I hope Americans will really become unhinged with this decision. It’s a really bad decision for our country, for energy independence. It sends a horrible message at a time that we’re headed to $4 and $5 gasoline. To have a neighbor who’s willing to sell us crude that’s available and we won’t take it?” Unhinged! In a sane world, people would be. So in spite of this, what is Romney’s crime? What has he done? All he’s done is invest in America. He’s taken his money; he’s invested in people’s companies, jobs, so forth, why in the world should he be punished for this? If you go after Romney, why don’t you go after everybody else on Wall Street? Well, we all know the answer.