RUSH: Let’s go to the audio sound bites, because Nancy Pelosi has opened her cavity. Two things. Pelosi’s out there saying, (paraphrasing) “We don’t really have that much to do with Occupy Wall Street. No, no, no. We’re not tied to that group.” So that’s not gonna make them happy and it’s a clear indication that the Democrat calculation is that the Occupy crowd is a drag on ’em. Then Pelosi, at a Politico Playbook Breakfast yesterday, was interviewed by White House correspondent Mike Allen, who said, “You think the Republican right is intentionally digging in, assuming a loss, staking out their ground for 2016?” Now, when Pelosi says far right, she means the entire Republican Party, you have to understand that about her. She makes no distinction. The entire Republican Party, to her, is the far right. So you have to know that when you listen to her answer to the question. 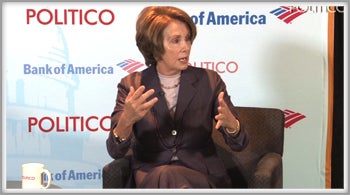 PELOSI: I don’t think they think he’s going to win. If the far right thought that Romney could win, they might be more enthusiastic about him. But they question what he stands for, and they don’t think he’s going to win, so what’s the sell? I’m not sure he knows what he stands for. And that makes it harder, too, because that is — doesn’t instill confidence as to where he might be on some issues.

RUSH: Yeah. So Pelosi, “Republicans don’t think he can win. The far right, he doesn’t know what his core is, he can’t explain it, they don’t think he can win.” Now, you probably recall I, El Rushbo, offering a similar opinion about certain elements of the Republican establishment. It’s not so much that Romney can’t win, it’s that Obama can’t lose, is what they really think. They think that Obama just can’t be beat, and they think it for a host of reasons. They think that too much of the country has been dumbed down. They think that Obama’s got too much money. They believe in the power of incumbency. They understand and don’t think they can do anything about Democrat vote fraud. All those things. They also understand that Obama is black, and they know that they are not going to be nearly as critical of Obama because of that, they’re not gonna really take it to him. So they think whoever the nominee is, is gonna lose. It’s not that Romney can’t beat Obama. It’s that nobody can.

I’m not sure everybody, but certain elements in the Republican establishment that is just what they think — and they do not think that ideology is a factor in elections, not enough people know about ideology, conservatism versus liberalism; and Obama has the power of the purse. He’s spent money, he’s bought votes, and there’s no way they can compete with that. So they think their best chance — and, again, it’s not all of them, but it’s some of them think their best chance — is to pick a moderate who cannot be tarred and feathered ideologically. They believe that conservatism, if somebody is criticized as a conservative, is a guaranteed loser. That’s what some in the Republican establishment think. You know it and I know it, and the liberals are starting to crack because here’s Pelosi saying that the Republicans don’t think Romney can win, but last night on Charlie Rose on PBS, the New York Daily News Washington Bureau Chief Thomas DeFrank; and they had a discussion about the Republican primary, and Charlie Rose says, “Tax returns have — have come back as an issue here, Thomas.”

DEFRANK: (whispering) White House is ecstatic. They’re already getting ready to tee him up in the fall as just another, uhh, robber baron, uh, just like a hedge fund trader —

DEFRANK: — and all this sort of stuff. It fits right into their populist riff and it’s, uhh, gonna be a problem for Romney.

RUSH: Now, this is, I think, another liberal letting the cat out of the bag. They want Romney, and for exactly the same reasons that I have suggested to you they want Romney. It’s exactly the same reason they created Occupy Wall Street, because Romney is Wall Street, Romney’s Bain Capital, Romney’s Mr. Private Equity Guy, Romney’s Mr. 15% tax rate, Romney’s all of this rich robber baron stuff — and now he gave money to the Mormon Church! More and more liberals now are starting to crack. They’re getting, I think, ahead of the game, a little bit uber-confident. The White House is salivating for Romney. Now, you have to admit, folks, that up ’til now (actually sometime last week) the word has been that the White House is scared of Romney. Remember? How many times has that theme gotten out there?