RUSH: You know, folks, I have a sound bite here, and I was going to predict this, but I don’t have to predict it now. Just this afternoon on PMSNBC they got this show called Now with Alex Wagner with a bunch of has-beens, and she had a guest on there named John Heilemann. He is the National Affairs Editor for New York Magazine. They were talking about the Republican primary and the news that Santorum won in Iowa and that Newt might win in South Carolina, notwithstanding this ABC Marianne Gingrich stuff. Which, by the way, folks, I just want to throw out there, and you may think I’m sloughing this off and trying to just stir things up, but how do we know she’s telling the truth? She may very well be, don’t misunderstand. I’m just saying everybody’s assuming without a single doubt. (laughing) I know, you all believe it. I’m not trying to talk you out of it.

So they asked this guy Heilemann, “Does it undermine Romney’s legitimacy that he didn’t win in Iowa?” Now, listen to this guy’s answer.

HEILEMANN: If Gingrich comes back and wins here today, and especially if Gingrich can really battle Romney in Florida, there’s gonna be a hue and cry that’s gonna come up among the Republican establishment, which has always had a lot of doubts about Romney, for someone else to get in this race. Because they’re looking at him right now, and they see a very badly damaged candidate heading into the general election with Barack Obama. If he loses here on Saturday there’s gonna be a lot of talk. I don’t know how realistic it is, but there’s gonna be a lot of talk among a lot of high level Republicans about can we really go forward with either Newt Gingrich or Mitt Romney as our nominee. You’re gonna start to hear that in a lot of chambers in Washington, DC. 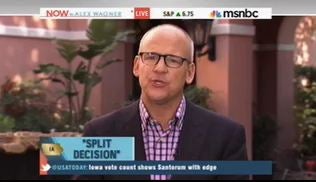 RUSH: I happen to think he’s dead-on right. I happen to think Heilemann is dead-on right. And this is how wishy-washy the establishment is. They have been trying to wrap this up for Romney since before Christmas, since before the Hawkeye Cauci in the New Hampshire primary, the Republican establishment, this is what they have wanted to avoid. Now, what did they know? They didn’t get Mitch Daniels. They really wanted Mitch Daniels. Who else did they hope to run that didn’t run? Not Jeb Bush. There was somebody else in their along with Mitch Daniels. Mitch Daniels was really their first choice. There’s somebody else. Then there was Romney, and all the reason was that they thought Romney was the single least damaging, that if a conservative got the nomination, not only would they lose the White House, they’d lose all the way down the ballot. With Romney they’d at least maybe lose the White House but still have a chance to win the Senate. Oh yeah, Pawlenty. They were hoping for Pawlenty at some point. Then they settled on Romney and they did everything they could to see to it that Romney wrapped it up before the voting even began.

I guarantee you the establishment, whoever they really are, I know that they’re wringing their hands. Some of them might even be calling Herman Cain, saying, “Herman, this stuff with Newt, you know it’s okay to get back in here and screw up things for us. Hey, Herman, what are you doing? We’ll even pave the way for you. Whatever you’ve been accused of is chump change to what Newt’s dealing with. Come on, back, Herman. In fact, there’s no proof in what you were charged with. Gloria Allred took the women back to the sandbox and it’s over with.”

So this is fluid. I don’t want to be an “I told you so,” but back last summer and last fall everybody saying, “You gotta pick a choice.” I can’t. There’s too much that can happen. It’s way too unpredictable. But now I know the establishment, ’cause Romney, Romney doesn’t, for some reason… like Daniel Henninger today has a great piece in the Wall Street Journal about how Bain Capital might singularly be responsible for reviving the US economy at the time it got going, and they say, why can’t Romney defend himself the way Henninger can? And they’re coming to understand that Romney has a tough time defending even what he claims to be his strengths. There’s a lot of nervousness out there.