RUSH: Moments ago, ladies and gentlemen, I told you that Newt had a stage event with a cast of characters out there. We now have the audio from that event. We have two sound bites. It was Newt apparently as America’s grandfather. Here’s the first of the two bites. 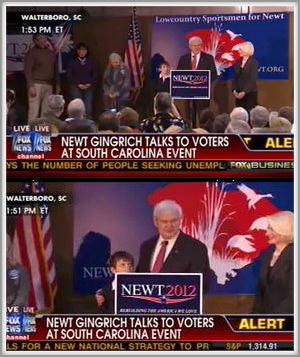 GINGRICH: Robert, come on over. This is our grandson, and we always check in with he and his sister. She couldn’t get off because she actually has ballet the next couple of days, but Robert is — you’re playing hooky. This is an educational field trip for Robert, and I’m thrilled and he’s very good at chess, and he thinks deeply, and he gives me key advice which is mostly to keep it shorter and clearer.

RUSH: And one more bite.

GINGRICH: Maggie, his older sister, who’s 12, is my other adviser. And her basic role is to make sure I smile often enough ’cause I’m too intense, apparently, and so she counts my smiles at every debate. I check in with both of them, and their advice has been pretty steady all the way through. This is their mother, Jackie Cushman, and our daughter. This is my sister, Susan, and we’re looking for — I have another sister I think here somewhere, Robbie, but I don’t know where she is right now, and this is my brother Randy.

RUSH: So that was in Waterboro, South Carolina, it was a campaign event. I think it was the first, maybe the second appearance that Newt had made today since the ABC story had hit. He does, he keeps track of everybody. Newt, America’s grandfather. And the grandkids are advisers. So that was one of his ways of dealing with it.