RUSH: Charles, Largo, Florida, thank you for waiting. Great to have you on the program, sir.

CALLER: Rush, I’ve been listening to you since the eighties. I was talking to a lady friend of mine and mentioned to her some things that I thought politically, and she told me, “You sound just like Rush Limbaugh.”

CALLER: And she told me, and I’ve been listening to you ever since. What I’d like to know today, what’s your take on this Keystone XL thing, what is his motivation for — 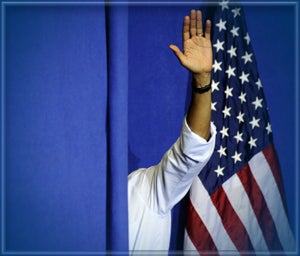 RUSH: First, Obama is running against a do-nothing Congress, right? Who is Mr. Do-Nothing? Barack Obama is Mr. Do-Nothing. We have a do-nothing, job-killing president. The Keystone pipeline is a no-brainer. Let me tell you something, Charles. Even the Washington Post has an editorial today claiming they don’t understand this, that it is a puzzling maneuver. There’s nothing puzzling about this. Barack Obama has staked his fortunes to the so-called green energy industry. Barack Obama hates the oil industry. But more importantly, Barack Obama’s base, his voter base consists of environmentalist wackos. He needs their support. His reelection is not by any means guaranteed.

When you go into any reelection, you have to secure your base. And in his case, the base includes wacko environmental extremists who literally hate anything progress oriented in energy. And they believe all this green energy garbage: wind power, solar power, green this, green that. They believe that oil is filthy. They believe that oil is deadly, oil’s polluting, and there’s too much profit in oil and people are too dependent on oil. So Obama says, “Okay, I gotta remain loyal to those people.” So no Keystone pipeline; no 20,000 new jobs; no expansion of our domestic oil supply and reduction in price; no cheaper gasoline.

If there was ever a man working against the will of the American people, if there was ever a president who is working against the best interests of the United States of America, I haven’t seen one other than Barack Obama. I think this is outrageous. I think Obama’s a Keystone Cop. If he weren’t so seriously oriented toward transforming this country into something it’s never been, I would say he’s a joke. How’s this for a headline? The New York Times: “Rejecting Keystone Pipeline Proposal, Obama Blames House Republicans.” He did. Isn’t that a shock, Obama would blame the Republicans? Somehow Obama reminds me of this Italian cruise ship captain. “I tripped and I fell into the lifeboat.” Except the Republicans are always the ones tripping Obama.

You know why it’s a Republican problem? You know why this is the Republicans’ fault? Because the Republicans only gave him 60 days to assess the risks, and Obama said he needed more time. But Obama doesn’t care about you and me. There’s a Politico headline, and that tells you what Obama wants. The Politico headline: “Robert Redford: Obama stood up to Big Oil — Robert Redford, actor and outspoken environmentalist, applauded President Obama’s decision to reject the Keystone XL pipeline on Wednesday.” So Robert Redford and his adoration is an objective for Barack Obama. So a brainless Hollywood actor is who carries weight with Barack Obama. I mean it is absurd. The Keystone pipeline, potentially a hundred thousand jobs down the road, from a man who claims to be laser-focused on jobs. If there was ever an illustration that the man does not tell the truth, and that his objectives are not the furtherance of this nation’s real interests, this is it. Charles, thanks for the call. Appreciate it.

Janet, Shiloh, Illinois, you’re next on the EIB Network. Hi.

CALLER: Hello, to one of the last men standing. How are you?

RUSH: I’m fine. Thank you very much. I appreciate that.

CALLER: Yes. It’s days like today I realize how much I love you. Thank you. You make me laugh. I mean you opened the show, brilliant. Just brilliant, and I think you’ve got a real — I actually think Newt Gingrich can get more independents than anyone else running. (laughing)

RUSH: Well, it remains to be seen.

RUSH: But remember, this stuff is a resume enhancement. I mean Bill Clinton, open marriage with Hillary.

RUSH: The Democrats thought it was the greatest thing on earth. I mean, this is wonderful. They didn’t even think it was that big a deal that he’s having an affair with an intern.

CALLER: I know, and let’s face it, the independents are frightened of our social issues. Well, Newt’s a guy they can not be so frightened of. I called about Romney. You’ve been asking rhetorically what is it about Romney, why isn’t he getting more than 25% of the vote and I wanted to take a stab at it, figuratively.

CALLER: I believe that he did not get the message of Scott Brown’s election, which is surprising because he’s the guy that gave us Scott Brown. And by that I mean Scott ran on a single message, and he won Ted Kennedy’s seat in Massachusetts — and we must never forget this — by promising to be the vote against Obamacare. And then he won it. The Democrats tried to not seat him, remember all the shenanigans. They seated him. He voted against it and they still got Obamacare by shoving it down our throats, against our will on a single party vote. The Democrats didn’t get the message of Scott Brown. And they got wiped out in November, that next November. Mitt is saying he can work with the other side. We don’t want that.