RUSH: From Bloomberg News: “TransCanada Corp. may shorten the initial path for its rejected Keystone XL project, bringing oil from MontanaÂ’s Bakken Shale to refiners in the Gulf of Mexico and removing the need for federal approval. ‘There certainly is a potential opportunity to connect the Bakken to the Gulf Coast,’ Alex Pourbaix, TransCanadaÂ’s president of energy and oil pipelines, said in a telephone interview today. ‘That is obviously something weÂ’ll be looking into over the next few weeks.’ TransCanadaÂ’s $7 billion Keystone XL proposal to bring crude from CanadaÂ’s oil sands to the Gulf was rejected yesterday by the Obama administration. The project required U.S. approval because it crossed the border with Canada. The company may seek that approval after it builds the segment from Montana to the Gulf, Pourbaix said.”

“The Bakken shale-rock formation is estimated to hold as much as 4.3 billion barrels of technically recoverable oil in North Dakota and Montana, according to a 2008 U.S. Geological Survey report. Oil production in North Dakota surged 42 percent to 510,000 barrels a day in November, exceeding the output of Ecuador.” It is potentially a deposit rivaling that in the Middle East, Saudi Arabia, and it’s one of the best kept secrets in this country. There is a boom in the North Dakota economy because of this, a huge boom taking place. “Production in the Bakken field may reach 750,000 barrels a day this year, Edward Morse, managing director of commodities research for Citigroup Inc.”

Now, “As originally envisioned, Keystone XL would have carried as much as 830,000 barrels a day from CanadaÂ’s oil sands and the Bakken field along a 1,661-mile (2,673-kilometer) path to Texas refineries. The Bakken drilling boom may allow TransCanada to begin building the portion from Baker, Montana, to the Gulf, using much of the original route,” bypassing Canada and its share of the oil, and thereby obviating any role that Obama would have in not approving it. “The company is also mulling whether to build the pipeline from Cushing, Oklahoma, to the Gulf, he said. If customers prefer the Bakken-to-Texas route, Calgary-based TransCanada would build that first.

“Changing the project would allow TransCanada to use existing pipe materials and rights-of-way. The company would apply later for federal permission to connect the pipeline to Canadian oil sands and complete Keystone XL as originally envisioned,” after it would be the last portion to be completed. I like the thinking. Build 80% of it, get it going, have all that oil being transported from Montana, North Dakota, down to the Gulf, have it show up, have it become part of the US economy, then add the Canadian end of it. The question there is, will the Canadians wait for us?

Canada’s Prime Minister, Stephen Harper, according to his aides, Harper has already put in a call to the ChiComs over the oil. They want to sell it. It was Harper who said to us, (paraphrasing) “Look, you might want to treat your country as a national park and off-limits. We’re not looking at Canada that way and we’re not gonna let you turn Canada into a national park. We’re not gonna let you tell us what we can and can’t do with our own oil.” And Bloomberg had the news: “President Barack ObamaÂ’s decision yesterday to reject a permit for TransCanada Corp.Â’s Keystone XL oil pipeline may prompt Canada to turn to China for oil exports.” I have no doubt. “TransCanada has already paid C$1.9 billion ($1.88 billion) for the Keystone XL project, which could still be completed by 2014.”

Now, interesting also today from the Washington Post, one of my favorite economic columnists (sometimes), a guy by the name of Robert Samuelson. You’ve heard me mention his name. “Rejecting the Keystone Pipeline is an Act of Insanity,” he writes. “President Obama’s rejection of the Keystone XL pipeline from Canada to the Gulf of Mexico is an act of national insanity.” That’s the lede. “It isn’t often that a president makes a decision that has no redeeming virtues and — beyond the symbolism — won’t even advance the goals of the groups that demanded it. All it tells us is that Obama is so obsessed with his reelection that, through some sort of political calculus, he believes that placating his environmental supporters will improve his chances.

“Aside from the political and public relations victory, environmentalists won’t get much. Stopping the pipeline won’t halt the development of tar sands, to which the Canadian government is committed; therefore, there will be little effect on global-warming emissions,” blah, blah, blah, “Indeed, Obama’s decision might add to them. If Canada builds a pipeline from Alberta to the Pacific for export to [the ChiComs], moving all that oil across the ocean by tanker will create extra emissions,” far more than pipeline-ing it to the Gulf of Mexico; and, by the way, every time you load a tanker and put it on the high seas, you have the chance for spills. 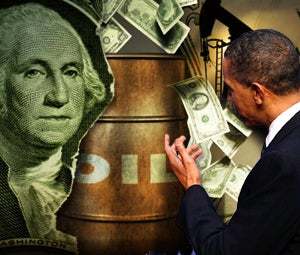 Of course the environmentalist wackos say, “Well, you also have the pipeline could rupture, too. So we shouldn’t do it at all.” T. Boone Pickens was on CNBC yesterday, and he said we are complete fools for canceling the pipeline. (interruption) Well, that’s true. Obama’s the complete fool. That’s true. What is this “we” business? Exactly right. Now, here’s Samuelson: “[C]onsider how Obama’s decision hurts the United States. For starters, it insults and antagonizes a strong ally; getting future Canadian cooperation on other issues will be harder. Next, it threatens a large source of relatively secure oil that, combined with new discoveries in the United States, could reduce … our dependence on insecure foreign oil.

“Finally, Obama’s decision forgoes all the project’s jobs. There’s some dispute over the magnitude. Project sponsor TransCanada claims 20,000, split between construction (13,000) and manufacturing (7,000) of everything from pumps to control equipment. Apparently, this refers to ‘job years,’ meaning one job for one year.” He says, “The big winners are the Chinese. They must be celebrating their good fortune and wondering how the crazy Americans could repudiate such a huge supply of nearby energy.” They’ve gotta be scratching their heads and rubbing their hands together in glee; and I wonder how many people understand that union jobs are required? A portion of the jobs are required to be union jobs in the Keystone deal.

I wonder how many union supporters of Obama understand that. I would bet not very many. So here we have… You can analyze this Republican debate all you want. I’ve been trying all week, ladies and gentlemen, to keep the focus where it should be focused. We have a failed and dangerous president. We have an angry, radical, left-wing crony capitalist with a huge chip on his shoulder. He is so transparent that only dyed-in-the-wool statists pretend to ignore the facts with Obama. He was a terrible senator; he’s a terrible president. Newt had it right last night. The State-Controlled Media has protected Obama. They continue to protect Obama. It’s gone on for too long. But how insane is it? How different is it? How much bigger a boondoggle is this than Obama’s stimulus package?

The trillion-dollar slush fund, non-stimulus bill? Jamming an unconstitutional Obamacare bill down our throats? Then we got all these czars in the White House that are not confirmed so they’re not accountable. He’s taken over the automobile companies, bowed down to despots, treats our allies as enemies, makes unconstitutional recess appointments. It’s really just lawless behavior, ignoring the Constitution altogether. A moratorium on Gulf oil drilling. Ninety rounds of golf, parties, vacations. We’re looking at an abject failure with a chip on his shoulder that the media has coddled and babied and paved the way for; and now it’s coming from across the spectrum how insane, how stupid, how dangerous, how damaging this decision is on the Keystone pipeline.