RUSH: There are some other examples. Let’s go back, this is February 23rd, 1980, Nashua, New Hampshire, before a debate, this is the Reagan “I paid for this microphone.” The crowd loved this, too. I got two bites coming up, the Reagan bite and one with George H. W. Bush with Dan Rather. And my point is there are multiple interests on our side taking it to the media, humiliating the media — and it’s not stopped the media, it’s not changed the media, which is my only point in the first hour. Here’s that famous Reagan moment.

REAGAN: Is this on?

BREEN: Will you turn that microphone off, please?

REAGAN: I am paying for this microphone! (cheers and applause)

RUSH: That happened in 1980 before a debate. That’s February 23rd, Nashua, New Hampshire. Mr. Breen is John Breen, the executive editor of the Nashua Telegraph. “Mr. Breen, I paid for this microphone.” The moderator wanted Reagan’s mic shut off ’cause he wouldn’t shut up.

RATHER: I don’t want to be argumentative, Mr. Vice President.

BUSH 41: This is not a great night, because I want to talk about why I want to be president, why those 41 percent of the people are supporting me. And I don’t think it’s fair to judge a whole career —

RATHER: And Mr. Vice President, if these questions are —

BUSH 41: — itÂ’s not fair to judge my whole career by a rehash on Iran. How would you like it if I judged your career by those seven minutes when you walked off the set in New York? 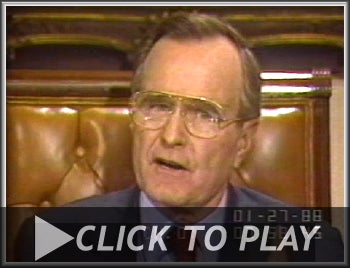 RUSH: Oh, folks, now, you may have forgotten that. Let me remind you, US Open tennis had gone long on a Sunday. There was some reason that “Blather” was gonna anchor the weekend news. And it might have been a Monday, I forget, but the tennis ran long and Blather got ticked off that his news was being preempted by a stupid sports event, because sports is for Neanderthals. And so he walked off the set. At the time the news was to start, he just walked off the set in a mini-protest. And it made news and they found him and they brought him back to the set and he finally did the news when the tennis thing ended.

Roger Ailes was George H. W. Bush’s campaign adviser, and they cooked up, if Rather would not leave H. W. Bush alone about Iran-Contra, they were trying to pin him to Iran-Contra, he knew about it, he was in charge of orchestrating it, and that disqualified him from being president — remember, this is the ’88 presidential campaign. They came up with the idea, let’s just throw it back at him, “Hey, Dan, how would you like your whole career to be judged by when you walked off that set?” I am here to tell you, I started my TV show in 1992, and we taped that show right across the street from the CBS broadcast center where the evening news was, and they were still ticked because Ailes was the executive producer. When people at CBS found out Ailes was across the street, they thought about bombing the building. It was four years later and they were still burning over this.

My mother loved Dan Rather. My mother came to town to visit the TV show, and Dan Rather’s assistant came over and took my mother and introduced her and got pictures of her on the CBS Evening News set, and Dan Rather spent time with her. She loved Dan Rather, and Dan Rather was nice as he could be to my mother. They formed a little friendship. I’d go home to visit my mother and there were Dan Rather pictures on the refrigerator. She wouldn’t hear of any criticism of Dan Rather. He was a new best bud. In the process, you know, I’d meet Dan Rather and I would thank him for this and he said, “I just want to tell you, I like Roger Ailes. I have nothing against Roger Ailes, but when that happened…” It was a defining moment. Nobody had ever said anything like that. “Well, Dan, how would you like to be judged the time you walked off the set?” All it does is make ’em hate you more. (laughing) So Newt Gingrich is gonna be in John King’s crosshairs for the rest of their careers, even though both benefited from it. You might think King didn’t, but believe me, don’t doubt me, he did.