ROMNEY: I’d like to talk about something else that President Obama has been doing. He’s been practicing crony capitalism, and if you want to get America going again —

ROMNEY: — you’ve got to stop the spread of crony capitalism. He gives General Motors to the UAW. He takes $500 million and sticks it into Solyndra. He stacks the labor stooges on the NLRB so they can say “no” to Boeing and take care of their friends in the labor movement.

ROMNEY: This president is the biggest impediment to job growth in this country — 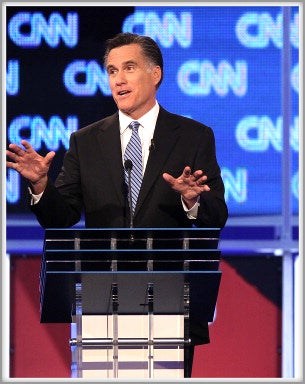 ROMNEY: — and we have to replace Barack Obama to get America working again.

ROMNEY: We started a number of businesses. Four in particular created 120,000 jobs as of today. We started them years ago. They’ve grown — grown well beyond the time I was there — to 120,000 people that have been employed by those enterprises. There are others we’ve been with, some of which have lost jobs. People have evaluated that since, well… (chuckles) since I ran four years ago, when I ran for governor, and those who have been documented to have lost jobs lost about 10,000 jobs. So 120,000 less ten means that we created something over a hundred thousand jobs.

“No, no, no. You got from zero to a hundred thousand jobs. How did you do get there?”

That’s the math that John King wanted and didn’t get. But Romney, this is the answer I think that most people who liked Romney’s performance last night liked in which he finally came out and said, “There’s nothing wrong with profit.”

ROMNEY: There’s nothing wrong with profit, by the way. That profit…

ROMNEY: That profit went to pension funds, to charities. It went to a wide array of institutions. A lot of people benefited from that — and, by the way, as enterprises become more profitable, they can hire more people. I’m someone who believes in free enterprise. I think Adam Smith was right, and I’m gonna stand and defend capitalism across this country throughout this campaign. I know we’re gonna hit it hard for President Obama, but we’re gonna stuff it down his throat and point out it is capitalism and freedom that makes America strong.

RUSH: You do not hear too many Republican candidates defending profit. They run away from it. Consultants say, “Don’t even go there! Don’t tried to justify profit. You can’t do it. Don’t. Don’t sing the praise of capitalism.” He threw it all away and just went for it. It was that answer that, I think, the Romney fans focused on as the reason he finally came alive and finally had a debate worthy of his stature last night.