RUSH: David Brooks of the New York Times, this is from last Thursday. The University of Chicago, Institute of Politics, had a panel discussion about the presidential campaign. George Stephanopoulos left Washington to go to Chicago to moderate. He asked Brooks, “In your most recent column, you state that you agree with the sentiment that America’s gotta go back and discover what we had while also lamenting how it makes for an incredibly backward looking campaign. So we gotta go get what we had but that’s looking backward. What would a successful resolution of this looking backward campaign look like?” 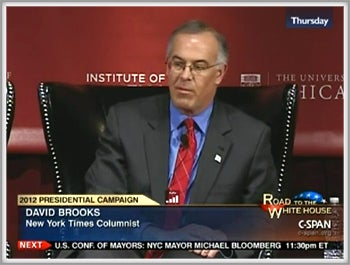 BROOKS: I do not think that the — the country has lost something. There’s been a growth in self-esteem, and this I think has a lot of real world consequences. Uh, one, if you think you’re incredibly special you spend a lot of money on yourself, as befits your station — and if you look at personal consumption, personal debt as a percent of GDP was 43% for about 70 years; and then it shot up to 133%. And if you look at polarization, if you have a sense of modesty about yourself, you realize you need the people who disagree with you because of your own flawed understanding.

BROOKS: Yeah. But if you think you have the truth by the — the short hairs, they’re just in the way. And so it’s no accident that Rush Limbaugh’s two schticks are self-grandiosity and partisanship.

RUSH: I am ruining the country. What a tortured path to get to get me into this answer. The question is about, how do you win a campaign of the future saying we gotta reclaim the past? That was the question. So he goes on to describe the country as a lot of self-esteem out there, and a lot of debt out there, a lot of polarization, a lot of confidence — braggadocio, if you will — and polarization. “It’s no accident that Limbaugh’s two schticks,” my plot, I plotted my two schticks, “are self-grandiosity and partisanship.” I’m not a real guy. I just calculated what works in a marketing sense, according to David Brooks, and, in the process, I’m ruining America. (interruption)