RUSH: Okay, Lake of the Ozarks in Missouri. This is Kirk. Great to have you on the program, sir. Hi.

CALLER: Greetings from the Lake of the Ozarks, America’s conservative Midwest coast.

CALLER: We too are battling with your own federal government land grab but that’s not why I called. 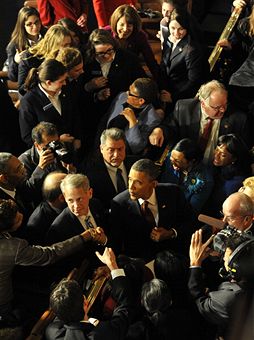 CALLER: My comment and question is I noticed at the end of the speech — finally, thank goodness — that he looked like when was leaving and glad-handing a bunch of people and watching all those pathetic people give him praise, he looked like he was wanting to get out of there fairly quickly, and my question was: When were all the people that were coming up to him toward the end handing him all these documents that he’s signing? What is that all about?

RUSH: He’s the president! They want his autograph. “The president” was in. Not so much Obama. “The president” was there. They want autographs for their offices, for eBay. You never know. They may lose everything when they go to jail in the future, and that autograph might be worth something, any number of possibilities. What I noticed about it last night — and I’ve never seen until last night — is he got lost going out. He went down the wrong aisle and he was looking around asking (impression), “Where’s my detail? Uh, what’s the way outta here? Where am I going? How…? How do I get outta here?” He went up one of the other aisles. He didn’t leave the aisle that he came down. Maybe that was on purpose to give a different group of people a chance to get autograph. There are members of Congress like that woman, Sheila Jackson Lee. She shows up ten hours early to get her seat on the aisle so that she will be seen in the camera shot as the president walks down the aisle arriving. They go in there and they stake out their seats. They’re groupies, especially the Democrat side of it all.