RUSH: Jacob in Atlanta, as we go back to the phones and Open Line Friday. Hello.

CALLER: Yes, sir. I’m actually an independent voter and I’m an Army veteran, and I have a two-part question for you about Congressman Paul.

CALLER: One being, he’s currently polling five points, eight points behind Obama in the general election while Newt Gingrich is polling 11 points, seven points behind him in the general election. That’s a Real Clear Politics average. And the second part: Do you feel that he’s failing to energize the Republican base due to his radical policy changes such as ending income tax, ending Obamacare, and abolishing the IRS? Also, I wanted to say hello to my dad in Las Vegas, Nevada, Chip. 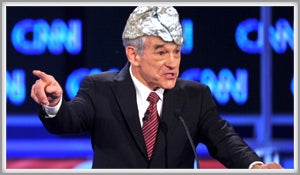 RUSH: No, I think the problem with Ron Paul that most people have on the Republican side is his foreign policy. There’s no reason for us to do anything in the world. In fact, we’re responsible for all the terrorism, we are responsible for all the bad guys shooting at us because (impression), “We’re shooting theeeeem. We’re going to waaaaar all over the woooorld! We’re making waaaaar! What would yoooou doooo?” if they did what we did. So a lot of people have a big problem with thinking that the United States is responsible for the incident on 9/11.

RUSH: That’s probably the number one problem people have with Ron Paul.

RUSH: Were you aware of that?

CALLER: Well, I am, but a lot of my friends who are also independent voters, you can obviously see in the polling for Ron Paul that it just definitely helped him a lot.

RUSH: Let me ask you this question. Can I ask you a question as an independent voter?

RUSH: When Republican candidates are highly critical of Obama, what is your reaction to that, as “an independent voter”?

CALLER: Uh, there are certain things that I disagree with President Obama on. As far as his funding for veterans and Veterans Affairs and everything of that nature, I strongly support that. However, you know, I do feel that we need to get back to a balanced budget and (garbled).

RUSH: Right. But when a Republican candidate goes after Obama as incompetent or says he’s a socialist or the guy is ruining the economy, what is your reaction as an independent?

CALLER: At times, early in his presidential years it was a lot of different. I wanted to essentially give him a shot at the presidency. However now, with the lack of everything that’s been done in Washington over the last three or four years —

RUSH: What is the challenge in answering this question?

CALLER: The challenge is (garbled).

RUSH: I’m not asking you about policy. I’m asking: What is your reaction to a Republican when they criticize Obama?

RUSH: All right. What is Ron Paul…? He wants to legalize most drugs, says the government’s got no business denying people that kind of freedom. Do you agree with that?

CALLER: Um, not necessarily to a certain extent. I know that there’s a lot of… As far as marijuana legalization, it’s a waste of taxpayer dollars for such a petty crime in my opinion.

RUSH: What, what, trying to shut it down?

CALLER: The battle on marijuana.

RUSH: Oh, the battle on marijuana. I saw a story, by the way. There’s some Swiss, Swedish, French, some outfit that has made a marijuana spray for multiple sclerosis. It’s been approved in some European countries. They’re gonna ask the FDA to approve it here. They hope to get it proved by 2013 or 2014, and it’s got THC and the cannabinoid, cannabis, whatever the ingredient is, but it doesn’t give you the high. You spray it in your mouth like a breath spray, and it’s supposed to have all the wonderful medical benefits of marijuana without the high, and it’s primarily being used to treat multiple sclerosis in the European countries where it’s been approved. I wonder. We’ll see. By the way, it also does not — from what I understand, what I read, it does not — enhance the appetite, which marijuana does. So it would be interesting to see if the medical marijuana gang in this country would support an oral spray of marijuana that doesn’t give you a high, does not increase your appetite, but effectively deals with a medical problem. That would be fascinating. Jacob, thanks for the call.