Soros: Not Much Difference Between Romney and Obama

RUSH: There’s a piece here, RawStory.com. It’s one of those blogs out there, and I’m gonna tell you what it says. I don’t know if it’s true. I don’t know who Raw Story is.

“Billionaire investor and philanthropist George Soros told Reuters Global Editor-at-Large Chrystia Freeland that he still supported President Barack Obama, but predicted voters would not be very enthusiastic about the 2012 elections if former Massachusetts Gov. Mitt Romney was nominated by Republicans. ‘Well, look, either youÂ’ll have an extremist conservative, be it Gingrich or Santorum, in which case I think it will make a big difference which of the two comes in,’ he said. ‘If itÂ’s between Obama and Romney, there isnÂ’t all that much difference except for the crowd that they bring with them.'” And maybe better food. Probably better food on the Romney side. 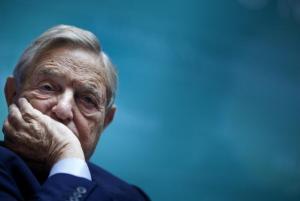 Soros “acknowledged that a major difference between Romney and Obama would be their Supreme Court nominations,” but other than that, there’s no difference in these two guys other than the people they hang out with. George Soros. Now, why would Soros, if he did, why would he say this? (interruption) Yeah, yeah, well, what’s the psychological game that he’s playing? He’s endorsing Romney. “Romney, that’s cool, no difference, I could go either way that way.” Now, Soros knows that he’s hated by the Republican base. So if he’s playing psychology, he’s trying to “shtup” Romney, if you will.

RUSH: George Soros did say it. This is Wednesday on Reuters’ website, Reuters.com. The Freeland File, digital editor Chrystia Freeland interviewing George Soros. This was in Davos.

SOROS: If itÂ’s between Obama and Romney, there isn’t all that much difference, except for the crowd that they bring with them. Romney would have to take Gingrich or Santorum as a Vice President and you probably have some pretty extreme candidates for the Supreme Court. So that’s the down side. On the other side, uh, the Obama administration is a bit exhausted, so it’s not all that strong. So it won’t be that great a difference and I think there won’t be a great deal of enthusiasm on either side of the battleground. It will be more civilized than the previous elections have been.

RUSH: That’s George Soros who thinks if it’s Romney, it’s gonna be a boring election. Nobody’s gonna be enthused on either side. The Obama side’s exhausted, tired, worn out. His supporters down in the dumps. Nothing’s happening like it was supposed to. Romney doesn’t excite the Republicans. (impression) “Eh, it’ll be pretty civilized. Der won’t bee a great deal of enthuz’asm.” Does this guy sound like a Bond villain or what? But he said it here. “If it’s between Obama and Romney, there isn’t all z’at much difference except for zee crowd that they bring vit them.” George Soros. Who, by the way, has a big stake in this stuff as we all know.