Was Elliott Abrams Deceived on Newt?

RUSH: I mentioned his name yesterday — Jeffrey Lord was in the political office of the White House during the first term of Reagan, maybe both terms. Jeffrey Lord now writes at the American Spectator. Jeffrey Lord, like me, didn’t understand all this stuff at Newt yesterday.

AP has a story referring to me now as “conservative radio titan.” And they describe me as trying to defend Newt on this yesterday, and in the process, nevertheless, recounting all of the things that Newt had said. I wasn’t trying to defend Newt, as AP said. All I was saying was I pay close attention to this stuff. Even when I wasn’t doing a talk show, this stuff was my life. The last two to three years I was working with the Kansas City Royals (that would have been ’81, ’82, ’83, I got back into radio in 1984) I was immersed in this stuff. And Newt, the only thing I knew about him was that he was the premiere — there were a lot of people trying — but he was the premiere Reagan defender in
those special orders. And I just had never heard any of this stuff.

Jeffrey Lord, who worked in the White House at the time, had not heard any of this stuff. So he did some research and has written a piece that is now in the American Spectator, The Spectacle blog. I just got it. It prints out six pages, and I have not had a chance to read the whole thing, but it seems like Elliott Abrams has been had. It seems like Elliott Abrams had a piece at National Review really ripping into Newt, was spoon-fed some out-of-context stuff. “Abrams quotes Newt for saying in this speech that Reagan’s policies towards the Soviets are ‘inadequate and will ultimately fail.'” He quotes Newt as saying that. So Jeffrey Lord went to the special order, Newt’s speech on the floor of the House when the House had shut down business for the day and listened to the whole thing. It was an hour.

And Jeffrey Lord writes, “Abrams quotes Newt for saying in this speech that Reagan’s policies towards the Soviets are ‘inadequate and will ultimately fail.’ This is shameful. Why? Here’s what Newt said — in full and in context: ‘”The fact is that George Will, Charles Krauthammer, Irving Kristol, and Jeane Kirkpatrick are right in pointing out the enormous gap between President Reagan’s strong rhetoric, which is adequate, and his administration’s weak policies, which are inadequate and will ultimately fail.”‘ In other words, Newt was picking up on a concern, prominent in the day and voiced by no less than Reagan’s then ex-UN Ambassador Kirkpatrick.” It was a concern that had also been voiced by Reagan supporters, George Will and Irving Kristol, Bill Kristol’s dad, and the late-Mondale aide turned conservative, as Mr. Lord writes here, Charles Krauthammer.

“Reagan’s anti-Communist policies could be stronger if better institutionalized and not tied as much to the Reagan persona.” Newt was picking up on a concern that these members of the Reagan support team and administration had said. He’s a quoted as saying it. He didn’t say it. It’s a classic take a paragraph or a sentence in quotes and take some of the words out of it but leave the quote marks to make it look like the Speaker — in this case, Newt — was saying these things when he was picking up on a concern.

“ABC News. Now here’s a little juicy tidbit. What’s been the big news with Newt’s campaign in the last week? That’s right. The ABC News ‘investigative’ piece by Brian Ross in the form of an interview with Gingrich’s ex-wife Marianne. Aired two days before the South Carolina primary, the incident famously backfired as Gingrich launched an attack on ABC during that now-famous CNN debate hosted by John King. All new, right? Wrong.

“Five days previous to Gingrich’s speech, President Reagan had addressed the nation on what he called ‘the mounting danger in Central America’ from Nicaragua. Nicaragua, which Reagan described as ‘a Soviet ally on the American mainland only 2 hours’ flying time from our own borders. With over a billion dollars in Soviet-bloc aid, the Communist government of Nicaragua has launched a campaign to subvert and topple its democratic neighbors.’ Typically, the liberal media of the day zapped Reagan. And sure enough, buried in that March 21, 1986, Gingrich speech on the House floor, Gingrich was tough on the liberal media’s handling of Reagan’s speech. 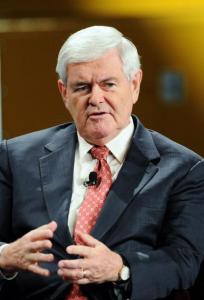 “And who — quite specifically — did he single out for criticism? You guessed it: ABC News. Said Newt: ‘All too often the news media itself is grotesquely uncritical and grotesquely willing to use Soviet language to explain Soviet behavior. Possibly it reached its epitome when ABC News put on a paid Soviet propagandist following the President of the United States.’ In other words, 26 years ago Newt Gingrich was busy incurring the institutional wrath not just of the mainstream media in general but ABC News quite specifically over the issue of their ‘grotesquely uncritical’ treatment of the Soviet dictatorship.

“What America is seeing in real time today in this 2012 presidential campaign in terms of Newt Gingrich taking on both the media in general and ABC News in particular is decidedly not new. There is a history here — a long one — of Gingrich calling out ABC. And, as seen in the now infamous ex-wife interview, ABC pulls no punches when dealing with Newt Gingrich.” Anyway, this, as I say, prints out to five pages. The first half of this piece is the most meaningful. It’s all good, but it illustrates here. The headline of the story is: “Elliott Abrams Caught Misleading on Newt,” and you have to understand: Elliott Abrams’ reputation is beyond repute. He’s gold. He’s the coin of the realm, and that’s what made people curious.

So Jeffrey Lord got together with some people, and found out that it appears that Mr. Abrams been spoon-fed some stuff that he didn’t question because there is an institutional dislike for Newt amongst the conservative establishment and so on and so forth. In fact, here’s how Mr. Lord writes about it: “A piece like the one Abrams wrote depends for its success in garnering headlines — which it did — by assuming no one will bother to get into the weeds and do the homework. Usually a safe assumption when dealing with the mainstream media, particularly a mainstream media that, as one with Establishment Republicans, hates Newt Gingrich. Not so fast.

“Due to the diligence of one Chris Scheve of a group called Aqua Terra Strategies in Washington, Mr. Abrams has been caught red-handed in lending himself to this attempted Romney hit job. Mr. Scheve, you see, is himself a former foreign policy aide to none other than Speaker Newt Gingrich in his days as Speaker. While now out on his own and not working for Gingrich, Scheve is considerably conversant with the Gingrich foreign policy record. Uh-oh. That’s right. Mr. Scheve, incensed at what he felt was a deliberate misrepresentation of his old boss by Abrams and the Romney forces, specifically of Gingrich’s long ago March 21, 1986, ‘Special Order’ speech on the floor of the House, and aware ‘that most of his [Abrams’] comments had to have been selectively taken from the special order’ — Scheve started digging.

“Since the Congressional Record for 1986 was difficult to obtain electronically, Scheve trekked to the George Mason Library to physically track down the March 21, 1986 edition of the Congressional Record. Locating it, copying and scanning, he was kind enough to send to me,” writes Jeffrey Lord. “So now I’ve read the Gingrich speech that is the source of all the hoopla. All seven, fine print pages worth of it exactly as it appeared in its original form. I can only say that what Elliott Abrams wrote in NRO [National Review] about Newt Gingrich based on this long ago speech is not worthy of Elliott Abrams. Specifically, Abrams implies that Newt Gingrich was spewing mindless vitriol about Reagan on the House floor.

“Not only not so, it was quite to the contrary,” which, I’m telling you… These special orders is where everybody first heard about Newt, and he was the premiere defender of Reagan. That’s why all this stuff yesterday had me scratching my head. Here’s a quote from Newt on this special order: “‘Let me be clear: I have the greatest respect for President Reagan. I think he personally understands the threat of communism.’ Gingrich then goes on — at Newtonian length — praising Reagan for Reagan’s understanding of Lenin, Reagan’s understanding of the real ‘purposes of a Soviet dictatorship’ and much more.

“He lists and applauds Reagan repeatedly for the President’s appreciation of ‘the threat in a more powerful Soviet empire’ and the threats posed by Communist Cuba and Nicaragua. He ranks Reagan with the great Cold War presidents in protecting freedom. In short, time after time after, Newt Gingrich — true to form — is there on the floor of the House relentlessly praising and crediting Ronald Reagan. Is it any wonder that years later Nancy Reagan would speak so publicly and warmly about ‘Ronnie’ passing the conservative torch to Newt? Is there any wonder that Michael Reagan has stepped into the middle of this current brawl to endorse Newt?

“Abrams quotes Newt for saying in this speech that Reagan’s policies towards the Soviets are ‘inadequate and will ultimately fail,'” and this is the paragraph I read to you at first that references Jeane Kirkpatrick, George Will, and Charles Krauthammer that Newt references without his words. “In other words, Newt was picking up on a concern, prominent in the day and voiced by no less than Reagan’s then ex-UN Ambassador Kirkpatrick, not to mention prominent Reagan supporters Will and Kristol and the late-Mondale aide turned conservative Krauthammer, that Reagan’s anti-Communist policies could be stronger if better institutionalized and not tied as much to the Reagan persona.

“The entire [Newt] speech focused on suggestions of how to do just that — to effectively institutionalize Reagan’s conservative beliefs in the government. Is Abrams seriously accusing Jeane Kirkpatrick and George Will of being anti-Reagan? Of spewing ‘insulting rhetoric’ at a president everyone in Washington knew they staunchly supported? Really? Of course not. But … Newt Gingrich appear to be doing just that, Abrams apparently quite deliberately cut out the original Gingrich reference to Will, Kirkpatrick, Krauthammer, and Kristol.” Now, I’ve got the whole piece. Jeffrey sent me the whole text of the special order. It is tough slogging, but it confirms my memory.

All I could tell you yesterday is I did not remember any of this Newt-bashing-of-Reagan stuff. But there were the videos of some examples selectively edited. You know, things left out and starting point of the edited version, not really the starting point. So there you have it. But, however, folks, I’m just gonna have to assume here that Elliott Abrams was spoon-fed this stuff by the Romney people. This is a stunning piece. This is an absolutely stunning piece by Jeffrey Lord in the American Spectator. But the genie’s out of the bottle. You can’t put all this back in the bottle now — and the debate last night, that wasn’t Newt’s. Santorum was the big winner to me. Romney did better than in a couple of areas. So that’s that.