RUSH: Now, the Palm Beach County Lincoln Day Dinner was in West Palm Beach on Saturday and Newt was here for that and so was Allen West. If this doesn’t change, do you know what the Florida legislature is doing? They are writing Allen West’s district out of existence. I get e-mails from people, “Look at what Romney’s doing.” I got e-mails over weekend from people, I must have had 15 e-mails, “If Romney’s behind this…” And he may well be. The Republican establishment could well be. He’s a Tea Partier, and he got to Washington and he didn’t toe the line and he didn’t shut up and he didn’t go to the end of the line and he didn’t do what he was ordered to do.

He continued to speak out, said the same things that got him elected. He’s a great guy, military veteran, Allen West, and they’re trying to write his district out of existence. Florida Republicans are trying to — in redistricting, write it so that Allen West has no district — and the Republican establishment, whether it includes Romney or not, is behind it. Well, it’s amazing. The all-out assault on conservatives in the Republican Party is what is the story of this primary campaign. I want you to listen to a little of what Allen West said in his remarks at the Palm Beach County Lincoln Day Dinner Saturday night here. 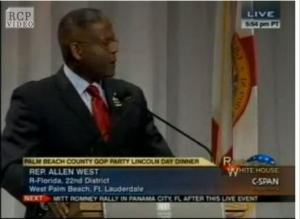 RUSH: Right on! And the thunderous applause went on and on and on. That’s Allen West, who, again, Republicans in the state of Florida are trying eliminate his district.

RUSH: After last Thursday’s Republican debate, in the spin room, one of Romney’s guys was Florida Representative Will Weatherford. And during the course of his remarks he’s trying to spin for Romney after the debate, it’s reported that he shed a very dim light on the ongoing redistricting process in the Florida legislature.

“WestÂ’s congressional district inexplicably sheds the most out support as compared to all other incumbent Republican and Democrat Congressman. A few weeks back we quoted an unnamed legislator saying that, ‘Allen West was screwed’, a statement which was originally made about made five months before the purposed maps were made public, leading insiders to believe that the fix was in against Allen West. But in light of WeatherfordÂ’s comment, it is increasingly clear that this is a fait accompli.” It is going to happen. Weatherford is a Romney guy, and this is why people think that Romney’s behind this. And many people do.

“According to Weatherford, those preliminary maps will not change — at the most, any additional changes would be minimal, and those changes would not make any appreciable difference from the preliminary maps,” the ones that, again, write out Allen West. “In addition, Weatherford stated that a deal was struck between him, Senate President Mike Haridopolos, and Senator Don Gaetz to finalize these maps and push them through as soon as possible.” And Weatherford, it is said here, tried to hide behind a need to comply with federal law. But, look, Florida’s getting two additional seats. There’s no reason to write anybody out. Florida is getting two additional — because of the 2010 census. There’s no reason to write West out. So there’s obviously a political component to this. And, again, the Romney conspiracy is based on the fact that the guy in charge of redistricting is a former Romney supporter.

The Politico says: “Florida Speaker Designate Will Weatherford has been a surrogate for Mitt Romney in the past.” Probably current supporter as well. And people ask, “Why does Mitt Romney care about congressional districts in Florida?” What it means is, what many have been trying to warn you of for a long, long time. And that is that the establishment Republicans are trying to take the Tea Party out. The establishment Republicans are trying to take the conservatives out. This is another reason why, in the Republican primary, there is such fevered opposition to Romney and people who despise — you just heard the previous caller — who despise the campaign that Romney’s running.

BREAK TRANSCRIPT
RUSH: Now, Will Weatherford, the Romney guy, is saying he’s got no choice, that because of the Voting Rights Act you have to start the redistricting process with where black voters live, and then do the districts that way. It’s federal law. You can’t draw ’em anymore with political considerations or desires, even if you are the governing or the majority party. And he says it’s these two new districts that are causing this, they gotta make room for ’em. I’ve got an audio sound bite coming up, I’ve just sent it up to Cookie, where Weatherford explains this in part. He said, (paraphrasing) “Hey, it’s the Voting Rights Act and federal law, I’ve got no choice. Romney is not behind this.” He doesn’t say that, but that’s the clear implication.