A Romney Girl on Newt’s Weaknesses

CALLER: Thanks, Rush, for taking my call.

CALLER: I just want you to know that even though I was upset with you the last couple of days, I still love you and have been listening since the nineties.

CALLER: But let me get straight to my point. I’m really distraught where the conservative movement has taken us and I can understand why the Republican establishment has such disdain for Newt. I remember back when they announced that Newt had been having an affair, and I remember how betrayed I felt. I remember here he was, the icon of conservatism, and yet he was acting like a liberal. And I really do feel like it took the conservative movement a step back.

CALLER: Yes. I always felt like he was a conservative icon.

RUSH: I’m just trying to keep up here. You’re telling me how you felt when you found out he was having affairs?

CALLER: Right. I felt betrayed by him. I can imagine what the Republicans at that time felt towards him. I mean, here we are the party of family values, and he’s doing what the liberals do so often. So I —

RUSH: It was a bit hypocritical. Yes, he was all over Clinton’s case for essentially doing the same thing. But Newt has said that he wasn’t criticizing Clinton “for the sex.”

CALLER: I realize that, but then you go back. Then you go to today, and he’s trashing capitalism. And that’s a huge thing. That’s a big conservative statement. And so now it seems like to me that we’re saying, “Okay, none of that matters because his rhetoric is so good and he’s such a good debater. So we won’t worry about the capitalism thing,” and that’s just kind of how it’s felt to me like the last few days. We’ve just kind of swept it all under the rug.

RUSH: Well, the same thing is happening with the Romney campaign. Those people are saying, “Well, you know, we’ll forget about Romneycare. It’s not really the same thing. We’ll forget that Romney called himself a moderate. We’ll forget that Romney made it a point of saying in Massachusetts he wasn’t a Reagan conservative.” I mean, supporters of both these guys are having to say, “You know what? We’re gonna ignore that.”

CALLER: Each one of them is flawed.

RUSH: We don’t know why he’d sit on a couch with Pelosi for ANY reason, not to mention global warming.

CALLER: Exactly. And then what about Paul Ryan? I mean, do you believe in…? He’s running on, “Well, we want to get this budget under control.” 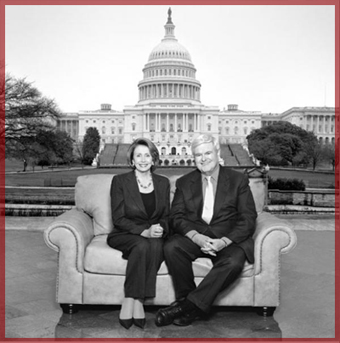 RUSH: Well, let me tell you about that. I can explain the right-wing social engineering comment. I assume that’s what you’re referring to?

RUSH: I’m gonna catch hell for this. You know, I can’t say a thing here without half the people hearing it wishing I was dead. That was just jealousy. Paul Ryan was getting accolades, everybody on our side, ’cause what Ryan’s budget did, effectively the first serious effective plan to deal with all these problems and entitlements, and he was being celebrated all over the place. And a lot of other Republicans were jealous of that. They want those accolades. They think their ideas are just as good and their ideas were ignored. I’m giving you their mindset here. I’m not saying that that’s happened, just what they’re thinking. I think there was just a tinge of jealousy going on there, so he comes out with right-wing social engineering as a means of dismissing it.

CALLER: Well, I can understand that —

RUSH: Not defending it. I’m just trying to explain it to you. I’m not trying to justify it, either.

CALLER: Right. But it just feels like because he’s such a good debater, which he is, and because he can explain conservatism, and he has done a fabulous job, I’m not gonna deny that. But I just think the bigger picture is, you know, capitalism, that’s huge, and to go around and pander to every state and say, “We’ll give you this. We’ll give you the moon,” kind of basically, and all these things —

RUSH: Okay, Mrs. Romney, that’s right, that was one of his debate points in the last debate, that you can’t run around and just tell everybody in every state what they want to hear, that’s not what presidents do. And in Newt’s defense, hey, you know, I think it’s important for presidential candidates to come into a state and have the people there know what’s important to them and what’s going on here. I remember that back-and-forth. All right, Claudia, thanks much. I understand. You are a Romney girl, and upset that I’m not. Or upset I’m not a Romney-ite. I understand that. Folks, I’m always the first guy picked to be on a team. Everybody wants me on their team. I understand. (interruption) No, I didn’t admit anything.