RUSH: I looked at the exit poll data, and of course the Drive-Bys love this. I’ll give you a summation of it here: Romney won every significant category but one. Every age-group, Romney won here in Florida. Every religious denomination, Romney won. Every income group, Romney won. Every ethnicity, Romney won. He won an outright majority of women. Newt got 30% fewer votes from women than Romney got. Romney even tied Gingrich with evangelical Christians. Remember the calls we had yesterday on this program? “The evangelicals hate Romney! They’re not gonna vote for a Mormon!” He tied with the Newtster in the evangelical vote. The only sector — the only sector — that Gingrich won was “very conservative” voters. 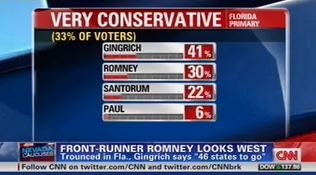 That was gonna keep ’em up late, they said: “The cracker vote” up there in the “Redneck Riviera.” Anyway, when you learn… There’s a guy at the Atlanta Urinal & Constipation by the name of Jim Galloway. The headline of his blog post is all you need to know to explain the exit poll data. “On Florida Television, Newt Gingrich was Outgunned 65 to One.” For every one ad that Newt ran, there were 65 Romney ads. So you can take this exit poll data and you can pretty much toss it. Not totally toss it. I’m not saying totally ignore it. But when you have that big a television ad advantage, it kind of renders all of these sectors less meaningful. Sixty-five Romney ads to every one Gingrich ad. And, of course, last night cable news was still totally immersed in what I did yesterday and how I voted and what that might mean.

Here are the raw numbers on ads and spending in Florida from the Wesleyan Media Project: “Even though Romney has not been on the airwaves as much as he was in 2008, his campaign and its allies have dominated the airwaves in Florida, airing almost 13,000 ads on broadcast television across the state, as of Wednesday, the 25th. Gingrich and his interest-group allies have aired only about 200 spots, with Paul and Santorum out of the broadcast television game.” They didn’t spend any. There were no ads.

So Newt’s got 200 spots that he ran, and Romney, 13,000. That’s a 65-to-one ratio, in terms of the number of ads run. And the dollar equivalent is accordingly gonna be off the charts. So exit poll data is what it is, but that’s a smother. The whole state has been smothered with Romney, Romney, Romney. Every now and then you see a Newt ad. Newt’s so mad, he hasn’t even called Romney to congratulate or to concede. Not even a robo-call, folks. He hasn’t even called at all, not even a computerized call.