Obama and the Super PACs

RUSH: Who’s next? George in Dubuque, Iowa. George, glad you waited. Great to have you on the program, sir. Hi.

CALLER: Hey, dittos, Rush. I just wanted to get your thoughts on the super PAC reversal by Obama.

CALLER: He had opposed it and railed against the Supreme Court ruling. Now he embraces it. Doesn’t that take that issue off the table? 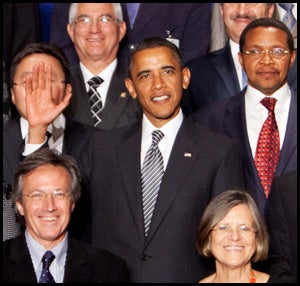 RUSH: No. It’ll never take it off the table. They’ll continue to complain about it and whine and moan. They’ll whine about everybody else’s, not theirs. See, but they’ve already got two built-in super PACs nobody ever talks about: They’ve got the media and labor, Big Labor. They’ve already got the equivalent of maybe more than two super PACs. But no. Look, nothing is gonna stop them being hypocritical.

CALLER: Isn’t Schumer next week gonna have hearings on the whether it’s legal or not?

RUSH: I think the purpose of those hearings that Schumer’s conducting is going to be to pressure Republicans. To pressure them, to frighten them, to let them know that he and other elements of the government are gunning for ’em. What it really is is Chuck-U Schumer trying to intimidate donors into staying out, not getting involved. He’s trying to make it look like they, too, could be investigated. Remember, nobody wants to be investigated by the government ’cause you can’t compete with them. You don’t have the money. Plus the game is rigged. You’re always gonna lose. People think the simplest solution is: Don’t get involved. And that is the express purpose behind what’s going on with Schumer. It’s typical. It’s intimidation. But the regime, you might say they’re being hypocritical. But they’ll never admit it. I think the thing to note about this is the fact that Obama’s gonna go super PACs. Why? I thought Obama was this big million-dollar campaign baby? I thought he had all kinds of money to campaign!

RUSH: Here’s Obama. I just want to go back. We were talking about Obama changing his mind on super PACs. This is Obama October 22nd, 2010, he’s in Los Angeles.

OBAMA: Millions into phony front groups. You’ve seen ’em. They’re called Americans for Prosperity. They don’t have the guts to say we’re funding this, so they hide behind these front groups. You don’t know who these groups are. You don’t know who’s funding it. They can spend without limit, keep their contributions secret. These rulings are not just a threat to Democrats. They’re a threat to our democracy.

RUSH: Right. Now Obama is, to hell with that, I’m gonna do super PACs now. It’s ’cause they don’t have this billion dollars. They don’t have nearly the amount of campaign dollars they’ve wanted everybody to believe. Axelrod this morning on Morning Joe was asked by Scarborough, “Is the president a hypocrite for championing a super PAC now after saying he was opposed to ’em and they were phony and nobody knew who they were and it’s a really bad thing?”

AXELROD: We were faced with the situation as to whether we could afford to play by two sets of rules, and the answer is obviously no. That doesn’t mean that we believe that this is the best way for the system to function. The president’s gonna continue to fight for ways to reform that system in the future, but that’s not gonna happen in this campaign.

AXELROD: And we have to live in the world as it is, not as we want it to be.

RUSH: Yeah. We gotta win. Winning. We have to win, so if it takes super PACs to win then we’ll do super PACs, it’s that simple. We’ll do whatever it takes to win, we’re not being hypocrites. And it’s couched, two sets of rules out there, other sides doing super PACs, we’re gonna do super PACs. Yeah, well, the other side never said they oppose them.