The Constitution is an Impediment to Libs

RUSH: Hey, here’s a shock from the Associated Press just now, breaking news: “Appeals court rules that California’s voter-approved ban on same-sex marriages is unconstitutional.” Voter-approved. People in California — can you say Prop 187? — have voted again, and an appeals court has said, “Ah, ah, ah, ah, you can’t do that, that’s unconstitutional.” Why even bother to have elections in California? Why even bother to go through this process? This is letting the guys in the black robes decide everything.

Grab audio sound bite number 28. Here’s a proud member of this new progressivism, a proud member of the Democrat Party and the American left who think the Constitution here is an obstacle, it’s an impediment. And you know why? Because it doesn’t say what the government can do. The Constitution is a document that empowers citizens. It empowers the individual over the state, and that is despised by people like Obama. That’s despised by most Democrats. It is the state, many doofuses believe an altruistic state, which is to have dominion over citizens. Citizens are a bloc of nameless, faceless robotic parts to be collectively controlled and manipulated and shaped and formed by the altruistic state.

The Constitution has proscriptions against government. The Bill of Rights tells government what it cannot do. Obama and his buddies have a name for this. They say the Constitution is a set, if you will, of negative liberties, negative liberties from the point of view of the government. If you believe government should be all powerful, the Constitution’s your enemy, it’s an impediment. And that’s why Obama, whenever he can, is just ignoring it, such as recess appointments when there are no recesses. Such as telling the Catholic Church and other religious institutions — from the same bunch that runs around and talks about separation of church and state. The only time they care about that is when a religious conservative is about to win office or a religious conservative has a set of values and issues. Then we hear about separation of church and state.

When Obama wants to tell the Catholic Church what it must sell, what it must make available to people, and the things that it must do go counter to every moral underpinning it has, that’s not separation of church and state. No, that’s the church not knowing what’s good for it; that’s the church standing in the way of the state; that’s the church getting in the way of the state doing what it wants to do. And that’s really the root of all this, that obstacle that the Constitution is, is at the root of what Obama’s attempting to do here with the Catholic Church and contraceptives. It must provide abortion education in its schools. It must do these things as part of Obamacare. Obamacare itself, taken as a whole, has as its premise that the Constitution is wrong, that the Constitution’s flawed.

I mentioned this last week. We now have some audio. Justice Ruth Bader Ginsburg of the US Supreme Court was on Egyptian TV. She’d never say this on American TV, by the way. Not yet. But on al-Hayat TV, this is what she said to the Egyptians as they put together a constitution and reorganize their country. 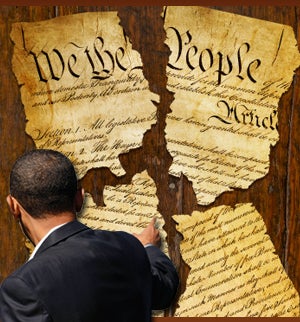 GINSBURG: I would not look to the US Constitution if I were drafting a constitution in the year 2012. I might look at the constitution of South Africa. That was a deliberate attempt to have a fundamental instrument of government that embraced basic human rights, had an independent judiciary. It really is, I think, a great piece of work that was done.

RUSH: Don’t model whatever you’re doing after the US Constitution. Why not? The greatest document in the history of mankind, preceded of course by the Magna Carta. Why not? Why not? Because, ladies and gentlemen, the Constitution is an impediment to people like Ruth Bader Ginsburg. The Constitution tells her what she cannot do, and everybody else in government. The Constitution raises up the individual over the state, enshrines the whole notion of the pursuit of happiness, which you may think that’s just a throwaway phrase. That’s normal, everybody wants to pursue happiness, everybody wants to be happy.

When your founding documents mention that that is one of the fundamental aspects of creation, therefore that’s one of the fundamental aspects of our human spirit, the right to pursue happiness, no government shall impede that or get in its way. It is a major reason why this country has become a superpower in so few years, compared to all the other nations that have been on the earth for thousands of years, all the other civilizations. Yes, it’s freedom, but it’s the definition of that freedom vis-a-vis the state. Right to life, liberty, pursuit of happiness. It is fundamental. There’s Ruth Bader Ginsburg. She’s speaking for the regime. She’s speaking for Obama. Don’t model it after the US Constitution. No, no, no. There’s not enough about human rights, no basic human rights in the US Constitution.

No basic human rights? That’s another term that’s been bastardized and now means something entirely different from what its true definition or meaning is. The US Constitution spells out human rights better than they’ve ever been spelled out before. Ruth Bader Ginsburg was the ACLU’s top lawyer before she became a justice. They despise the US Constitution. It’s a problem. Obama doesn’t like it. And you know what they’re replacing it with? By the way, we have conversations on this program and we have since this program’s founding. This particular program’s founding was August 1st of 1988. And a lot of people think we live in a democracy. We don’t. We live in a representative republic where theoretically the people have a say in what the government does.

A democracy is pure majority rule, and that’s what Obama is attempting to set up, a pure democracy, no representation, no republic, a pure democracy where the majority runs the show regardless. They couch all this in the need for basic human rights and civil rights. But of course when you look at what they do it’s the denial of all of that and the elevation of the state over the individual who, in their perfect world, would cease to exist. The individual would be part of a conglomerate, faceless, practically nameless, just numerical, numbered robots who are plugged into various places by the state as part of their collective, part of the command-and-control that they, and only they, have the intelligence and the understanding to be able to run.

RUSH: By the way, this appeals court decision is a Ninth “Circus” Court of Appeals decision, which says that the California vote on same-sex marriage is unconstitutional. What is “unconstitutional” about it? It was a California ballot initiative. It was approved. It had the right number of signatures. It passed muster. You can’t get these propositions on the ballot until they pass muster! You can’t get ’em on and put ’em up to a vote until they have the right number of certified, authorized signatures. All that was done. The people of California voted to ban same-sex marriage. The Ninth Circus, in a 2-1 decision, found that Proposition 8 — a 2008 ballot measure that limited marriage to one man and one woman — violated the US Constitution. Just like they say abortion is legal and constitutional. It isn’t in there! It was founded and created in 1973 by judges. It’s not in the Constitution. And now same-sex marriage is said to be constitutional. The Ninth Circus says so. This is the kind of assault on the Constitution and on our culture that’s taking place being sponsored by the American left.