The EIB Phone Lines on Fire

RUSH: Ann in Bradford, New Hampshire, as we kick it off. Great to have you on the program, Ann. Hi.

CALLER: Well, good. I just want to let you know that I think you have, obviously, made your decision that you are backing Santorum. And I just want to tell you that he’s a loser, in my opinion. He will lose big time!

CALLER: ‘Cause to me he’s just like Obama. He’s a lawyer, he’s done nothing else, and he’s holier-than-thou in his presentations, I think.

RUSH: All right. Well, you may be right that he’s gonna lose. I haven’t chosen anybody.

CALLER: Oh, it sounds like you have. It’s so obvious.

RUSH: Well, but I haven’t said that.

CALLER: No you haven’t said it, but it’s obvious! Ha!

RUSH: See, you’re drawing inferences from implications I haven’t made.

CALLER: I don’t think so.

CALLER: I think I’m right on the money.

RUSH: (laughing) I’m lying to you now then, right?

RUSH: Let me tell you something. You know, it’s a good thing that you called. You have given me an opportunity here, take the occasion of your call to say something. I haven’t chosen anybody, ’cause I realize I’m a powerful, influential member of the media. Will you agree with that?

RUSH: Okay. When this is all over I have to be in a position to be able to support whoever our nominee is with full credibility. Now, if I make a choice during this race and if I — let’s not say that. Let’s say that I just spend this whole time ripping somebody to shreds and they end up winning it, where am I when I then start talking about how qualified they are and how you ought to vote for ’em?

RUSH: I can’t put myself in that position.

CALLER: I do understand that.

RUSH: And I don’t take any of this personally. This is not personal. I don’t have any personal attachment to Romney or opposition. I don’t have any personal attachment to Santorum or not. I don’t have any personal attachment to any of these people, and I have no personal investment in the outcome, meaning I’m not sitting here telling myself that, okay, I subliminally want people like you to think I’m for Santorum and then when Santorum wins I want to tell myself how powerful I am. That’s not at all the way I look at that. I have no personal investment. My power, credibility, is not on the line here. I’m just sharing with you each and every day when I hear something said by one of these guys that I don’t like, like Romney yesterday, his tax plan, but at the same time when Romney said things I like, I’ve said so.

The bottom line is this, Ann. If you didn’t hear me yesterday, let me repeat it. I want whoever gets this nomination to be the best they can be. When Romney announced his tax plan yesterday and I thought it could have been better, my criticism is rooted in I want him to do it right, or Santorum. That’s why I tried to explain a little bit this morning what his team player comment was all about. I wasn’t making excuses. I was trying to explain with more time than he had what he was trying to tell people. I want all these people to be good, ’cause one of them’s gonna be the nominee.

CALLER: Right. Well, we think maybe one of them.

CALLER: I can’t be sure about that.

CALLER: I know. Well, if I had my druthers, I would pick Christie. 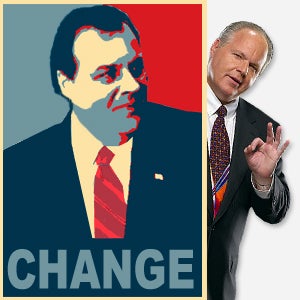 RUSH: Well, by the way, did you hear that Chris Christie called Obama a coward?

CALLER: No, I didn’t hear that.

RUSH: Yeah, this is a blog called TheRightSphere.com talking on Morning Joe today about gay marriage and his recent veto of a New Jersey marriage equality bill, the guy who should be running for president according to this blog found a way to use the issue to attack Obama. It was glorious. “Christie defended his recent veto of a bill allowing gays and lesbians to marry and reiterated his call to put the question to a popular referendum, arguing, ‘the Democrats in my state are criticizing me saying my feet are firmly planted on the wrong side of justice. I said yesterday, yeah, my feet are firmly planted right next to President Obama.’ ‘He could have gotten more votes in New Jersey out of Democrats in the legislature — not all of them voted for it Â– if the President would have taken a stand.'” But that wasn’t the best part. The real fireworks started when Jonathan Capehart pressed Christie on putting civil rights of a minority up for referendum, and Christie was unfazed. He went on to say Obama’s a coward about all of this.

RUSH: And he’s out there saying to Warren Buffett, “Why don’t you shut up, pal, and cut a check.”

RUSH: Well, this is the kind of combativeness that our side likes in Chris Christie and he says that people are beating down his door trying to get him to run, change his mind.

CALLER: Right, well, I appreciate you listening to me.

CALLER: Anyway, that’s how I feel.

CALLER: All right, thank you.

RUSH: Miles in Amherst, Virginia, great to have you on the EIB Network. Hello.

CALLER: Hello, Mr. Limbaugh. Thank you for letting me share your audience.

CALLER: I want to talk about the debate last night, but I don’t think I should let the discussion on abortion pass without notice. Your screener said to get right to it about the debate, but this business about a woman’s body, well, once a child is conceived it’s a second body, and what the Supreme Court did in 1973 was reestablish slavery in making that infant the property of the mother. Now, to get to Romney’s debate performance last night, to the extent that people are cheering about it, it’s triumph of form over substance, because Romney revealed a great many things last night and to me he lost the debate quite badly.

CALLER: Well, he said he saved —

RUSH: Wait a minute. Miles, have you and I ever met?

CALLER: He said he saved the Olympics by taking a bailout from the taxpayer. Romneycare was made possible by a taxpayer bailout and in the debate several times he sang the Obama song, which is, you know, work hard, play by the rules, put your children through school and retire. And he behaved throughout like every spoiled little rich kid I’ve ever met.

RUSH: Well, who do you think won the debate?

CALLER: Well, it isn’t a question of who won and who lost. His performance is dressed up and made to look like he’s coming out tough, he’s firing on all cylinders against Santorum and everybody else is peripheral. Now, as you’ve pointed out, Ron Paul is an adjunct to the Romney campaign. And we have everybody saying — I shouldn’t say everybody — we have a great many people saying that Romney is of presidential timbre. Well, he has a record, and his government record is taking bailouts. His government record is flopping all over the place. People tell him which way the wind is blowing, that’s the way he follows.

RUSH: By the way, I’ve got precious few broadcast seconds left. You know these endorsements that Romney is getting from members of Congress, governors and so forth, do you think their voting records are similar to Santorums?

CALLER: I have no idea in the aggregate or to be specific I should say. In the aggregate, there’s many people that have similar voting records to Santorum.

RUSH: I bet there’s not a whole lot of difference in some of the senatorial congressional endorsements of Romney from Santorum’s voting record and however many of them might have supported Specter. I’m just asking. I don’t know.

RUSH: I just want to warn you, folks. The phones are smoking, literal smoke is pouring out of our phone lines. People think I’m being unfair to Romney, and my e-mail is pretty much the same way. So fasten your seat belts. We’re heading on down the highway.

CALLER: I just wanted to say when earlier you were talking, I wanted to call and say, “You lie,” but that was a little bit too harsh and I wanted to say maybe that you really lie to yourself. You’re holding Romney to a different standard. You explain away any Santorum issues but yet Romney, he did this, he did that, and it just doesn’t hold the same standard.

RUSH: Can you give me some examples of what you mean so I will know?

CALLER: Sure. Of course, Romneycare. People need to understand, and you could say this, but you choose not to, that he had an 80% legislature. He got the best deal he could. Now, you’d say, “Well, he coulda held firm on his convictions,” and then what would he have had? It would have been worse. They wanted worse. They even overrode him on a couple issues and, you know, added things to it beyond that and that’s what people don’t understand. But Santorum, he says something, “Well, I had to go along to get along, I had to do things.” Well, he didn’t hold to his convictions. He didn’t hold to his principles. He went beyond that and sold himself out to some degree. 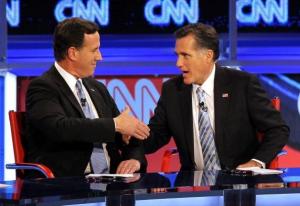 RUSH: And so you think that in my effort to explain what Santorum was trying to say last night, I’m showing preference when I don’t attempt to explain how Romney had to deal with 80% Democrats in the legislature when he was putting together a big government health care bill?

CALLER: That’s basically it. I mean there’s other Santorum examples I don’t have at my fingertips, but you’ve done that throughout. I understand you want the most conservative person, and so do I, but I also want the most conservative person who I think is already Romney, and he can clearly win. Newt, I mean I know you don’t like to hear that, either. Newt has no choice. I remember him, I loved him back when he was up against Clinton and doing what he did, but I said, he had no chance of winning ever.

CALLER: And the same with Santorum. He’s great, he’s a conservative, I don’t have any issues with him, but he can’t win. I think they’re all three conservatives.

RUSH: What is it about Romney that gives you confidence he can win when the other two you don’t think can?

CALLER: Well, he doesn’t spend all his time on the social issues, which, I don’t think Romney’s gonna get in there and do all these terrible things to the country. He’s gonna be held with what the —

RUSH: Wait, social issues terrible — lost you there. Who’s gonna do terrible things to the country?

RUSH: No, but you said Romney’s not gonna get into the social issues and then you —

CALLER: That’s not his driving force. You seem to pooh-pooh the people in the middle, the independents. They’re the people that are wishy-washy. They don’t listen to your show for the most part. They watch the mainstream news, and if you watch it for an hour every night you’d be sick. It’s just terrible. They distort things. They tell half-truths.

RUSH: Yeah, I’ve heard that about the mainstream media. I’ll check it out.