Callers Weigh in on the State of the Race

RUSH: Joyce in Lincoln, Nebraska. You’re next. Welcome to the EIB Network.

CALLER: You remember. So now I’m your radio wife. I’m not gonna rant and rave. I’m really gonna try not to. But I have finally made up my mind who I am for. And I can’t get the words of Sarah Palin out of my head. She said, “Make sure they’re a conservative.” And that just keeps running by and —

CALLER: I’m going for Newt and Cain because they smeared ’em, but before that I want to tell you something. If the Republicans, just for politics, are gonna put somebody in there to win and — or to let Obama win, they are putting the cart before the horse —

RUSH: Well, I know what you’re talking about. Look, she’s reacting to some comments that have been — she’s a new arrival, folks. She hated me up ’til a week ago. Now she’s my wife. She literally hated me. I remember her call. So she’s new to all this, and she heard me say that the Republican base, some of them don’t — or the establishment don’t even think that Obama can be beat, so that’s what she’s reacting to. By the way, that is true.

Now, Vickie from Troy, Ohio, was gonna say, “Well, of course Santorum’s where he is because you’ve been out there supporting him every day.” That’s what she was going to say. Every comment I make, every commentary I offer, every monologue I deliver is for Santorum. That’s what she was gonna say, and she wasn’t happy about it. She was angry about it. When her time came, she was gone. So that’s what her point was and I’m sure that there are many of you out there who feel the same way.

Lindsey, Rochester Hills, Michigan, great to have you on the EIB Network. Hello.

CALLER: Hi, Rush. I’m thrilled to talk to you. I’ve been listening to you for years. I just wanted to piggyback on what you were saying about the comment from Romney. There is a quote, as he was addressing the crowd the other day, in referring to Obama, he said, “He’s out of ideas, and in 2012 he’s going to be out of office.” Well, I got news for you, Romney, he’s not out of ideas. God only knows what he has planned if he gets reelected. And if this is the way he’s going to address the situation, that’s not tough enough to take on Obama.

RUSH: You know, you’re very shrewd. That comment, I heard him say it, and it went in one ear and out the other, and because you’ve cited it to me I know why. That is a stock campaign line that a candidate utters about an opponent, “He’s a out of ideas, and he’s out of time,” or whatever it was, “He’s out of ideas and he’s gonna be out of office.” That’s just campaign 101, he’s out of ideas. And what it means is that Obama’s tried everything and it hasn’t worked, and he’s running away from it and so forth.

But, as you correctly point out, Obama’s nowhere near out of ideas. In fact, truth be told, Obama has barely scratched the surface. Four more years with no accountability. Four more years without having to worry about another election. And, believe me, he won’t care about the 2014 midterms. He won’t care diddly-squat. He’s gonna have four years to remake this country, and he’s already talking to governors about how to do it without Congress.

RUSH: Tempe, Arizona, and this is Mark. Thank you for calling, sir. Great to have you with us.

CALLER: Hi, Rush. It’s nice to talk to you again.

CALLER: You know, I think the Obama camp wants to run against Romney and Romneycare as opposed to Santorum, because Santorum is a true conservative. And if we don’t get a Tea Party turnout during the primaries, we’re going to suffer the consequences. I think that the Democratic operatives have been crossing over — since they have a lock on the Democrat nominee —

RUSH: Wait, wait. What do you mean if we don’t get Tea Party turnout during the primaries?

CALLER: — following your advice and switching parties to vote in our primaries.

RUSH: So you think the Democrat Operation Chaos has been going on long before, Michigan?

CALLER: Yeah, I think so.

RUSH: And you think the Democrats want Romney?

RUSH: Well, then how come he hasn’t won every one of them?

CALLER: (laughing) Because of that turnout.

RUSH: Well, I thought you were complaining it hadn’t been turned out?

RUSH: You think Obama wants to run against Romney ’cause of Romneycare?

RUSH: And you think he doesn’t want to run against Santorum ’cause he’s conservative?

CALLER: Yep. I think that’ll bring out the people from the woodworks. I think that America… I’m just like you. I think America is basically conservative, and they just stay home when they don’t like the candidate.

RUSH: Well, you may be right except I don’t think so yet. I don’t think you’re right yet. I think the White House is salivating over the possibility… We know, and nobody can convince me otherwise — and I don’t care how hard you try. I don’t care how smart you are. Nobody can convince me that they didn’t want Romney from the get-go. That’s why they created Occupy Wall Street. Occupy Wall Street was created to demonize Romney and Romneycare as well. They thought it was a twofer. But I think they’re looking at Santorum. I think they’re salivating. I think that they believe, enough of them believe that if they make these social issues a number one issue in a presidential campaign, that they’re gonna win 80% of the vote. I think they believe it. (interruption) Now, Snerdley’s shaking his head. You think that they really understand how they’re on the minority side on that, but I think they’re salivating over the possibility of a Santorum. They fear his conservatism, too, but I don’t look at him as mainstream. They don’t even think he’s gonna get the nomination.

RUSH: Chris in Pittsburgh, great to have on the EIB Network. Hello, sir.

CALLER: Hello, Rush. This is truly an honor to speak with you.

RUSH: I can understand. Thank you.

CALLER: (chuckles) You have been a great positive influence on my life, more than you’ll probably ever know.

RUSH: Well, I appreciate that. I really do. But you’ve been the same for me. Unknown to you, but you have.

CALLER: Well, I thank you. Just a concern about Santorum from someone who lives here in Pittsburgh and watched him on his last senatorial campaign against Bob Casey. There was a time there he seemed to get a little bit angry. More so, I think it’s more his passion. However, it came across as anger. And, you know, as much as conservatives are seen, these guys as angry anyway. How do you feel about that concern?

RUSH: I know what you’re talking about because I have made a similar observation. When watching Santorum in the debates, I detected what I thought was resentment. I don’t know if you know the personality type. Let me describe the personality type: The guy who thinks that everything everybody else is saying, he’s already said but hasn’t gotten credit for it. A lot of things that people have accomplished, he’s already done but he didn’t get the credit for it. Santorum struck me at times that way. The anger you’re talking about, the facial expressions, the (sighing), the sighs.

I got the impression he resented the fact that nobody knew what he had done. He resented the fact that nobody knew what his accomplishments were. And the facial expressions that accompanied that could be off-putting. Now, I haven’t seen them as frequently in the last two or three debates. But all last year it’s one of the observations that I made, and I wondered about it. I thought, “This is not going to be helpful.” That personality type is not magnetic. Resentment is never attractive, and that’s how I interpreted it. I could have been wrong, but that’s how I interpreted it. You saw it as anger.

Joe in Gettysburg, Pennsylvania. Hello, sir. Great to have you with us on the EIB Network.

CALLER: Rush, what I wanted to say is Newt is my guy because no one other than you, Rush, articulates conservative principles and values better than Newt, for me. And I have to vote my conscience. Now, what I would like to see, Rush, is someone to put together Newt’s greatest hits from the 2012 debates because nobody brought down the house more than Newt did, as you well know. I mean if there was an applause meter at any of those debates — 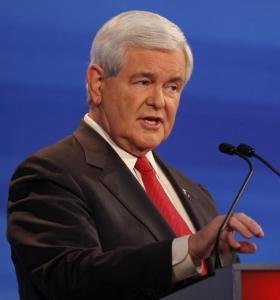 CALLER: — it would have went off the radar with Newt. And the other thing, Rush, is, you know, that whole Catholic Church mandate was about a week or ten days old when it was Newt who reminded us, as you did, that Obama voted for the partial-birth abortion and infanticide. It wasn’t Santorum, and it wasn’t Romney. It was Newt, Rush. And he reminded the whole country of that, so God bless him.

RUSH: Well, let me tell you something. I suggested after the last debate, ’cause there hadn’t been one in a month, I suggested Newt did well, that he could reemerge, and a lot of people had the same thought. Now, Newt has conceded Michigan. He’s not campaigning there. That’s undoubtedly helping Santorum. I think it’s still wide open. I saw somebody — might have been somebody in the Romney camp, I’m not sure — who theorized that this primary battle is gonna go on until at least May. At least May is what some people high up who know these things think could possibly happen here. And depending on what happens in Michigan, that could well be.

So we’re still very early in this in terms of delegate selection, numbers of delegates pledged, and out there lurking in the weeds is the Republican establishment, who NBC reporters say have given up. And then alternately we hear that those same people are planning to take over the convention and see to it that none of these people end up as the nominee because they’re all too damaged. What it all adds up to is that Newt’s not out of it yet. Romney’s not out of it yet. Santorum’s not out of it yet. This is still wide open.