The Politics of the Blunt Amendment

RUSH: Ladies and gentlemen, something else is going on out there today, and I’m gonna get to this in due course, but I wanted to scratch the surface right now. They’re voting in the Senate, or they were shortly before the program started, on something called the Blunt amendment. And just to put this in perspective, before the program started, H.R. got a call from Senator McConnell’s office. Senator McConnell’s office wanted to tell us that a story about this at TheHill.com is wrong when it asserts that McConnell is not interested in repealing Obamacare or wouldn’t take an opportunity to do so should that present itself. 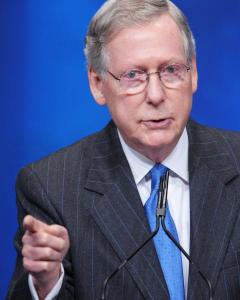 McConnell’s office told us that going after Obamacare needs to have certain stars aligned, both vote-wise and procedurally. And the vote today about religious freedom concerning private health care does not signify a lessened desire to repeal Obamacare. McConnell’s office wanted us to understand what they’re doing today. The Blunt amendment being voted on today, if I could make this as brief an explanation as possible, at the end of the day it’s really ineffective. It will not repeal Obamacare. It will not exempt anybody from the congressional mandate to buy health insurance. It is a public relations effort. It is designed to make it look like that’s what’s going on, but it doesn’t carry the force of anything behind it. I think it’s attached to the highway bill or some such thing. It really is PR for voters. It doesn’t have the teeth in it that I think people would like for us all to believe that it does.

The Blunt amendment failed 51-48, by the way. Erick Erickson at Red State ran one of his siren stories today saying that McConnell had, as one of his objectives, not irritating Senator Reid. Now, I don’t know anything more than that. I haven’t seen it anywhere else, but that’s where Erick posted it, that McConnell didn’t want to do anything to irritate Reid. The problem with this is that it’s an election year, and it also gave Democrats a chance to vote against the mandate when they really don’t mean it. To a lot of people the Blunt amendment was one of these things that doesn’t carry the force of any legislation, really, doesn’t carry the impact of law behind it, but it allows members of the Senate to vote in a way that would have been most helpful to them for their reelection since there’s no change at the end of the day, at the end of the vote. So that essentially is what the controversy is about.