RUSH: For those of you tuning into this program to find out what’s going on, there is a central element of the whole Sandra Fluke story that you are not being told in the mainstream media. We’ve discussed it repeatedly here, but it’s not part of the reporting in the mainstream version of it. But Jay Carney, the White House press secretary, just said that Obama finds the attacks on Fluke to be “reprehensible, disappointing, personal and crude.” So I ask Jay 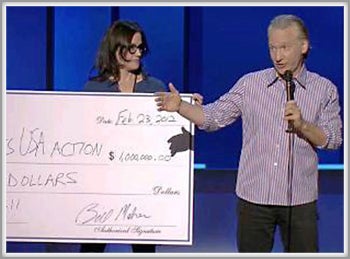 Carney: Will President Obama now give back the $1 million donation that Bill Maher just gave his super PAC? You want to get some tapes of some things that Bill Maher has called Sarah Palin?

The C-word over and over again.

Bill Maher and some of his comments make me look like Romper Room, a choir boy. So will Obama be giving back Bill Maher’s money? Not just Bill Maher. Look at how they have characterized Sarah Palin all of these years. The media included! I know Jay Carney will not be asked. That’s why I’m asking: “Will Obama give back Bill Maher’s money?” (impression) “He can’t, Mr. Limbaugh, because Bill Maher gave the money to the super PAC, and, as you know, Mr. Limbaugh,” this the voice of the New Castrati, “the president has nothing to say whatsoever, Mr. Limbaugh, about the super PAC.”