RUSH: Marion Barry, remember him? Marion Barry, the former mayor of Washington, DC, who… Was he mayor when he was outed in that scandal involving drugs? What was it? I remember at the end of it what Marion Barry said was, “The b-i-itch set me up.” Some woman set him up. They caught him red-handed doing something, breaking the law. Marion Barry has now won election to the DC city council. (interruption) That’s right. He won the primary. He will run unopposed in November. 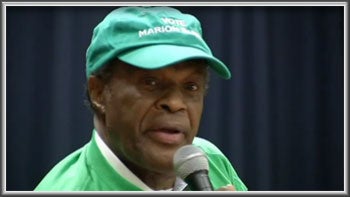 So he’s essentially been reelected to the DC city council. He said, “We’ve got to do something about these Asians coming in and opening up businesses and dirty shops. They ought to go. IÂ’m going to say that right now. But we need African-American businesspeople to be able to take their places, too.Â”

(paraphrasing) “We gotta get rid of these Asians. They’re coming in here and they’re opening up these old dirty shops, and they gotta go.” Marion Barry. Former mayor. And of course he’ll be perfectly free to say this. There will be no criticism. It’s impossible for somebody like Marion Barry to be a racist. Yeah, he was mayor and he said, “The b-i-itch set me up,” in a hotel room. I forget what it was that she did. (interruption) Was it coke? He was supplying coke? I thought it was drug-related. I didn’t remember. So, anyway, now you Asians, you gotta go. City councilman Marion Barry doesn’t want you. He’s a Democrat. Is there any other elected official in Washington? Is there a Republican elected in DC? City government? I don’t know him or her.

Anyway, (paraphrasing Barry) “You Asians, you gotta go. Your shops are ‘dirty,'” — and Marion Barry wants to get rid of you.

RUSH: Moving on regarding Marion Barry, I want you to hear it for yourself. Marion Barry, when he was mayor, he was doing something, like cocaine. It was in a hotel room, and some nice attractive woman had lured him there for an affair or something. And she was, what, an FBI informant or… I don’t know if informant’s the right word, but she was undercover or something or other, snitch, what have you. She was working with the authorities. She was smoking crack cocaine, and she said, “You want some?” He said, “Yeah, yeah.” And the cameras were in there, the hidden cameras, like 60 Minutes, Woodward-Bernstein, and when the cops got in the room, Marion Barry said, “The bitch set me up.”

So now Marion Barry’s back; he’s on the DC city council. He doesn’t like the fact that there’s a bunch of Asian small businesses in town. And after winning his election in the primary (he’s unopposed so he’s gonna be serving his third term) for Ward 8 city councilman, former four-term mayor of Washington, Marion Barry spoke to supporters.

BARRY: We gotta do something about these, uh, Asians coming in, openin’ up businesses, these dirty shops. They ought to go. I’ll just tell you that right now. But we need African-American businesspeople to be able to take their places, too.

RUSH: (impression) “We gotta do something about the Asians coming in, open up businesses, dirty shops. They ought to go. I’m gonna say that right now.” Play the this again. You know, “Asians” encompasses a lot of people. When you say these Asians are running “dirty shops,” this encompasses a lot of people. I wonder, are they just gonna sit around here and do nothing? I don’t think so. It was an FBI sting that got Marion Barry. That’s what it was, and there he is back in office in DC. Here it is again.

BARRY: We gotta do something about these, uh, Asians coming in, openin’ up businesses, these dirty shops. They ought to go. I’ll just tell you that right now. But we need African-American businesspeople to be able to take their places, too.

RUSH: Well, how exactly is that gonna happen? You kick… (interruption) Well, but you… (interruption) Before you “ban Chinese food,” you first have to kick the Asian businesses out, right? But then how do you get African-American businesspeople to replace them? You just install them? I mean… (interruption) But… (interruption) Oh, that’s how you do it? Stimulus money. Oh! See, that’s where I was hung up. I thought you had to go find people who had money to invest it. (sigh) Oh, okay. Okay. It’s been a long two weeks, folks, and my mind didn’t function. I totally forget about Obama’s stash. That’s what he’s talking about: Stimulus. So we kick the Asians out, get rid of the Chinese restaurants and whatever else there he doesn’t like, and then get stimulus money and give it to the people he wants to have business.

RUSH: Mr. Snerdley, a quick question. Are you familiar with downtown Washington, Ward 8? (interruption) Are you really? My question is: The Asians there that Marion Barry has a problem with, are they “white Asians”? (interruption) You don’t know that? Well, I’d like to know. Maybe we’ll find out.