Bill Clinton Taken to the Woodshed

How are you, folks? Gee, I hope your weekend was wonderful. We are here, another full week of broadcast excellence, hosted by me, El Rushbo. Telephone number if you want to be on the program. 800-282-2882. And the e-mail address ElRushbo@eibnet.com.

So let’s go back. Last Thursday, on CNN’s Piers Morgan Tonight the fill-in host was Harvey Weinstein. I learned something about this. Harvey Weinstein, big Hollywood mogul, highest rated hour on CNN all day. They brought in a nonprofessional. Weinstein is a professional, but he’s an executive. He’s not an in-front-of-the-camera guy. He’s a director, producer. They brought in someone with literally no experience and he gets the highest rated hour of anything all day on CNN. That doesn’t say much for highly trained professionals and specialists.

And we later find out Harvey Weinstein called The Oprah for tips and guidelines on how to conduct interviews on television. I don’t know what he was told, but we know that Harvey Weinstein called Oprah. But anyway, this turned out to be the highest rated hour. It may not have been Weinstein. It could have been the guests. They had Clinton and a number of other A-list guests. It could have been that. Regardless, let’s go back, here’s what Bill Clinton said, the question from Harvey Weinstein was: “Romney keeps talking about his experience at Bain Capital and creating jobs and all that. Do you think he can produce jobs that the president, i.e., Obama cannot produce?”

CLINTON: I think he had a good business career. I don’t think that we ought to get into the position where we say, “This is bad work. This is good work.” There’s no question that getting up and going to the office and basically performing the essential functions of the office, a man who’s been governor and had a sterling business career crosses the qualification threshold.

RUSH: All right. Now, I characterize this as an endorsement. And Clinton was not the only one. There were a number of things that were said Thursday and Friday last week, spent a lot of time trying to drill home the fact that they were profound endorsements. Some really serious defections from Obama last week. And there was another one over the weekend. Bob Shrum, who has yet to win a campaign for the Democrats was on Sunday’s show. Did you see it Snerdley? You’re nodding. Bob Schieffer, poor Bob Schieffer. He’s still upset that Obama is running a negative campaign. He’s distressed that Obama’s campaign has gone negative. We have the sound bites. 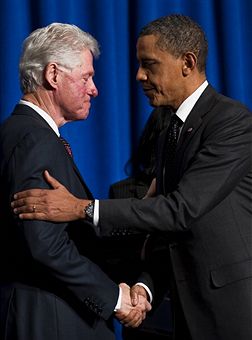 RUSH: So here’s Clinton basically endorsing Romney, talking about his sterling business career. The question was: “Do you think that Romney can produce jobs that the president can’t?” He said, yeah, basically. On Friday, I characterized this as essentially an endorsement. And I think I was one of the few who actually characterized it that way. Maybe nobody else did. Everybody was reacting to it. Everybody was talking, “Whoa, what’s this throwing Obama under the bus?” But in terms of calling it an actual endorsement, that’s a powerful word.”

So Friday, late in the day after this program — in Paterson, New Jersey, at a campaign rally in support of a Democrat Bill Pascrell — Clinton spoke. And he was clearly irritated at having been characterized as “endorsing” Romney.

CLINTON: So today — because I didn’t attack him personally and bash him — I wake up to read all these stories taking it out of context, as if I had virtually endorsed him.

RUSH: There wasn’t any “virtual” about it. It’s everything but the word. So Clinton was very upset. “Just because I didn’t bash him…” Well, let me tell you something: The Republicans can’t win no matter what they do. There was an example I had last week. Let me give you another one. There’s a possibility that Marco Rubio will be the vice president. His name is floating out there. So they ask Axelrod about this. (paraphrased) “You can’t put him on the ticket! The Republicans can’t do that! That’s an insult to Hispanics. You can’t put Rubio on the ticket! That’s an insult. It’s an outright insult to Hispanics.”

I don’t know how it’s an insult. But here on the one hand Republicans ignore and don’t care about the minority population, and then they might put one on the vice presidential ticket. “That’s not fair! You can’t do that! They don’t mean it!” So the Republicans can’t win if they lose. No matter what. They can’t win for losing, which just means don’t listen to any of the criticisms because you know it’s going to be forthcoming.

So anyway, Clinton’s out now trying to distance himself from it. That means he got taken to the woodshed, the Cory Booker Memorial Woodshed.

RUSH: I’ll tell you what, folks: High-profile Democrats criticizing Obama opens the door for others to do it. And others have. This is a door that has been opened and a lot of high-profile Democrats are now starting to criticize Obama. Bob Shrum is the latest to say Obama can’t run on his record; if it’s a referendum against Obama, we lose. What this indicates to me… And I don’t know what it means in terms of anything substantive. It’s fascinating to track this.

What it means is that there really hasn’t been all of this slavish unity behind Obama. There’s been more of a mandated “everybody go along to get along” to put up a unified-front aspect to it. A lot of people are very nervous. A lot of people in the Democrat Party are extremely worried about this record, extremely worried about their electoral chances. You know, we hear all this talk about the Republican establishment (and it’s true, by the way, in their case) just last week or the week before finally starting to think they can win this.

What we are learning (and what is, I think, more important) is that for much longer than that, high-ranking Democrats all across the country have been convinced that they are going to lose. They’ve been convinced and/or scared they’re going to lose, and they have had those opinions — they’ve had those thoughts — for much longer than just the last couple of weeks. But once these floodgates open and all of these Democrats talk? When one person does it and gets away with it? There have been trips to the woodshed, but there hasn’t been any party discipline.

Obama hasn’t done anything, or Axelrod, to punish these people for coming out. And I made this point on Friday: If these people aren’t taken to the woodshed seriously, if there isn’t discipline forthcoming to keep these people in line, if these leaks and these defections continue to happen… And it’s likely to as more and more prominent Democrats now openly express their concerns.