RUSH: I got Tom Barrett, the Democrat candidate for governor of Wisconsin. He was on CNN’s Starting Point this morning with the host Soledad O’Brien. And the first thing she did, she played a clip of Governor Walker saying the people of Wisconsin are tired of the negative attack campaign ads. Then she said, “Do you think that’s true, not just the assault and attack ads. I find them annoying. But recalls. Wisconsin leads the way in recalls. Twelve recall elections since 1990. It’s expensive. Does the governor have a point, Mr. Barrett?”

BARRETT: There’s no question people are tired of what I call this political civil war, where neighbors don’t want to talk to neighbors, relatives don’t want to talk to relatives about politics because it’s too bitter, it’s too divisive. What Governor Walker doesn’t say is he was the one who — and these are his words — dropped the bomb and attempted to divide and conquer. I agree with him that people are tired of the fighting, but I think the cause is to get rid of the instigator rather than to allow him to continue because I think this state will remain this bitterly divided if he continues in office. 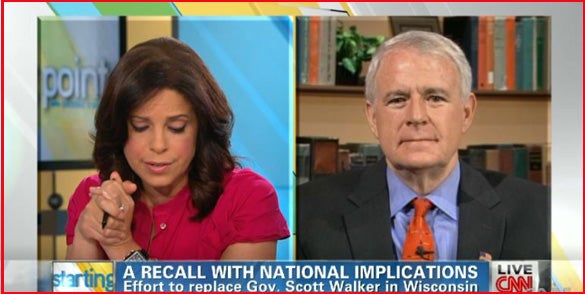 RUSH: Walker started it! They are the ones who authored the recall. They say that Scott Walker started this. I wanted to play this next bite, too, because it’s very illustrative of why the partisan divide exists. Walker campaigned. He got elected on an agenda. He implemented the agenda. They fought him at every step of the way of implementation. He prevailed. Everything he said he was gonna do, he did, and it has resulted in benefits to the state in terms of lower unemployment, higher economic growth, and the state has a surplus now instead of a budget deficit. And they recall him. They’re recalling him over policy differences. All he did was what he said he was gonna do.

So now they start this recall business, claiming that he started it, and they think that. He started it how? By winning. As far as the left is concerned, he had no business winning. He’s a conservative Republican. They are gnats. Conservative Republicans are just insects. You know, you get a can of Raid. They’re not supposed to take over your house. They’re not supposed to win anything. His crime is that he won, and that’s simply intolerable. We don’t like elections, say the left. Elections are a problem in a democracy, because sometimes the people we don’t agree with win them. That’s intolerable. That’s how they think. I am not exaggerating or making it up.

This next bite is exactly what is at stake. Soledad O’Brien said, “People say this could be a predictor of where the national election is gonna go. Yet you don’t really see Obama’s fingerprints in this. He sent out a tweet yesterday.” Imagine that. Obama sent out a tweet as a campaign support statement for Tom Barrett. By definition, it was less than 140 characters. He sent out a tweet. That’s as close as he wants to get because he doesn’t want the loss tied around his neck. The greatest indication that they don’t think they’re gonna win this thing is Obama wanted to get nowhere near it. So Soledad O’Brien says, “He sends out a tweet yesterday. ‘It’s Election Day in Wisconsin tomorrow. I’m standing by Tom Barrett. He’d make an outstanding governor.’ But that’s not exactly the president showing up and saying, ‘This is my guy, vote for him. Come on, we need him to win.’ Do you feel like you’ve been a little ignored by the president, Mr. Barrett?”

RUSH: Right. That’s exactly what is at stake here. The Democrats know that if Wisconsin affirms what Walker’s doing, liberalism is in trouble all over the country. They know liberalism is in trouble anyway. There is no grassroots in Wisconsin. These were bussed-in union thugs from all over the country, primarily out west. But they were bussed in there. The grassroots in Wisconsin’s the Tea Party. The Republican Party’s the minority party in Wisconsin. Wisconsin’s a blue state, or has been. The grassroots is the Tea Partry. That’s what they can’t deal with. That’s what they can’t get their arms around.

RUSH: Huge turnout in Wisconsin, supposedly a 30-minute wait to vote in some places. I read that it’s gonna exceed 60%. Snerdley, how would you interpret a high turnout today? Bad for Barrett. Bad for Barrett. Why will you say that? Hm-hm. Well, I was gonna say, in the primary, Walker got more votes than Barrett and the babe combined. That was heavy turnout then. What was most striking about that was that nobody needed to vote for Walker that day. Nobody needed to. He was the de facto incumbent governor. There was no serious opposition. Republicans could have easily stayed at home. They showed up in greater numbers than Democrats, who wanted the recall. And that was just a month ago.

So what’s changed that would make Republicans stay home? Not much, if anything at all. I’m hearing that the election officials have had to call in more poll workers because the turnout is so heavy. It’s a blue state. I think that remains the telling point. If Barrett was gonna win, Obama would have been there. Obama would have been on stage shaking hands, arms raised, you know, the whole nine yards. Here’s Obama with six fundraisers bordering Wisconsin but never once setting foot in the state last Friday, and then sending out some paltry little tweet to endorse Barrett.

RUSH: Fox News: “An Eyewitness Alleges Democrat Union Vote Fraud in Wisconsin.” No big deal. It’s like the sun coming up in the morning. It just means that Walker is going to have to win by more than the margin of fraud rather than the margin of error.