RUSH: We got a lot of Wisconsin callers. Madison first. This is Sarah. Thanks for the call. Great to have you here. Hi.

CALLER: I’d like to thank you for keeping us informed. You know, today was actually a really emotional day voting in the state. And, you know, just hearing how out of touch Obama is running around with celebrities and sending all the union thugs into our state. You know, folks here just want to get back to normal lives. Voting should be emotional. It’s becoming really overwhelming living here in Wisconsin. My ride to work today on every corner there are protesters. People have voter fatigue, no matter what they say in the polls about this state. My friends that are liberals are expressing, you know, their concerns and the fact that they’re just exhausted with everything.

RUSH: Let me tell you something. This is a showdown election, Sarah. There’s a lot on the line here for everybody.

RUSH: Particularly the Democrats. But I’ll tell you, there’s also… I understand you’re fed up. All these elections, it never ends, and everybody’s in the state’s at war with one another. Who wants that? Who wants to live at war, particularly with your fellow citizens? I know that’s what you’re saying. I don’t blame you at all for feeling the way you do. But we all know what’s on the line for the Democrats and Obama. And they know it, too. But, folks, there’s another side to that.

And that is: If Walker loses this thing, you can forget any other Republican governor taking on the unions. You can forget it. It’s gonna be a long time before another steel-spined Republican governor comes along. Nobody in politics wants to go through this, no matter how much you believe it. This is the kind of harassment and destruction that the Democrats and the left are famous for, and they want to just wear you out. And if Walker loses this, the fallout on the Republican side is somewhat troubling.

Why would another Republican governor take ’em on, if this is what’s gonna happen?

A “Peter Pan” signature was counted as a registered voter. The judge said it counts. All those signatures counted. They got enough signatures to recall Walker, and it’s strictly about policy. Nothing more. It’s not about malfeasance, it’s not about corruption, it’s not about crime. It’s simply about policy disagreements. And I’ll tell you: This guy Walker is one of the gutsiest, toughest, strongest, committed guys I have seen in Republican politics in a long time. He deserves to win this, and he deserves to be celebrated tremendously after this victory today.

RUSH: From WisPolitics.com. Are you ready? This is from just before noon Eastern time today. “With only about four hours into the Election Day voting, members of the Milwaukee Democratic Party claim that calls are going out to voters telling them if they’d signed the recall, they didn’t need to vote today. Milwaukee County Dem Chair Sachin Chheda said that Walker supporters can’t get through the day without ‘cheating.’ ‘This latest lowlife sleaze comes on the heels of countless reports from around the state of various Republican dirty tricks on behalf of Walker,’ Chheda said in a statement.”

Let me tell you what I’ll bet you is going on. The Democrats know that they’re down by five or six or maybe more points. The Public Policy Polling poll, which is a strictly far-left liberal agenda oriented polling outfit had Walker up by three, just outside the margin of error yesterday. If they could, these people would have published a poll with Barrett ahead of Walker, but they’ve got their credibility. I’m telling you this is not a three point race going in. The Democrats, you got the DOJ in there monitoring the elections, the Democrats are already talking about cheating.

I can’t prove it, obviously, I’m not there, but this is too made to order. Republicans simply don’t do this stuff. What’s happening is the Democrats are probably making these phone calls. The phone calls have to be happening. Even if it’s just one or two, the phone calls have to be happening for the charge to be made. Somebody’s out there making prank calls so that the Democrats can level a charge and set up a protest or a recount or what have you, no matter what the margin of victory.

Tammy in Madison, thank you for waiting. Great to have you on the program. Hi.

CALLER: Hi, Rush. Oh, I’m so thrilled. This is a great honor to talk to you. 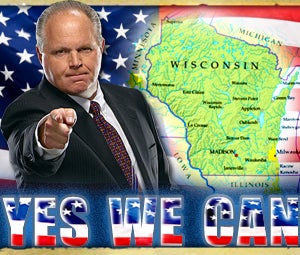 CALLER: I’m not only in Madison, but I’m in the belly of the beast. I go to grad school at UW, and I teach at another local college, and I’m telling you, there is absolutely no compromise with these people. I hear it in every classroom, in every semester, more and more extravagant claims. If you try to debate the finer points —

RUSH: See, you can’t. It’s not even a matter of compromise. If what I saw in that focus group last night is at all representative — and it would have to be or Luntz is not doing his job, it would have to be a representative crossover — you could hit these people between the eyes with the fact that two and two is four, and if you were told Scott Walker said it, they wouldn’t believe it. There is no penetration by a fact that can get through to these people, none. If you can’t even put facts on the table without them being rejected on a partisan basis, what possible compromise is there?

CALLER: There actually is none. You can’t carry on an intelligent debate with them. In my classroom, as a teacher, as an instructor, you can force the issue and luckily I’m able to do that, but as a student, you just can’t. You cannot.

RUSH: Well, it’s gotta be frustrating. As I watched this focus group last night, you know, Hannity took it over from Luntz. He said, “Well, wait a minute, now. The unemployment rate in Wisconsin is just over 6%. It’s way below the 8% national average.”

“No, it’s not. That’s just another Walker lie.”

“Well, nobody has been fired. Scott Walker has not laid off anybody, none of the union claims…”

“That’s not true. I know people that are losing their jobs left and right.”

“Scott Walker, the taxes, everything he said he was gonna do…”

It didn’t matter what the facts were. It did not matter. It didn’t exist. It wasn’t true. It was all trickinology. I’ve seen it before, folks. This is not the first time I’ve ever seen this. I know I sound incredulous. I encounter it quite often. But it was concentrated, and in this setting, and the presentation of fact was rat-tat-tat-tat. And all the facts were true. I live in Realville. I’m not interested in lies. I’m not interested in things that are not right. These people couldn’t-a cared less. They have an entirely different motivation. Being right, factual, is irrelevant to them. All that matters is the triumph of their ideology. But here’s a guy, Scott Walker, who’s being recalled for one reason. He’s doing what he said he was gonna do. It’s a policy recall. He ran for office, he got elected on a specific agenda, and he has implemented it. And now the Democrats are trying to recall him for it. If this kind of stuff ever gets hold, elections are gonna be meaningless. Elections are just gonna become another poll. Tammy, I appreciate the call.

Scott, also in Madison, Wisconsin. Great to have you here. Hi. 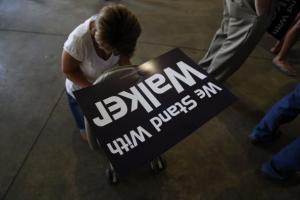 CALLER: No, if they were conservative they were probably sitting there with their hands in their lap.

RUSH: Well, even the conservatives seemed afraid to say anything, and those that did, you’re right, the cameras being present, I think, stopped any violence or any things being thrown or things like that.

CALLER: Oh, that doesn’t stop the liberals. What it does is stop the conservatives from, you know, even be putting up yard signs. We just don’t do it. I mean I figure for every Barrett sign there is, every empty yard, there’s gotta be at least one Walker sign that’s not up because we’re afraid to. But no, every bit of union thuggery and union hackery that could possibly be had is happening here. And someone comes up and says, “Oh, yeah, we’re gonna help the vote in ‘Wesconsin.'” I’m like, “Really?” “Oh, yeah, we’re from, you know, ‘Monoma.'” “Oh, you mean Monona?” You know, they’re not even pronouncing things right, like Oconomowoc, Mequon, Waukesha, and Racine. You know, when they can’t even pronounce Wisconsin or any of our cities right, you just know none of ’em are from here and they’re all brought in.

RUSH: I know, and that’s been the case since this whole recall effort began. But that’s interesting. If what we saw last night were the polite, calm, reserved, it’s worse than even I thought.