RUSH: I have to laugh, folks. I laugh at the conventional wisdom and I laugh at the smart people, the way they think, inside the Beltway. You heard on this contempt citation against Holder and the executive privilege thing of Obama, have you heard the advice Romney’s getting? “Don’t talk about that. You better stay focused on the economy, Bud. Don’t get sidetracked. Obama and Holder pulled off a brilliant scheme here and are gonna distract everybody, no decision on this before the election, don’t worry about it. They’re trying to distract everybody.” I don’t doubt that Holder and Obama were praying for a major Supreme Court decision today. I have no doubt they were praying — I don’t know how often they pray, and to whom, but I bet you they were praying for a giant decision today to distract everybody from this executive privilege business.

And I’ll tell you something else Obama’s gonna want people to be distracted from. It is becoming apparent as we go through his book and read David Maraniss’ book about his book, that this guy’s a fraud. That he’s literally made up his life story. In that book, this biography of Obama’s is all about these epiphanies on the road to racial understanding and self-realization and all that gobbledygook left-wing garbage. And at every one of these moments where Obama, as a young child, as a young man, as a growing adult, realizes that reality strikes him and his life is filled with greater understanding, and he moves forward and matures, every one of those events is fraudulent, made up.

There’s even a headline, I think it’s Investor’s Business Daily, asking “Is Obama a Pathological Liar?” So he’s gonna want people distracted from that. He’s gonna want people distracted from the executive privilege. But they’re warning Romney (muttering), “Don’t talk about this executive privilege, bud. You better stick with the economy.” He can do everything! We’ve got plenty of time here. It’s starting to fall apart for Obama. We’re getting closer and closer and closer to Jimmy Carter 2, almost verbatim.

But the economic news today is big. We aren’t distracted. As you know, we cover everything because I am America’s real anchorman. Oh, did you hear about the Nightly News last night? All three networks, what did they lead with? ABC led with the heat wave. (laughing) Here you’ve got the attorney general held in contempt by a congressional committee. You’ve got regime invoking executive privilege for only one of two reasons, neither of them good.

ABC leads with a heat wave! Brian Williams talked about Fast and Furious for the first time in a long time with a smirk on his face. He was very disappointed, and he just said this just a sign of “our broken politics.” That’s all it was. CBS did a little bit more than the others because they’ve got Sharyl Attkisson who’s been on the case on this. But they treated this as a ho-hummer. The networks, I told you yesterday, would rally. 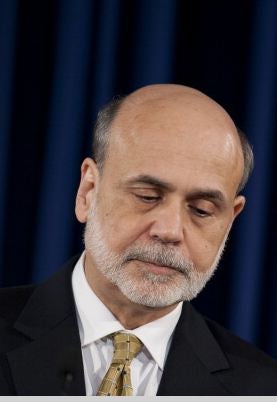 They’re circling the wagons to defend Obama on this. They’re not interested in it whatsoever. Yesterday they were shocked and stunned. “Oh, my God, executive privilege?” That’s death. That’s Nixon to them. But give ’em time to reconnoiter and put themselves back together after the big shock. They’ll start circling the wagons to construct this impenetrable wall where nobody will get inside and learn any more about this at the regime level.

The number of claims for unemployment are up, and we are creeping dangerously close back to the threshold of 400,000 a week. And we’ve got the Fed with their revisions of their economic forecasts, and they have revised downward their prediction for economic growth. They have revised upward their prediction on unemployment. It’s ugly out there. It is really, really ugly. And Romney has outraised Obama somewhere in some state, and get this. (chuckles) I saw this story. The Drive-Bys reporting this story were shocked. They couldn’t believe it.

The story is, Obama is spending money faster than he’s raising it. No kidding.

This guy who’s raised the national debt more than all the other previous presidents combined with trillion-dollar deficits every year — the most irresponsible chief executive in terms of spending and everything else we’ve ever had — and they’re shocked that Obama is spending more than he’s raising. I don’t know, folks. We’re surrounded by idiocy. Everywhere we go, we are surrounded by stupid people that are supposed to be smart.