RUSH: President Kardashian is on television as we speak. I decided not to JIP President Kardashian. I figure you’re angry and depressed enough as it is. He’s basically rehashing all of the lies he told about what health care is: how it’s not gonna cost you any more, how you get to keep your doctor, how all these people are gonna end up being insured that weren’t insured. About that, you know, people are still digging through this thing. The ruling is close to 200 pages. The law itself is 2,700 pages. Yes, he’s spiking the football. Of course he was gonna spike the football. We were the only ones who weren’t gonna spike the football. Of course he’s spiking the football.

I’m really concerned here, the amount of power this guy is now going to think that he’s got. And it’s payback time now, by the way. Ask Arizona about that. This is payback time. But they’re gonna have to readjust their campaign strategery, ’cause I know Obama was gonna run against, you know, four white guys and an Uncle Tom. He can’t run against the Supreme Court now. He’s really had a big campaign issue taken away from him in one sense, and we’ve had one-handed to us. This whole thing has now become purely political. With the court ruling that this is a tax and it turns out to be the largest tax increase in world history and a tax that we were deceived about, it becomes a purely political issue. It’s made to order for the campaign, made to order.

Obama’s got nothing to defend. He can go out there and defend this bill all day long, but the number of people who don’t want any part of it just multiplied. He’s gotta go out and defend and brag about a law that nobody wants, or a vast majority of the American people don’t want. He has to go out and try to defend an economic plan that’s resulted in destruction of the American private sector. You try to look for positives wherever you can, folks, and along those lines, there is a, to me, still somewhat confusing aspect of a ruling here on Medicaid and the states. There’s this little excerpt here from the majority opinion.

“Nothing in our opinion precludes Congress from offering funds under the (Affordable Care Act) to expand the availability of health care, and requiring that states accepting such funds comply with the conditions on their use. What Congress is not free to do is to penalize States that choose not to participate in that new program by taking away their existing Medicaid funding.”

So the Supreme Court apparently has decided that the government, in this case the Department of Health and Human Services cannot penalize states who choose not to participate in the new Medicaid expansion. Again, “Nothing in our opinion precludes Congress from offering funds under the (Affordable Care Act) to expand the availability of health care, and requiring that states accepting such funds comply with the conditions on their use. What Congress is not free to do is to penalize States that choose not to participate in that new program by taking away their existing Medicaid funding.”

So they can’t do a health care version on Arizona, like they did on immigration in Arizona to the rest of the states. But remember who we’re talking about here. We’re talking about the Democrat Party and President Obama who picks and chooses which parts of the law that he seeks to ignore and accept.

Mitt Romney spoke just before noon about this. We have three sound bites. Here is the first of the three…

RUSH: And he continued…

ROMNEY: This is now a time for the American people to make a choice. You can choose whether you want to have a larger and larger government, more and more intrusive in your life, separating you and your doctor; whether you’re comfortable with more deficits, higher debt that we pass on to the coming generations; whether you’re willing to have the government put in place a plan that potentially causes you to lose insurance that you like. Or whether instead you want to return to a time when the American people will have their own choice in health care, where consumers will be able to make their choices as to what kind of health insurance they want.

RUSH: And he wasn’t finished. One more bite we have for you. 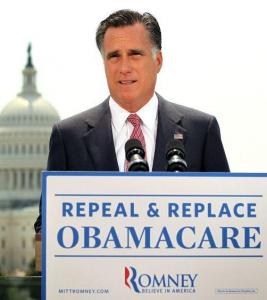 ROMNEY: If we want to get rid of Obamacare, we’re gonna have to replace President Obama. If we want good jobs and a bright economic future for ourselves and for our kids, we must replace Obamacare. That is my mission, that is our work, and I’m asking the people of America to join me. If you don’t want the course that President Obama has put us on, if you want instead a course that the Founders envisioned, then join me in this effort. Help us. Help us defeat Obamacare. Help us defeat the liberal agenda that makes government too big, too intrusive, and is killing jobs across this great country.

RUSH: So that’s the Republican presidential nominee, Mitt Romney, just before noon today reacting to Obamacare. The Washington Examiner has a story here that Republican governors are planning to ignore the Supreme Court decision today to uphold Obamacare, hoping the issue will drive voters to dump Obama in favor of Romney who’s vowed to kill Obamacare.

“Republican governors are planning to ignore the Supreme CourtÂ’s decision [today] to uphold Obamacare hoping that the issue will drive voters to dump President Obama in favor of Mitt Romney who has vowed to kill [Obamacare]. After the decision, the Republican Governors Association said that nothing should be done by the states until after the election, a clear signal that they believe a [Republican] president, House and Senate will kill [Obamacare].

And does so as a result of a massive tax increase that the regime, the president, and the Congress all denied this bill was.

Our freedom of choice just met its death panel: The Supreme Court.

RUSH: Our freedom of choice just met its death panel: the Supreme Court of the United States. Again, there may be an outcome to this that the regime did not anticipate. And it’s this. The Supreme Court has ruled — I just want to repeat this again — that states cannot be stripped of federal money for not expanding their Medicaid rolls. They can opt out of the Medicaid expansion. And the reason they will is this health care bill puts all the financial requirement on the states. It mandates massive expenditure increases in Medicaid and tells the states they have to spend the money. They can’t print money. The states cannot print money. They don’t have it. The states are in terrible shape, those where there aren’t any oil booms going on. Pensions, health care obligations, unfunded liability, states don’t have the money for this.

What this means is that there likely will end up being more uninsured people than there were under previous projections, and guess who these people are? The poor! The people who, in this country, really, if you want to talk about people that don’t have health insurance, you’re talking 10 to 16 million people who want it but don’t have it. That’s what all this was about, 10 to 16 million people. Those people are the ones who may be aced out here, because if the states do not have to participate in the Medicaid expansion, they cannot be penalized. The court says right here, what Congress is not free to do is to penalize the states that choose not to participate in that new program by taking away their existing Medicaid funding.

So the states can stay, “We don’t have the money. We’re not participating in this expansion, and you can’t take away what we’ve got.” If it happens like that, the people that end up being harmed are the very people running around today thinking that the result here is they’ve got free health care. How many of you people, in your office today, or wherever you happened to be when the ruling came down, how many of you people — I don’t know; could be zero — how many of you had somebody come up to you and say, “Does that mean health care is now free?” I guarantee you there are some who think that, that that’s what this means. That’s what they thought when it passed. They thought health care was free when it passed. Remember, we had the sound bites now. The Supreme Court’s affirmed it.

“Wow, so now my health care’s really free.” I’ll tell you what, not only is it not free, you may not get any health insurance whatsoever. Now, the federal government has recourse if states do this. I call your attention to Colorado, which is burning alive, and one of the reasons why is that Obama has cut the budget necessary for a number of these tanker airplanes that drop chemicals on fires. Because the environmentalist wackos convinced Obama it was a waste of money. Once there’s a fire, let it burn. So people are being forced out of their houses. So let’s just say, to use a real world example here, say Colorado is a state that decides it’s not gonna participate in the Medicaid expansion, and the court says, “They can’t be penalized for not doing so. Government cannot take their existing Medicare money away.” Well, in a situation like this, Obama could say, “Oh, your state’s on fire? Okay, well, I’ll take a look as I fly over on my way to California for a fundraiser.”

In the case of, let’s say Louisiana, let’s say there’s another hurricane that goes through there, devastates part of the state. Let’s say Louisiana has not participated in the Medicare expansion. Obama can say, “Well, you know what? We don’t have anything for you. FEMA is too tied up.” So there are ways that with political payback, a guy like Obama can punish a state for not playing ball his way, and he’s shown that he will do so. Arizona is looking like a prime example of this right now. Arizona dared to stand up to The One, and now Arizona essentially has no border. Arizona has no way to stop. And all this is being done under the rubric of social justice.