“In a wide-ranging interview with The Huffington Post from his office on Capitol Hill, Reid saved some of his toughest words for the presumptive Republican presidential nominee. Romney couldn’t make it through a Senate confirmation process as a mere Cabinet nominee, the majority leader insisted, owing to the opaqueness of his personal finances. ‘His poor father must be so embarrassed about his son,’ Reid said, in reference to George Romney’s standard-setting decision to turn over 12 years of tax returns when he ran for president in the late 1960s.” Mitt has released two or three years. 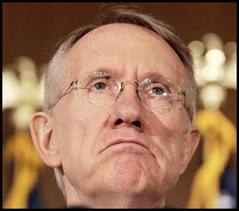 Now, Harry Reid, this grotesque little man, is the highest-ranking Democrat in the Senate, and second highest-ranking Democrat in the United States. He’s been in the Senate since 1987. He’s never released any of his tax returns, in all of his years in Congress, probably because they would reveal how he got rich from dubious land deals that have been highlighted by the LA Times, which nobody cared about. The Huffing and Puffington Post fails to mention any of that about Dingy Harry.

Dingy Harry said he’s got “‘no problem with somebody being really, really wealthy,’ Reid sat up in his chair a bit before stirring the pot further. A month or so ago, he said, a person who had invested with Bain Capital called his office. ‘Harry, he didn’t pay any taxes for 10 years,’ Reid recounted the person as saying. ‘He didn’t pay taxes for 10 years! Now, do I know that that’s true? Well, I’m not certain,’ said Reid. ‘But obviously he can’t release those tax returns. How would it look?'”

Isn’t it convenient that this charge supposedly comes from a Bain investor. Look at the absolute bilge and drivel this party puts out each and every day that people have to deal with. Let me ask you a question. You are Mitt Romney. It is obvious, is it not, that Mitt Romney has had political aspirations for many, many moons. He quits Bain. He goes to the Olympics. Do you really think that a guy who ran for Massachusetts governor, who has run for president twice now, and who has had plans to do this for many years, would actually not pay any income tax for ten years? How would somebody at Bain Capital know this, by the way? The only people that would know this would be Romney and his financial people and the IRS. Are we really supposed to believe that somebody with aspirations to hold the nation’s highest office, in preparation for this, would go ten years without paying taxes, even if it was legal.

By the way, I don’t know that Dingy Harry is asserting any illegality here, but just the fact that somebody was able to whittle their tax rate down to zero obviously would not be helpful, even if it’s legal. The media and the Democrats take care of that. But, does anybody think Romney would actually do that, pay no taxes for ten years, with full knowledge that there would be people that would know this? Why would a Bain investor have any knowledge of Romney’s taxes over the last ten years?

This reminds me of all of Dick Gephardt’s phantom friends. You know, Little Dick Gephardt, every now and then he’d tell a story, “Yeah, I had a rich business owner call me the other day, and this rich business owner said, ‘Dick, I’m not paying enough in taxes. I’m not paying my fair share, Dick. And I need somebody to do something about that.'” Gephardt had these phantom friends all over the place. These Republican rich people who, every time a Democrat idea got into some trouble, Little Dick’s phantom friend would call him and try to make it appear that even the Republicans like the Democrats idea.

REID: Well, I don’t accept your phraseology. I don’t think we force people —

HELFELD: Taxation is not forceful?

REID: In fact, quite the contrary. Our — our system of government is a voluntary tax system. The fact of the matter is is that if, when you pay your taxes — you see, many other countries it’s not voluntary. For example, in many countries, the government makes sure that your employer takes out every penny. In some countries, European countries is an example, you don’t file a tax return, there is no need to, because your employer takes all the money out. That’s the difference between a voluntary and involuntary system.

RUSH: Oh, okay. So Mitt Romney could I guess say, you know, I just decided not to pay for ten years, Harry. See, in Europe, the employer takes all the money out. That’s not how we do it in the United States. This is the second most powerful Democrat in the country, the most powerful Democrat in the Senate, and he said four years ago. (imitating Reid) “No, no, no, it’s voluntary. We got a volume system. Now, in Europe, the government makes sure that your employer takes out every penny. Some countries, you don’t file a tax return. There’s no need to because your employer takes all the money out. That’s the difference between a voluntary and an involuntary system.”

Didn’t Romney run for president in 2008? Are we supposed to believe he didn’t pay taxes when he was running for the presidency? We don’t know what ten years Dingy Harry’s talking about. Anyway, here you have, it’s voluntary. In Europe, see, the employer takes all the taxes out. That’s not how we do it here. You heard him say it. I wonder, Harry Reid, did Harry Reid commit a felony? I mean he’s passing out information about someone’s tax returns leaked to him. Something is scratching at me that that’s not legal. Maybe Dingy Harry’s a felon. Maybe Dingy Harry, this grotesque little man, just committed a felony passing out, talking about information about someone’s tax returns leaked to him about Romney’s taxes, a Bain investor.