RUSH: Did you see Dinesh D’Souza’s column? I guess it was Wednesday of last week. I forget where it ran. I had just interviewed Dinesh D’Souza for the Limbaugh Letter, the most widely read political newsletter in America. He’s got his movie out. Dinesh D’Souza went over to Kenya and met with Obama’s half-brother who lives in the hut, George Obama. Well, something happened. George Obama needed $1,000 for some medical emergency.

Obama’s brother needed a thousand dollars and called Dinesh D’Souza. Dinesh gave the money, and Dinesh tried to explain in a column why Obama will not help his brother. Dinesh theorizes it’s because his brother’s not a socialist. I’m summarizing it, but essentially Obama doesn’t like his brother because of political differences. And that’s why doesn’t help him. Well, who cares what the reason is? This is inexplicable, and there was no reaction to this. I purposely waited all last week, all through it weekend.

I wanted to find out the reaction. That’s a bombshell of a story to me. I mean, even People magazine I’d think would get a little upset about that. The biggest socialist in the world, the guy who tries to tell us he has the biggest heart and cares more about anybody than anybody else ever has: Barack Obama. And his own brother doesn’t even try to call him for help! He’s still living in a six-by-nine-foot hut and has to call a journalist for financial assistance. And that’s not a story? 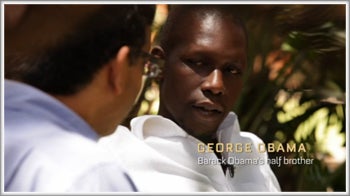 It takes Todd Akin on St. Louis TV to get Obama to go meet the press for the first time in two months?

Not the unemployment rate?

Not the sad state of the US economy?

Not the building threat of Iran or China?

This is why we have to replace this man and his entire regime.