Poll: McCaskill Up 10 After Akin Debacle

RUSH: We have the first polling data out from Missouri, and it’s a Rasmussen poll, and it isn’t good. Claire McCaskill is up by at the present points over Todd Akin in Missouri, 48% to 38%. This is how Rasmussen writes it up: “What a difference one TV interview can make. Embattled Democratic incumbent Claire McCaskill has now jumped to a 10-point lead over her Republican challenger, Congressman Todd Akin, in MissouriÂ’s US Senate race. 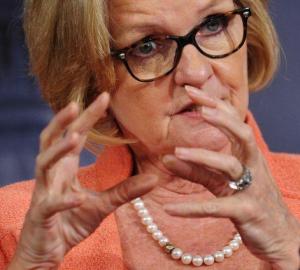 Most Missouri Republicans want Akin to quit the race while most Missouri Democrats want him to stay. The latest Rasmussen Reports telephone survey of Likely Voters in the Show Me State finds McCaskill earning 48% support to AkinÂ’s 38%. Nine percent (9%) like some other candidate in the race, and five percent (5%) are undecided.”

So, let’s go to the audio sound bites on this. The Democrats have made a Todd Akin ad. Oh, by the way, there were 14 polls released yesterday regarding the presidential race and a couple other things. The media’s concerned. The swing states, it’s tightening up out there, noticeably so, and that means it’s tightening up even more than the polling data indicates.

RUSH: The Democrats have made a Todd Akin ad. And it was yesterday in Massachusetts, the Elizabeth Warren campaign website.

ANNOUNCER: Have you ever heard this? A Republican running for US Senate in Missouri actually said a woman who was raped won’t get pregnant. Listen…

AKIN: If it’s a legitimate rape within the female body has ways to try to shut that whole thing down.

ANNOUNCER: This can’t be happening in 2012, right?

RUSH: That’s just the first of many that are going to run. Akin is down ten to McCaskill now. That’s a radio ad as part of the Elizabeth Warren campaign. I shudder to think that something done on our side could resuscitate her campaign. Okay, so let’s keep going. Mary Matalin last night on Anderson Cooper 360. They were talking about this “legitimate rape” business. And Cooper said, “Mary, do you really believe that this is not gonna influence some people’s vote? I mean, I know clearly the economy’s issue number one, but when someone gets into that voting booth, particularly a woman, do you think that Akin and his ‘legitimate rape’ comment is not going to impact them?”

MATALIN: I think it could, if it wasn’t soundly and roundly and universally condemned by every Republican from Mitt Romney to Rush Limbaugh. Look, women — believe it or not — are used men saying stupid things. And woe be to the male population if women attributed ignorance to all men based on the ignorance of one man.

RUSH: And she knows what she’s talking about; she lives with Carville. You have to give her that, folks. She sounds like some of the women callers we had yesterday. She’s an expert on this; she lives with James Carville. “And woe be to the male population if women attributed ignorance to all men based on the ignorance of one man.”

RUSH: Dick Morris weighed in on all this Akin stuff last night on the O’Reilly Factor, Laura Ingraham filling in. Here’s the question: “Now you see Democrats coming forward and saying, ‘Well, up in until a few days ago Paul Ryan and Akin agreed on these issues. They worked together on that Human Life Amendment to stop funding abortion,'” blah, blah, blah. “They said, ‘If he was with him then how can we trust him now?’ They are taking that nugget and exploding it to try to divide the voters,” Dick. What’s going on here?

MORRIS: All of this makes it clear that Romney’s not there. All of this makes it clear that the Republican Party did in fact nominate Romney, not Gingrich or Santorum. And Obama would much rather run against Gingrich or Santorum because he can use them unfairly to scare women. But he can’t use Romney that way. And I think that this is a very effective move by Romney. Sometimes on defense, you can score points you couldn’t possibly score on offense.

RUSH: What in the world…? What is he saying? Is he saying here that this gives Romney a chance to look moderate? What is this, “Obama would rather run against Santorum or Gingrich” business? They wanted to run against Romney from the get-go. Anyway, people are stretching here, folks. They’re contorting themselves into all kinds of positions to try to find something positive in this. Our old buddy Jerry Springer has weighed in on this. Jerry Springer was on CNN’s Piers Morgan show last night. Question: “Akin. It’s an extraordinary case. He says something unbelievably outrageous, and he hasn’t stood down despite every senior member of his party demanding that he go. What do you make of that, Jerry?”

SPRINGER: (haltingly) He’s not gonna step down because he’s gonna be a sympathetic figure for the far right within Missouri. So I’m not sure he’s out of it. In other words, I still think he has a chance of winning, as crazy as it was.