RUSH: Here is Justin in Casper, Wyoming. Nice to have you on Open Line Friday. Hi.

CALLER: Hey, Rush. Thanks for having me on. The last time I called you, I told you how I broke my back when I was 18 and how I should be the national welfare recipient criticizer, but for me I just want to tell you real quick that you’ve been a real encouragement as far as my life goes, telling us what a great country we live in and reminding us that, encouraging us of all the opportunities, and today, you know, I’m living the American dream. My point was, I guess I’m a birther, I guess you’d call it, but when I was watching the speech last night —

RUSH: Wait, wait, wait, wait whoa, just a second. What exactly does that mean, when you call here and confess to being a birther, what are you telling us?

CALLER: Well, for me, I don’t believe that Obama’s been truthful as far as his past goes. I don’t buy the latest certificate of —

RUSH: I just wanted to get that out there so everybody knew who you were. Okay.

RUSH: Take it away.

CALLER: So then I was listening to the speech Romney gave last night, and I heard that line about where he said, you know, takes an American to do the great things, and until I was listening to you today, it never even occurred to me that he was talking about taking a shot at Obama over the birth certificate thing. I never even once thought that. So I don’t know where the left’s coming up with that idea.

RUSH: Oh, they’re sick people. They are. It was at a moment in Romney’s address where he was memorializing Neil Armstrong, and I don’t have it right in front of me, but paraphrasing what Romney said, “When you need something big done, you get an American,” and immediately last night into today, led by the Cretans at MSNBC, that was coded language to birthers. That was Romney sending a coded message to the birthers that he knows Obama’s not an American.

Now, any normal person watching that, listening to what Romney said, just like you knew exactly what he meant, it was a testament to American exceptionalism. It was a reflection on a past in this country that was accurate. Whether it’s a disaster that strikes somewhere in the world, who has to show up before it’s gonna be fixed? Us. Traditionally. And we did it because we could, and it was the right thing to do, and that’s what moral superpowers do. They stand for freedom with their allies. They help out when necessary. We were the ones able to do it. When the world needs someone to do the really big stuff, you need an American. The very idea that there are people who can be offended by that, to me, is illustrative of what we’re up against.

See, for me, I don’t understand being offended by that. I can’t relate to being offended by that. I can’t relate to somebody seeing birtherism in that comment. Just like I can’t see racism when Romney mentioned Chicago, or some of these other outrageous things. That’s one of the best lines of the night. The best line of the night was when Romney said that Obama promised to lower the sea levels and heal the planet. (paraphrasing) “I promise to do everything I can to help your family.” That was the convention. That was the speech. That was the essence of it, boiling everything down to what we are all about, particularly now. Justin, I’m glad you called. Thanks very much.

RUSH: Here’s the entire Romney bite, in context, about Neil Armstrong and, “When you need somebody to do the big stuff, you need an American.” Here’s that whole bite…

ROMNEY: The soles of Neil Armstrong’s boots on the moon made permanent impressions on our souls. Ann and I watched those steps together on her parents’ sofa. Like all Americans, we went to bed that night knowing we lived in the greatest country in the history of the world.

ROMNEY: Tonight that American flag is still there on the moon, and I don’t doubt for a second that Neil Armstrong’s spirit is still with us — that unique blend of optimism, humility, and the utter confidence that when the world needs someone to do the really big stuff, you need an American.

Of course, the question is based in the belief that Brokaw would have to be profoundly embarrassed at what has happened to this network and this news division that has reached the gutter. It no longer even makes a pretense of journalism. So if you are one of the people that wonder what Brokaw thinks of what has become of NBC, you have to hear this. Last night on NBC’s coverage of the Republican convention, after Romney accepted the nomination, here is the first of two things that we have for you from Brokaw…

BROKAW: I happen to have spent some time covering his father, and he was a remarkable man of great integrity, who fought within this party to make it more moderate and make it less extreme and to make it more inclusive. And the evolution of Mitt Romney, the son, has been to go from being a moderate to being much more conservative.

Tom sounds like he’s right at home with these people now. “Yeah, I covered Mitt’s father.” I’ll guarantee you, back in those days, they hated George Romney like they hated any other Republican back then. “I remember George Romney. He fought hard and tried to make this party inclusive…” Again, we have more elected Hispanics than they do, and yet we’re not an “inclusive” party. We’ve got female governors, Hispanic female governors. First ones ever. We’re not inclusive. No, no, no. So there’s that. Then you just heard the celebration of Neil Armstrong from Mitt Romney.

Here’s Brokaw. He continued with his partial, I guess, reaction to that… 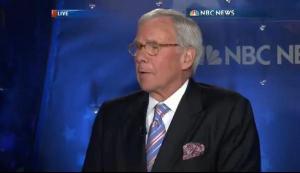 BROKAW: The other thing that was quite striking to me tonight, duhh, the centerpiece of what’s possible for this country was putting a man on the moon. There have been fewer larger government projects than that, and it did spin off a lot of private enterprise. But it was an enormous public-government investment that made that extraordinary achievement possible. And then, as I said earlier, it also spawned lots of scientific achievement across this country that was transferred to the private sector.

RUSH: I hate to break it to Brokaw, but the private sector did everything in the moon project. It built everything. The government took the bids, awarded the winners with the project. But, if you remember, Lockheed was all over everything. McDonnell Douglas made the Mercury capsule and, I think, the Redstone rocket. I forget. McDonnell Douglas, out of St. Louis, they were right there.

So for those of you wondering what happened to Brokaw, he’s probably running the joint.

He clearly isn’t embarrassed by what it’s become in any way, shape, manner, or form.

RUSH: Don’t forget, folks, the left hated NASA anyway. They didn’t want to go to the moon! They don’t want to go to Mars. They want all of that money for their precious social programs, and that’s why Obama has basically shut it down. So look at the stretch Brokaw has to go to to try to reclaim NASA because Romney did too good a job of making it quintessentially American.