RUSH: You see where Obama was asked in an interview what grade he would give himself? He gave himself an “incomplete.” I guess there’s still too many people with jobs. (laughing) Doesn’t that scare you? Gives an “incomplete.” What the hell does that mean? There’s no progress, so what does incomplete mean?

Obama did give himself a grade of “incomplete” after 42 straight months of unemployment over 8%. I shudder to think what he means. Incomplete? Apparently there are still too many people with jobs, too many businesses still trying to make a go of it.

OBAMA: You know, I would say “incomplete,” but what I would say is the steps that we’ve taken in saving the auto industry, in making sure that college is more affordable, investing in clean energy and science and technology and research, those are all the things that we’re going to need to grow over the long term.

By the way, guess what we just learned today? Dingy Harry’s son, Rory Reid, I think this is in a UK Newspaper. Rory Reid, son of Dingy Harry, is involved with the ChiComs to bring a solar energy business, plant, or whatever to Nevada. There is no solar business. It doesn’t exist without subsidies. But even the ones that get subsidies. Look at Solyndra. The business isn’t there yet. Investing in clean energy science and technology and research, that’s like roads and bridges. It’s meaningless. The private sector makes those investments. The private sector is where all that stuff happens. This is delusional. This is pure 100 percent delusion.

RUSH: Now, here’s another way of looking at it: Are you better off now than you were four years ago. Here’s some numbers from four years ago compared to today.

Now, here’s Obama grading himself. Isn’t this rich? The Drive-Bys asked the president to grade himself. Gives himself an “incomplete.” I wonder what his college transcripts would show? We’ve never seen them. I wonder if they’re incomplete? Talk about grades. Doesn’t that kind of open the door to the question? But then, ladies and gentlemen, since when is an “incomplete” something to brag about? What are we doing here? We are choosing leaders. That’s what presidential elections are about. Choosing leaders. This country needs new leadership. This country is absent leadership right now. It hasn’t had any real leadership in a while.

I mentioned earlier the guy at Forbes Magazine, Rich Karlgaard. He saw a New York Times piece on Sunday written by Jodi Kantor, and he posted a piece on Forbes: “New York Times Proves Clint Eastwood Correct — Obama Is Lousy CEO. A Sunday New York Times front page story — New York Times! — might have killed President ObamaÂ’s re-election hopes. The story is called ‘The Competitor in Chief — Obama Plays To Win, In Politics and Everything Else.’ It is devastating.

“With such a title, and from such a friendly organ, at first I thought Jodi KantorÂ’s piece would be a collection of ObamaÂ’s greatest political wins: His rapid rise in Illinois, his win over Hillary Clinton in the 2008 Democratic primaries, the passage of health care, and so on. But the NYT piece is not about any of that. Rather, it is a deep look into the two outstanding flaws in ObamaÂ’s executive leadership: 1. How he vastly overrates his capabilities.”

And here’s a pull-quote from the New York Times story: “But even those loyal to Mr. Obama say that his quest for excellence can bleed into cockiness and that he tends to overestimate his capabilities. The cloistered nature of the White House amplifies those tendencies, said Matthew Dowd, a former adviser to President George W. Bush, adding that the same thing happened to his former boss. ‘ThereÂ’s a reinforcing quality,’ he said, a tendency for presidents to think, IÂ’m the best at this.” 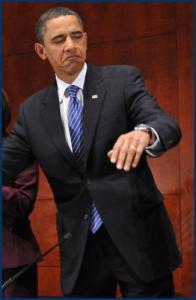 And, “2. How he spends extraordinary amounts of time and energy to compete in — trivialities.”

And again from the New York Times piece: “For someone dealing with the worldÂ’s weightiest matters, Mr. Obama spends surprising energy perfecting even less consequential pursuits. He has played golf 104 times since becoming president, according to Mark Knoller of CBS News, who monitors his outings, and he asks superior players for tips that have helped lower his scores. He decompresses with card games on Air Force One, but players who do not concentrate risk a reprimand (‘YouÂ’re not playing, youÂ’re just gambling,’ he once told Arun Chaudhary, his former videographer).

“His idea of birthday relaxation is competing in an Olympic-style athletic tournament with friends, keeping close score. The 2009 version ended with a bowling event. Guess who won, despite his history of embarrassingly low scores? The president, it turned out, had been practicing in the White House alley.”

The story goes on to quote from the New York Times how Obama is devoted to inconsequential things. Highly competitive in all kinds of inconsequential things. In fact, there’s a quote in the story that two weeks into the presidency he’s telling people that he’s really good at it. Two weeks into office he was running around telling people how much he likes being president and how good at it he is. So Rich Karlgaard here I guess is theorizing the people who read the New York Times are Obama voters. I mean, they are in the tank for Obama. They’re going to read this and they’re going to see that Obama’s devoted to all these trivialities and inconsequential things and not spending any time whatsoever on things that truly affect the country. While everybody thinks he’s got his sleeves rolled up and is working hard on this stuff, this story in the New York Times actually does convey the impression he doesn’t care much.

And, my friends, this is why I have feared that many of Obama’s policies are oriented purposely for the outcome that we’ve gotten. He started the ball rolling. Unemployment, getting worse. Family income, dropping. Spending, up. He started that ball rolling. All he’s gotta do is get out of the way. Health care reform is a massive government expansion, massive government spending, massive tax increases that we haven’t even seen yet. If that isn’t repealed he doesn’t have to do much else to be totally destructive of the foundations of this country as founded.

Breitbart even has a piece on this New York Times story. Ezra Dulis: “Democrats Air Their Frustrations with Obama’s ‘Cockiness’ — The New York Times’ Jodi Kantor airs complaints from loyal Obama associates … ‘He has mentioned more than once in recent weeks that he cooks “a really mean chili.” He has impressive musical pitch, he told an Iowa audience. He is a surprisingly good pool player, he informed an interviewer — not to mention (though he does) a doodler of unusual skill.'”

These are the things he’s telling people in the White House, and they told Jodi Kantor at the New York Times. He’s bragging about how good he is at all of these trivial things. “The article reports Obama’s associates characterize this bluster and political zeal as ‘cockiness.’ Further, Washington Democrats say he is all too eager to offer unsolicited advice — on handshakes, writing, and parenting, among other topics.” Well, that follows, doesn’t it? Mr. and Mrs. Nanny thinking nobody knows how to do anything?

Dulis says, “Obama reportedly dedicates considerable time to practice, no matter how trivial the pastime,” and talks about the golf and the card playing and the bowling. And that Obama even “rates and ranks others around him,” always elevating himself to the position of superiority. Here’s how the Breitbart piece ends: “Despite a strong push to negatively define Mitt Romney, Obama finds himself neck and neck with [Romney] two months before the election — even falling behind in some polls.

“As the November ballot draws nearer, he will need to rely heavily on his personal likability to draw independent voters. The New York Times and allied Democrats airing these grievances … is a serious problem for” somebody who needs to rely on likability, because as the story points out: He’s not all that likable. You’ve got his own so-called associates in the White House talking about how irritated they are at the way Obama conducts himself inside the White House with this hyper-competitiveness on trivial things. He rubs people the wrong way.

Not cool but, rather, kind of chilly. Kind of cold.

RUSH: So here we have a guy bragging about all of these things. After two weeks, “I like being president. I’m good at it!” This just as an example. HR asked me during the break, “Is there anything in that story about people in the White House liking the guy?” No. There’s only a reference to Obama’s likability in the polls, but there’s nothing about Obama being liked inside the White House. But what kind of people do these things? If you work with somebody or somebody in your neighborhood brags all the time, doesn’t that rub you raw?

Here’s a guy bragging about everything, insisting he can win at anything, knowledgeable about all things, gives you advice on how to properly shake hands. What kind of people have this kind of personality? Look around the world. Look at the so-called leaders who hold themselves out this way and ask yourself: Do they lead democracies or do they lead tyrannies? You don’t hear Romney described this way by anybody. Have you ever heard Reagan or George W. Bush described this way by anybody that knew them?

Furthermore, this is a guy who is good at nothing. He stinks at golf! Have you ever seen him throw a first pitch at a baseball game. It’s embarrassing, folks. You want to give him a shopping cart and say, “Here, go pick up the groceries.” He’s actually good at nothing. He’s not good at being president either.