The Democrat War on God

RUSH: Deborah in Jackson, Mississippi. Welcome to the program. I wanted to get you on the program with 45 seconds. Hi.

CALLER: I wanted to know if you liked the prayer that Cardinal Dolan gave at the end of the convention.

RUSH: You know what I thought when I saw that prayer? I thought, “Democrats watching are getting mad,” and then I thought, “There’s no way we will see this at a Democrat convention.”

CALLER: And you know he was asked, he let the Democratic Party know that he was going to appear because he didn’t want to come off as being partisan or political.

RUSH: I just read that the Democrat Party stripped the word “God” from their platform. I was surprised it was in there.

CALLER: He used a lot of excerpts from the Declaration — 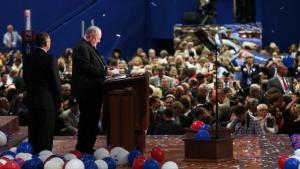 CALLER: — and I think that really in order to be nonpartisan he should say the exact same prayer.

RUSH: Now, I’m told — and I don’t know that I believe this — that Reverend Wright, Jeremiah Wright, is going to give the benediction at the Democrat convention. (sighs) He’s the spiritual mentor of Obama. I think after this convention everybody’s going to understand why. No doubt about it. No, that’s what I’m told, that Reverend Wright is giving the benediction. Gosh, I hope that’s true. Let it be! Let it be!