RUSH: Andrew Stiles writing here in the Washington Free Beacon: “Obama Economy Leaves Women Behind.” By the way, there’s an ABC Washington Post poll that came out yesterday about how Obama is losing women now in significant numbers. The ABC people were shocked and a little distressed reporting the poll and its results. There’s already a significant gender gap with men. Romney is way ahead, up like 9 or 10 points with men, which is standard.

But Obama is starting to lose ground with women.

Everybody was stunned by this.

Here we’re at the first day of the convention. They couldn’t believe it. The Hill poll yesterday found the majority of people don’t think Obama deserves being reelected. It’s not a pretty picture.

RUSH: “The sluggish economy under President Obama has been particularly hard on women. 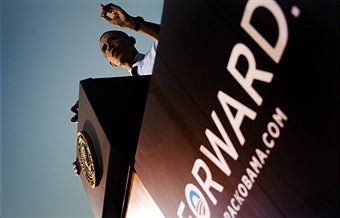 “Nearly six million are currently unemployed, more than 400,000 have lost their jobs, and poverty rates among women have soared to record highs. Since Obama took office, the unemployment rate among women has jumped from 7% to 8.1%,” and these are government numbers, “according to the Bureau of Labor Statistics. Young women have fared even worse. Their unemployment rate has risen from 12.5% to 14.4% since 2009.

“The jobless rate among single women, a demographic the [regime] is targeting, has nearly doubled compared with pre-recession levels.” That’s the real world; that’s what people really know. And there’s no speech and no two hours of lies and repositioning last night that’s going to make up for that, particularly when a maximum of 20 million people in a country of 300 million watched it.

RUSH: I just referenced it in the closing moments of the previous Hall of Fame hour. According to that poll, Obama has a disapproval/approval rating of 46/50 with women (46% approve, 50% disapprove). That is the lowest in the ABC poll since Obama took office, and that is after all the money they spent on the War on Women. All that stuff with Sandra Fluke was for nothing. All this stuff with the War on Women and buying birth control pills.

Ladies, do you understand, there’s no president that can do anything about abortion? There’s no elected official that can do one thing, legally, to stop abortion. It’s the law of the land. It’s called Roe v. Wade. The only thing that can happen is the Supreme Court change (and that’s not going to happen anytime soon). This constant ginning up of fear, as though the right to an abortion is going to be taken away? That’s the most important thing that the Democrats think they have.

They’ve got such a task. They have got to go so off-the-wall, fringe-extremist left to keep their base intact. And then when the rest of the country starts watching the convention, they have to start lying through their teeth about what they believe. At the end of last night, I wouldn’t be surprised if these people had no idea who they are. I couldn’t live the way they have to live. The first two hours of that convention, they say whatever.

Abortion, all the time, anywhere, anytime!

Girls, get them now before the Republicans win!

They start comparing the Republicans to Nazis and have to say all that cockeyed stuff to keep their base intact. And then, at 9 p.m., you have to start lying about what you believe so the rest of the country doesn’t reject you. And meanwhile, or all the while, the country is rejecting you. And that’s what the latest polling data proves. It’s what the latest polling data indicates. It’s amazing. And the highest… Let’s put it this way:

The lowest approval rating with women in the ABC poll (and that’s Washington Post, too) since Obama took office after all that money spent on the War on Women.