RUSH: Chris Matthews. I don’t have the audio. Cookie, don’t go get the audio. I’m not lifting my ban on audio from MSNBC.

Do you know that MSNBC has not yet run any footage of the vote on God? And there’s something else that’s happened at this convention that they have acted like hasn’t happened. There’s one other big thing. It’s not quite as big as God being booed, but, anyway, I’m not gonna play anything from this network. But Chris Matthews… This is an illustration of just how irrationally these people are attached to Bill Clinton.

Of course, Clinton comes out as a Democrat at the convention and gives what they all think is a great speech and, “That’s it! The election’s over. The country loves Clinton!” Of course, whoever Clinton endorses usually loses. Clinton’s impeached. He was disbarred; he lost his law license. He admitted perjury. The stained blue dress, Monica Lewinsky! This guy is held up as the greatest living icon the Democrat Party has. It’s gotta make John Edwards jealous. John Edwards says, “What do I have to do to get respect in this party?” And Gary Hart, where’s he? “How come I’m left out of this mix of great Democrats?

“They’re doing a tribute to Ted Kennedy, a tribute to Bill Clinton. What about me? And what about Edwards?” Edwards lives in North Carolina! I’ll bet he can’t get within ten miles of the convention hall. He lives there. Can you imagine what Edwards is saying? “What do you have to do in this party to get heralded?” Clinton’s got nothing on Edwards, but it seems like Edwards and Gary Hart(pence) get zip! Clinton and Kennedy own it. They do a convention where it’s us conducting a War on Women! (chuckling)

Anyway, Chris Matthews probably had to wear an athletic supporter last night to hide the bulge. After Clinton finished, Chris Matthews said, “Years from now, we may look back at tonight and remember Bill Clinton’s speech as one of the greatest in convention history. No one, including Obama, has made a better case for Obama than Bill Clinton did tonight.”

But he wasn’t through.

“Matthews praised Clinton’s incredible gestures during the speech towards the Obama family. ‘They’re gonna teach those gestures in school someday.'” What the hell’s he talking about, Clinton’s bony finger? If I were a woman, that bony finger would give me chills. If I were a woman and I see Clinton waving around that bony finger, I say, “Get me away from here!” Well, I’m sorry. Then they got Chris Matthews wearing the athletic supporter to hide the bulge under and behind the desk, and he’s still not through. 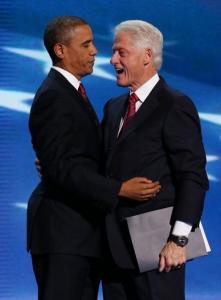 I don’t know if Cookie even rolls on MSNBC anymore. Cookie, if you can find that, I’ll lift the ban on this one special occasion, if you can find it. I don’t want you have to go buy it if we don’t have it. It’s not worth that. But this is the kind of irrationality that the Democrats have attached to this guy that makes them think the election’s over just ’cause this guy gave an overly long, boring speech last night.

He made the case better for Obama than Obama?

Stop and think of that!

Four years ago Obama was The Messiah, The One! “Never anything like him!” Now, in four years, he’s so small and insignificant that they’re worried. “You know, he does so much better outdoors than indoors — and Clinton, he made a far better case for Obama than Obama makes for himself, and then after he did that, he knows what to do with the Martians. He’d get a Martian in bed in five minutes.” Chris Matthews says, “I love the guy!” Who knew that Chris Matthews was fantasizing about doing it with Martians?

RUSH: All right. We have it, Chris Matthews, while wearing an athletic supporter to hide the bulge behind the desk on the anchor chair, the seat there at MSNBC, just having a verbal orgasm over Bill Clinton’s speech.

RUSH: That was after he said, “Years from now we may look back at tonight, remember Bill Clinton’s speech as one of the greatest in convention history. Nobody, including Obama himself, has made a better case for Obama than Bill Clinton did tonight.” Clinton didn’t do that. Now, Clinton wanted everybody to think that. Clinton made a case for Clinton last night. Here it is again, audio sound bite number 31.

RUSH: Now, you have to ask yourself a question. You’re Chris Matthews, you’re looking at Bill Clinton, what in the world are you thinking? What must be on your mind if you’re thinking about doing it with Martians?

This guy is doing convention coverage at PMSNBC. It’s just another illustration out there of the irrational attachment they have to this guy. And I think that this over-the-top, “Oh, it’s over now. Clinton. This election’s over. That’s the greatest speech ever.” They know they’re in trouble. What do you mean, the election’s over? You mean it wasn’t in the bag going into this convention? You mean Obama doesn’t have this in the bag? It took Obama being spoken for by Bill Clinton? It took Bill Clinton to put Obama over the top? And that makes you so excited, you start fantasizing about Clinton doing it with Martians inside of five minutes, while you’re wearing an athletic supporter on the MSNBC set to hide the bulge?