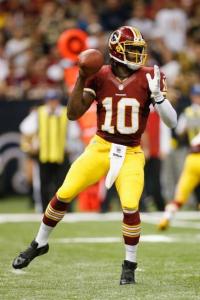 It’s the equivalent of the lug head husband switching channels every five seconds with the remote control. Women hate it! They hate the RedZone channel. Really, a fumble, a turnover — a highlight that might last three seconds — you see it! Every time a team gets in the RedZone, they stop and go there. If there’s a touchdown, if there’s a field goal, if there’s an injury, you see it. You see everything that happens with no commercials. They never break for commercials. No commercials.

It’s only offered on DirecTV. A couple of other places, too. And it’s rapidly taking the place of watching full-fledged games because you see everything in every game. It’s for the Sunday afternoon and late games. Not the Sunday night games, not the Monday night games, just Sunday. Anyway, this RG3 against the Saints? This guy was fantastic, Snerdley. This guy was composed. He did it all. He was able to throw. He was able to run. He was not a one-trick pony.

He was poised, he was composed, he was throwing on his back foot. He looked like a five-year veteran, RG3 did. He really, really did. And playing in the ‘dome, in the Superdome. It’s his first game, on the road. This Redskins team is entirely different with this guy as the quarterback. Now, Snerdley said, “What happened with the Jets?” Why were you so surprised at the Jets? Tell me the truth: Why are you surprised at the Jets? Why? Why didn’t you think they could score?

See, this proves my point.

Bo Snerdley, our Official Obama Criticizer, is supposedly as immune to media attempts at mind manipulation as anybody. And yet the sports media had him convinced that the Jets were pathetic and horrible because they’re doing cartoons of the Jets as clowns on the back page of the Post. They didn’t score a touchdown in the first three preseason games with the starting unit. The starting unit didn’t score in four games. They have everybody believing that Sanchez is horrible and that Tebow is gonna make the team even more confused.

And yet they came out yesterday and they had a blowout of the Buffalo “Bulls.” As they say in western Pennsylvania: “D’Buffalo Bulls.” Literally blew ’em out. When are you gonna learn to ignore what the media says? When are you gonna learn to ignore preseason? See, this is… I’ll tell you, this is really a worthwhile exercise. (interruption) No! No! It’s not hard to ignore preseason. All you have to do is listen to me or believe it when I tell you that the score in preseason is irrelevant. The coaches don’t care.

In preseason, the coaches don’t use 10% of the playbook. They don’t game plan. They do nothing. They don’t give anything away for the regular season. They try to get everybody safely through it without anybody getting hurt. (That often doesn’t work.) You can’t judge the regular season by the preseason in any way, shape, manner, or form. Peyton Manning. You know what, folks? They ought to just rename this the National Manning League and be done with it. The NML. That’s just it.

So Emmett Burns, the state elected official, sends a letter asking them to shut him up, asking him to not talk about it for moral and cultural reasons. He says there’s no place in football for this stuff, and he sent a letter to the owners, Steve Bisciotti: Will you please shut the guy up? Well, all hell has broken loose against Emmett Burns. “Who are you to deny freedom of speech? You ever read the Constitution, you idiot?” That’s what the reaction to him is. He’s taken it on the chin every…

The punter of the Minnesota Vikings, a guy named Chris Kluwe, wrote a blog post that was so obscene, it can’t be quoted. But everybody loves it because it excoriates Emmett Burns as being an absolute toad and an idiot. He says things like, “Mr. Burns, can you please explain to me how two gay people getting married is gonna hurt you? It isn’t gonna hurt you at all, not one thing — except it’s gonna make them more complete citizens.”

So people around the world in the pro-gay marriage movement now love Chris Kluwe of the Minnesota Vikings. His first letter, it is racked with profanities. CNN today said they couldn’t quote it. They wanted to read it and couldn’t quote it, or maybe it was Fox. I forget which. I read it over the weekend. It is profane. It’s funny; it’s humorous. The guy’s got a way with words, and this Emmett Burns guy is black, and everybody’s dumping on this guy.

So I’m just saying: If Peyton Manning… Oh, it was CNN, ’cause they had Tiki Barber on. Tiki Barber said (summarized), “It’s only a matter of time. This new generation gets it, gay marriage. We’re gonna have openly gay players in the NFL. They’re gonna come out; we’re gonna get with it. This new generation’s gonna take care of it. Everybody’s gonna get up to speed. It’s gonna be fine, and then the NFL…”

Okay, that’s it. I knew this was gonna happen, folks. And then CNN’s doing stories on paralyses and head injuries in football. I knew it. I knew all this was gonna happen. So, anyway, if Peyton Manning comes out for gay marriage, then it’s gonna be the National Manning League, with Eli as vice president and Archie as secretary of state or whatever he wants. Their mother is gonna be whatever she wants, and Goodell’s gonna be waving from the train station.

Say “NFL Manning Up.” Gay marriage in the NFL? Fine. I don’t care. You know, the next up will be the transgendered players and what to do with them. That’s fine. Do all the social experiments you want on the players; just leave the cheerleaders alone, please. If I may just make one request, from a former big-time fan: Just leave the cheerleaders alone. That’s right. The first female official! I don’t know what game she officiated, but that’s right.

RUSH: Yeah. By the way, I’m told that Cortland Finnegan used to play with the Tennessee Titans and is now with the St. Louis Rams. I hear he staged a fake fight in the game with the Lions in order to suck the female referee into breaking it up. She’s the line judge in the game, and apparently the players got together and faked a fight. She got tricked into breaking up a fake fight. That’s what I’m told. I don’t know. (laughing)

Cortland Finnegan and Stephen Tulloch. Tulloch is the Lions, Finnegan with the Rams. They both used to play for the Tennessee Titans. After the game they faked a fight with smiles on their faces, and the first female ref is pictured running in to break it up. Her name is Shannon Easton. She was the line judge, and there’s a picture of it. She’s running to break these guys up. They’ve got their hands on their throats, and they’re laughing themselves silly. It’s obviously a fake fight, and she’s running in to break it up. Taunting one of the new refs.

RUSH: Look. I was not making fun of the NFL referette, Shannon Easton. I’ve got it right here. She was a line judge for the Rams-Lions game yesterday, and I’m just telling you. I have the picture of Cortland Finnegan of the Rams and Stephen Tulloch. They faked a post-game fight and she’s running in there to break it up, and they’re laughing themselves silly while she’s running in with a, “You can’t! Stop! Stop!” look on her face.

Here, hang on a minute. I’m going to zoom in and I’m gonna show you. I turned the camera off so you don’t actually see the zoom. Come on, keep zooming. Zooming. I think we’re low on battery. I think I got it here. There. Okay, can you see that? That’s still not close enough, see if I get tighter. Still zooming. Thought ought to do it. I don’t know about the focus, but, okay.

There’s Cortland Finnegan on the left and Stephen Tulloch on the right. He’s laughing. That’s the referette, Shannon Easton, a line judge. It’s after the game and she’s going there to break it up. That’s from DeadSpin.com. I, frankly, don’t think the replacement refs did a bad job. I mean, there were a couple or three errors that they made, but the real refs gotta be looking at this with a little different perspective, because the replacement refs did not do too badly.

RUSH: Leon in Cincinnati, I’m glad you called, sir. It’s great to have you on the EIB Network. Hello.

CALLER: Hey. How you doing?

CALLER: Before I get to my point I wanted to say something real quick. Friday you mentioned something. When discussing black people, you used the term “black.” I appreciate that, because I hate the term “African-American,” and believe it or not, a lot of people like me believe in the term. We’re Americans. We just happen to be black. But I wanted to thank you for that.

CALLER: But to get to my point is, I disagree with you on the NFL. I think that training camp is to get these guys up to speed, playing at NFL speed. It’s like with the college players. You know, all those college players, they have the ability to be in the NFL, but can they play at that NFL speed?

CALLER: And with the pros themselves, the guys that are there, after sitting out for a few months, can they keep up?

RUSH: I can see how you might have been confused by what I said because Mr. Snerdley was, too. He said during the break, “How can you say that?” What I meant to say was that coaches don’t care about the score in preseason games.

RUSH: They, of course, care about how people play. It’s how they determine who ends up on the team. Now, the starters don’t play much in preseason games. They try to keep ’em injury free. And it’s largely to find out who among the new recruits has what it takes to make the final roster.

RUSH: But it’s the final they don’t worry about. So when the Jets don’t score a touchdown, don’t score any points in a preseason, that really is not that big a concern for the coaches. Not scoring a touchdown probably was a concern, but of course the starters were not on the field that many times for an opportunity to score. But all I meant to say was that the final score of preseason games is irrelevant. It doesn’t matter to the coaches. You’re exactly right: Preseason is to find out who can play at that speed. Even college first-round draft choices, the first thing they say every year is they can’t believe how much faster the game is, and how good everybody is.

You know, there aren’t any East Washburn U’s on the schedule.