Caller Nails It! Obama Shot Before He Aimed When He Overthrew Mubarak


RUSH: Here’s Yvonne in El Paso. Yvonne, you know, I fly over El Paso every time I go to LA. The route takes us right over El Paso. As we go over El Paso, I think of Marty Robbins.

CALLER: Oh, yeah! One of my favorites.

CALLER: Well, welcome to where the Left Coast starts, actually.

CALLER: We’re a highly Democrat place. Oh, Rush, I’ve been trying to talk to you for so long.

CALLER: I’ve been beginning to think that you were discriminating against us “white Hispanics.”

RUSH: Don’t even think that, much less say it.

CALLER: I know. I love you. But anyway, to get to my point: You know, if the 60 Minutes reporter was any kind of self-respecting journalist, he would have asked Obama — you know, talk about shooting before aiming — “Weren’t you the one that was supporting dissidents in Egypt and helping with getting rid of Mubarak without knowing who they were there and in Libya?”

RUSH: Another brilliant point from a female caller in the audience in this program!

RUSH: That is an excellent point.

We touched on it a little bit yesterday.

All of this happened because Obama encouraged it. He even tried to equate this Arab Spring and the uprising in Tahrir Square with his 2008 campaign! They even had Nic Robertson of CNN running around asking the Muslim Brotherhood guys what they thought of Obama. Cookie, get that one from the archive. We gotta go back and get that one, ’cause you’re exactly right. You talk about aiming before you’re shooting? Obama is the guy who gave us this in Egypt by supporting it long before he knew what it was. That, I think, is open to debate. I think Obama knew who the Muslim Brotherhood was, and I think he preferred them over Mubarak, but that’s another thing.

RUSH: Now, I want to go back to the archives again, to the Grooveyard of Forgotten Sound Bites, ’cause I think it’s important, based on the call that we had from El Paso. The woman made the point that the Muslim Brotherhood exists because Obama pretty much supported ’em. Obama wanted to be rid of Mubarak. And if you remember this whole Arab Spring happening, Tahrir Square in Cairo was a hubbub of activity. The anti-Mubarak forces were going nuts, and it was only a matter of time before Mubarak would be forced out. At the time, if you recall, we were told, well, the military’s gonna end up running the country because they do now, and whoever the military sides with is whoever is gonna run the country. And at that time the Muslim Brotherhood was — well, to those of us who knew, they were the major player. They were the ones behind all this.

But to Obama and the media, the Muslim Brotherhood… in fact, one of Obama’s national security advisers was on television characterizing the Brotherhood as the nice faction of militant Islam; the guys you can do business with; the guys at the corner; the moderate element. They’re the good guys. If anything is gonna happen in Egypt with the Muslim Brotherhood, that’s cool, because they’re the good guys. I remember being frustrated as I could be at that narrative and spent a lot of time on this program attempting to inform you otherwise, that the Arab Spring was not a democratic outbreak.

In fact, there were a lot of us having problems because some of the conservative media people, people on our side, were falling for this, too. They thought this was the outgrowth of some great Democracy Project. That the Arab spring was spreading the democracy of Iraq further. The tentacles were spreading out throughout the Middle East, and it was starting to show up in Egypt, and from there it would sweep to Syria, and the problem with Israel would minimize, and a bunch of us at the time were warning, it’s the exact opposite. This is an uprising by Al-Qaeda types, by militant Islamists, by Islamist supremacists whose objective in all of this is to take over the Middle East and get rid of Israel. That’s what was happening.

Obama was trying to convince people that this was an outbreak of democracy akin to his election and campaign, and it’s at that point we want to go back in time to our audio sound bites. We’ve played these before, you’ve heard them, you know them, you love them. But I think it’s important, folks, I want people who are new to the program to understand context as much as possible, to be able to understand points that I am asserting here so they get the context of it, to illustrate what I just said, in fact.

Nic Robertson of CNN was in Tahrir Square on February 11th, 2011. This is after Mubarak has stepped down from power. The Brotherhood has not yet asserted itself. The military is still running the show. And it is assumed by all the media there that this is wonderful. We got rid of a tyrant. We got rid of Mubarak, and now Egypt can be free. Egypt can be a democracy. And it was BS then, it’s BS now.

ROBERTSON: Achmed, you’ve been here, down here on the Square for many days. The United States and the international community. You’ve just listened to President Obama saying that America will support Egypt if it wants help and assistance, and hopes that there will be a good transition for jobs for the young people. What would be your message for President Obama? 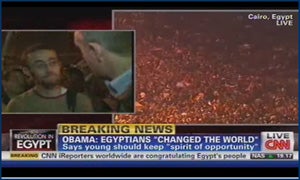 ACHMED: We don’t know, actually, who he supports. He serves for his own purposes, and the Egyptian people serve for our freedom and democracy. Any democratic country should see for the people, not for its own purposes.

RUSH: Okay, so Nic didn’t get what he wanted there. He’s looking for man on the street to say, “Obama’s our savior! Obama’s our salvation! Obama made this happen! We love Obama!” Obama had just made a speech talking about jobs for Egyptians and reviving the middle class. Sound familiar? Nic Robertson was doing Obama’s bidding over there for the consumption of the American news public.

He wanted viewers back home to see that the Egyptians loved Obama and supported Obama, and that Obama in fact was largely responsible for all this outbreak of love and great news in Egypt. But he didn’t get what he wanted. Not one of the people he spoke to wanted to credit Obama for any of this. Here’s the next bite. That was Achmed. So now Nic Robertson moves down the street and finds Mustafa.

ROBERTSON: Mustafa is joining me now. We just heard President Obama say that he wants to extend, eh, support and assistance to Egypt and Egyptians if they want any, and he hopes that there are more jobs for the young people in the future. What’s your message for President Obama?

RUSH: “President Obama? Who the hell’s he? We don’t care about President Obama. He’s got nothing to do with this! This is our revolution, and he’s not getting credit for it. I haven’t seen him over here.” So Nic Robertson is beside himself now. He’s just been stuffed by Achmed. Now Mustafa has told him he’s wasting his time. So he now continues here, and he tries again with Mustafa. 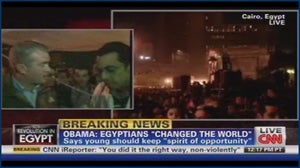 MUSTAFA: Well, actually President Obama’s views were kind of conflicting during the last week, but now he’s saying that he’s supporting the change.

RUSH: So Mustafa said, “Look, we don’t know where he is. Whatever day it is, whatever he thinks is going on here is what he’s said in order to make it look like he’s in charge here. But he hasn’t had anything to do with this.” So poor old Nic has struck out here with Achmed and Mustafa. But, you see, the reason I want you to hear this again is because this was an attempt by the media to make all of this in Egypt a great credit to Obama.

“Obama made this happen! Obama is the Father of Democracy! Obama is cleaning up all the corruption of the Middle East.” I’m just saying that if, back in 2011, CNN and these people were going out of their way to try to convince people that Obama was responsible for this, then by God, where are they right now? If Obama’s responsible for the Muslim Brotherhood, if Obama supported their “jobs program for the young people” (if you can believe that), then where are they now?

Is it logical to assume this? If Obama was responsible for all of this revolution and wonderfulness that happened, then doesn’t he have some culpability? I’m just asking this if you’re CNN, if you’re the media. So Nic at CNN, Nic Robertson, has realized here that it hasn’t gone the way he’s intended. Achmed and Mustafa both said, “Obama? Not a factor.” Now, Nic realizes that his audience at CNN is so dumb that he can tell them that they didn’t see what they just saw, and that’s exactly what he does…

ROBERTSON: The view from here is one of very happy to now hear that President Obama has swung behind the people.

RUSH: Not one person that Nic Robertson spoke to said that they were “very happy to now hear that President Obama has swung behind the people.” They said just the opposite, and yet Nic Robertson (impression), “The view from here is one of very happy to know here that President Obama swung behind the people,” which was the whole point of the story, the whole point of the report. They didn’t actually get that, but Nic knew that he could tell his audience: “Don’t believe what you just saw. Believe what I’m telling you here.”

So at the end of the record, the people of Egypt loved Obama.

Well, here we are.

I leave it for you to answer.